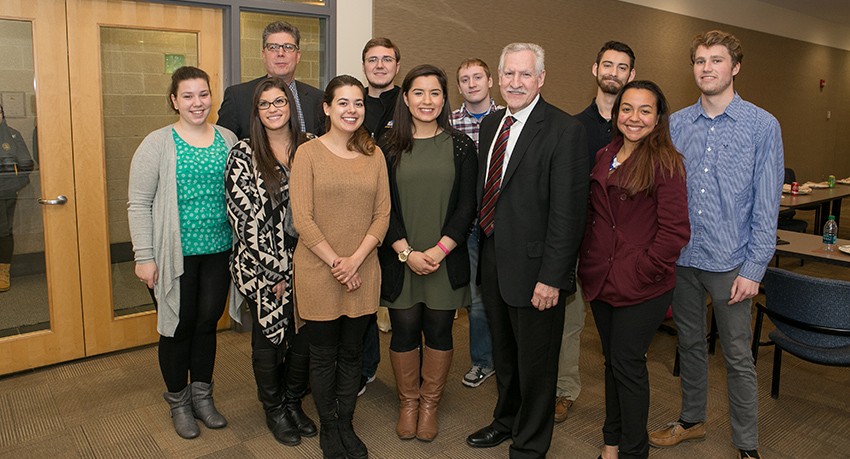 Massachusetts Commissioner of Higher Education Carlos Santiago’s visit to Worcester State University on Tuesday, April 12 included a luncheon with student leaders in the Seven Hills Lounge of Wasylean Hall. WSU was the 19th campus he has visited of the 24 public state university and community colleges​ in the commonwealth.

Santiago stressed the importance of the students’ education because the vast majority of Massachusetts residents attend one of the state’s 29 public institutions and a majority of those students chose to continue living in the state. While Massachusetts is “one of the more educated states…in terms of the percentage of our population that has at least a bachelor’s degree,” the state is facing a wave of retirements by a third of its workforce, he added.

“We’re trying to figure out how we replace these very smart people who will be retiring and how we build the cadre that really serves the future of the commonwealth,” Santiago said. “It will happen at institutions like Worcester State.”

The Department of Higher Education also is looking at many present-day college student issues, including affordability, campus security, and transferring from one college to another, he said.

To learn more about the student leaders, Santiago asked: “What got you to this institution? What was the moment or the person who made you decide that this is where you wanted to be?”

Each student’s response was unique. Their answers ranged from specific program offerings to taking a college course through dual enrollment to civic engagement opportunities to WSU’s affiliation with the Worcester Center for Crafts. But several touched on the fact that they came to realize that a Worcester State education is much more affordable than that of private institutions and the quality of their education is richer.

In Mariana DosSantos’ case, she came to WSU after attending a private college in Massachusetts and Quinsigamond Community College. She left her first college because it was too expensive. As she made her decision to leave the first school, “I heard a lot about Worcester State.” She continue to hear “amazing things about Worcester State” when she was at QCC. When she finally came to visit the WSU campus with her mother, they both loved it and she enrolled for the 2015 spring semester.

“The opportunities that I’ve received here I didn’t have at the private institution,” said DosSantos, who moved to Florida from Brazil when she was six years old and is the first in her family to attend college in the United States. Those include studying abroad in Barcelona last fall and recently traveling with other student leaders to Washington, D.C., to lobby for more funding for public higher education.

“The faculty here really do care,” DosSantos said. “My advisor is incredible. The Criminal Justice Department, for me, has been life-changing just because they really do go the extra mile.”

Following the luncheon, Santiago stopped in to the Celebration of Service to take a moment to praise WSU students, faculty, and staff their community involvement.

“The commissioner heard from both student leaders and those who learn by serving,” said WSU President Barry Maloney. “I told the student service awardees that not only are they helping others, service provides you an opportunity to learn about yourself. I feel confident that the commissioner learned that we have great students at Worcester State.”

Santiago also met briefly with the Board of Trustees, Worcester State Foundation Board, and area business leaders. 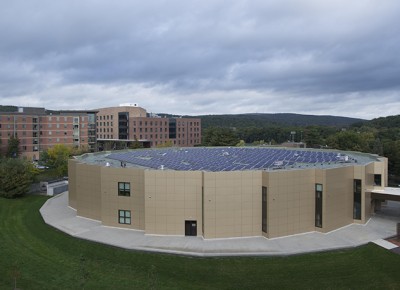 When a light bulb burns out, Bob Daniels reaches for his phone. "I will not change a light bulb around here unless I talk to someone from National Grid because chances are they're going to give me . . .