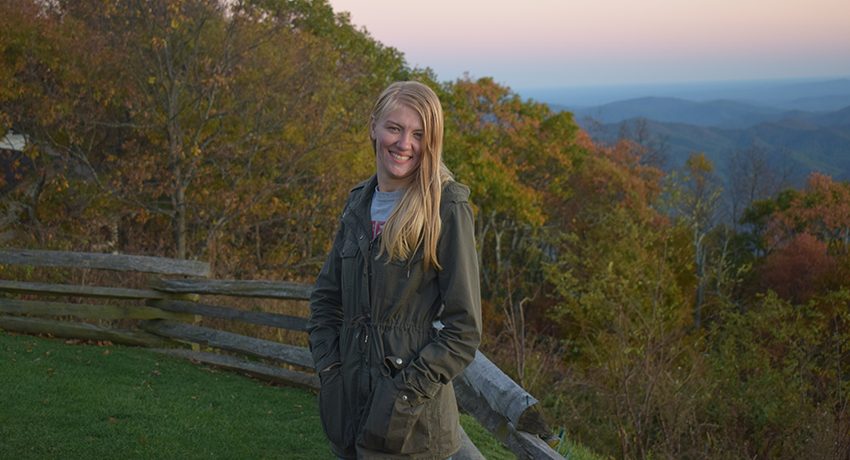 Senior Samantha “Sami” Vayo, who is deaf and has cerebral palsy, will celebrate two major accomplishments in the next three months. She will participate in commencement this month and compete in the Special Olympics USA Games in July.

Vayo is excited about both, as they mark tremendous milestones. They represent the achievements she has worked patiently toward throughout her life.

Although she must take two summer courses to complete her bachelor’s degree in communication, walking at commencement on May 19 will be the culmination of 10 years of hard work—with the last two being at Worcester State. She also attended Rochester Institute of Technology and Quinsigamond Community College, where she earned an associate’s degree.

“Since I got here, there’s been tremendous support, and now I’m going to graduate!” Vayo says through an interpreter. In particular, Assistant Dean and Director of Student Accessibility Services Fran Manocchio and Professor of Communication Julie Frechette, Ph.D., “have been exceptional people, and they’ve really been trying to help me succeed here and graduate.”

Frechette says that Vayo “always carries a positive attitude” and enriches class discussions with her personal and unique perspective.

Vayo has shown similar dedication to Special Olympics Massachusetts—competing in her favorite sport of gymnastics as well as basketball, softball, track, bowling, and soccer. She first joined the state’s Special Olympics team as a gymnast when she was seven. This is her 20th year competing in the state games.

Her parents enrolled her in a gymnastics when she was five to see if it could help improve her balance skills and ability to walk. “I fell in love with it,” she says.

The weekly classes may have helped her defy predictions by the medical community about her quality of life. “When I was little, the doctor told my parents that I’d never walk, but look at me now!” she says.

Vayo trains for the Special Olympics every Saturday from October to June. This year, she expects training to continue until 50 members of Team Massachusetts go to Seattle for the national games. She will compete in the floor, bars, balance beam, and vault events.

She and Samantha Berndt of Rutland are the only gymnasts on Team Massachusetts. The state delegation has one other deaf person.

“For me, competing in the Special Olympics is fun,” she says. “I enjoy it.”

Vayo is no stranger to persevering to reach her goals. As she worked toward a four-year degree, she found that language was her biggest challenge.

The Student Accessibility Services Office provides her with an interpreter for classes, meetings with her academic advisors, and other events on campus. She also has been a client of WSU’s Writing Center, which is run by the English Department.

American Sign Language and English are very different, Vayo says. “But the good thing is a lot of people can understand what I write, even though it’s not perfect English.”

Vayo encourages those in the “hearing world” to be more patient and “make the effort to communicate” with her and others who are deaf with gestures and writing notes back and forth.

It’s advice Vayo has learned firsthand and has come to live by.

“My whole college experience, really the whole thing, is don’t give up,” she says. “Be resilient, be stubborn, and don’t give up!”

Update: Vayo brought home four medals and one ribbon. She signed the national anthem three days in row at the gymnastics competition. Her results were: 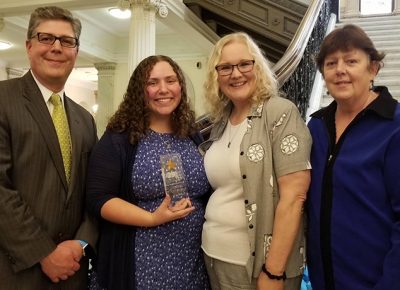