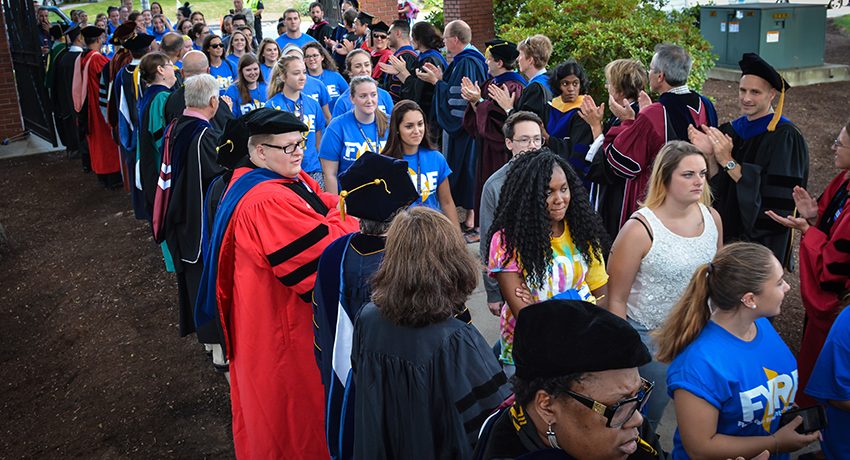 “The completion of that journey is when I see every one of you walk across the stage of the DCU Center, obtaining your degree,” President Barry M. Maloney said during a brief speaking program in Sullivan Auditorium that followed the students’ ceremonial entrance.

Until that time, “I welcome all of you to your new home, Worcester State University,” Maloney told the group, which included first-year students as well as new transfer students.

Faculty, staff, and members of the administration, dressed in formal academic garb of flowing color-trimmed robes, velvet tams and tassels, lined both sides of the walk just inside the gates and greeted the incoming procession of students with applause and welcoming smiles.

“It was absolutely amazing,” first-year student Brittany Marchetti of Providence, R.I., said. “It was so cool. Seeing it like that makes you think your dreams can really become a reality because you usually only see that when people are actually graduating.”

Brittany’s sister, Brianna Marchetti, also said the student procession gave her an advance taste of how it would feel to graduate. (Brittany and Brianna are two-thirds of a set of triplets. Their brother, who rounds out the set, is not a WSU student.)

“It was just an amazing experience seeing teachers clapping for us,” Brianna said. “Just seeing that was so surprising. It was really moving and made me feel kind of special.”

The sisters are among this fall’s 1,426 new WSU students. It seemed most of them attended Convocation, turning the auditorium into a bright sea of blue with many students wearing the school-color First-Year Residential Experience t-shirts they had been issued on move-in day Monday.

The Sullivan Auditorium speaking program that followed the procession focused on welcoming students and encouraging them to take advantage of the many opportunities WSU has to offer.

“Those of you who have transferred here from other institutions, you have found your way to your college, your home, and you will forever forward be Lancers,” said Associate Vice President for Academic Affairs Henry C. Theriault, Ph.D. “You have all chosen this institution and it will play a significant role in your lives”

Theriault said Worcester State can be a transformative experience for students as they discover new things about themselves and the world and develop their intellectual abilities in new directions. “I know many of you hope to have your own impact on the world, and Worcester State is a great place to start,” he said.

It is a goal of faculty and staff, Theriault said, to ensure that first-year students are on track to graduate in four years. “While we may want to enjoy your company for many more than four years, we understand you would rather be launched on your career paths than to be paying extra years’ tuition,” he said, with a smile.

President Maloney extended a special welcome to WSU’s 515 new transfer students. “We couldn’t be happier that you decided Worcester State would be the next stop on your career path,” he said. “Whether you are with us one year, two, or more, it is my hope that you will forever forward identify as a Lancer…All of you have joined a community of scholars, a community of not just students, but also faculty, staff and alumni—and all of us are invested in your success.”

Monica Bhakhri, Student Government Association president and Class of 2018 chairperson, told the new students their academic success comes first and foremost. “How well you do these next four years will impact what your first job will be, your starting salary, and so on,” she said. “So it’s important to remember why you’re here in the first place—to earn a degree in something you’re passionate about.”

Bhakhri told the students to turn to their professors when they face challenges—academic and otherwise. “The professors at WSU genuinely want the best for you,” she said. “They’re some of the most caring and thoughtful people you’ll ever encounter.”

She suggested that students get to know their teachers during office hours to form a lasting connection. “There have been numerous times throughout my years here that I’ve turned to several of my professors for advice and wisdom, even though I haven’t taken a class of theirs since freshman year,” she said.

Jose Medina, who graduated in May with a degree in criminal justice, told the students that it was important for them to get out of their comfort zones and challenge themselves. “Most of you will be spending the next four years here, so make the most of them,” he said. “Get involved—commuters, that means you. Get to know your fellow commuters and the residents. You never know who is going to be a lifelong friend.”

That sentiment was echoed by the faculty speaker, Associate Professor of Biology Sebastián Vélez, Ph.D. “What is it that makes Worcester State such a great place to study? First, you will find out how great your fellow students are,” he said. Some of those fellow students “will end up being your friends for life.”

Vélez urged students to also take advantage of the considerable expertise of the WSU faculty. “These days you hear a lot about not listening to those who live in the ivory tower and are experts…and about trusting your instincts and your gut,” he said. “I’m here to tell you that that’s nonsense. The only way you can learn to do anything that is really worth doing is to learn what others already know, and then improve upon that.”

Vélez likened learning as much as possible from faculty to standing on the shoulders of giants, a takeoff from a quote usually attributed to Isaac Newton. The quote actually had been around for some 500 years before Newton merely plagiarized it, he said. “If you do that in my class you will get a zero,” he said, with a laugh.

But he endorsed the concept of building on knowledge scholars had so painstakingly gained over the years. “Here at this university, you will be surrounded by faculty—smart people who know a lot. Giants, so to speak,” he said. “These are the type of giants you don’t need to be afraid of—they are the type of giants that you can climb on to see further.”

The result is “you will be taller,” Vélez pointed out. “So make sure to get your tuition money’s worth, and soak up the knowledge that the faculty have to give you.” 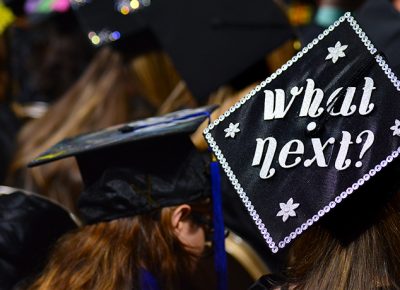 After receiving their diplomas in May, the newest alumni from Worcester State University stepped off the DCU Center stage to move on to the next one: life after graduation. And a few of them were off . . .