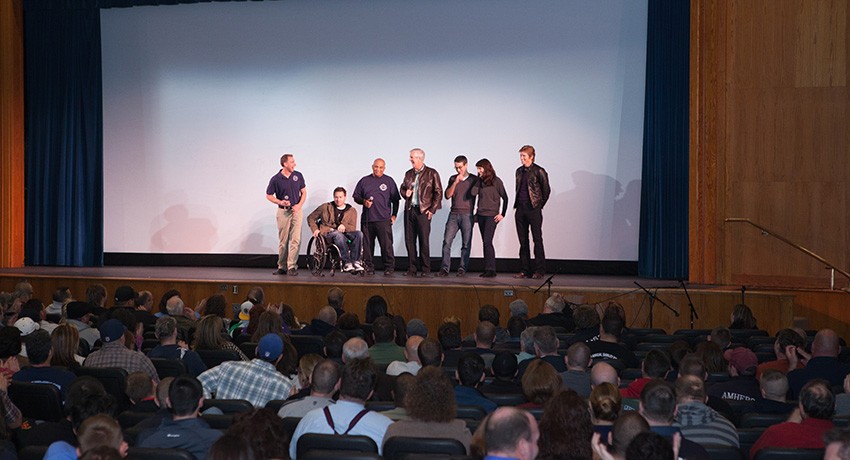 Worcester State University welcomed a packed house to a special fundraiser screening of the documentary “Burn” on November 15 in the Sullivan Auditorium. This special screening was a fundraiser to secure the national release of the film.

The film’s executive producer, Denis Leary, returned to his hometown for the screening, met with WSU students prior to the event, and joined directors (Tom Putnam and Brenna Sanchez) and firefighters from the film (Brendan Milewski, David Miller, and David Parnell) for questions with the audience following the screening.

Lenny Clarke, who appeared in the hit series “Rescue Me” with Leary, served as master of ceremonies for the event.

Leary, who grew up in Worcester, lost his cousin Jerry Lucey and close friend Tommy Spencer in the tragic Worcester Cold Storage Fire, which claimed the lives of six Worcester firefighters on December 3, 1999. The other four firefighters were Paul A. Brotherton, Joseph T. McGuirk, Timothy P. Jackson Sr., and James F. ‘Jay’ Lyons III. After the incident, Leary wanted to help the Worcester Fire Department recover and created The Leary Firefighters Foundation in 2000.

Leary told the crowd following the screening, that although the film focuses on the city of Detroit and its firefighters, it could be about any major city suffering with economic distress. “This is a cautionary tale,” he said. While Detroit faces more than 500 cases of arson a month with diminishing budget dollars for firefighters, Leary noted that many cities face the same issues. “Oftentimes, firefighter and emergency responder budgets are the first to be cut,” he said.

“This project was very eye-opening for me as a director,” said Putnam. “These Detroit firefighters are charged with the thankless task of saving a city that many have written off. Every shift, they face injury, disablement, illness, death. But still they come back, day after day, resolved they can make a difference. And they do it with camaraderie and a remarkable sense of humor.”

“’Burn’ isn’t just about Detroit firefighters,” explained Sanchez, “It’s about all national first responders, whose budgets are on the chopping block. It’s about the people you hope will make it to your house when there’s a fire.”

“Burn” won the Audience Award at the Tribeca Film Festival earlier this year. A significant portion of profits from the completed film will go to The Leary Firefighters Foundation to purchase new equipment for Detroit firefighters.

“It was wonderful to see so many firefighters and first responders in the audience,” said WSU President Barry Maloney. “We learned firsthand the importance of first responders earlier this week,” he said, referring to the massive water main break that closed the WSU campus and left the City of Worcester without water in mid-November. 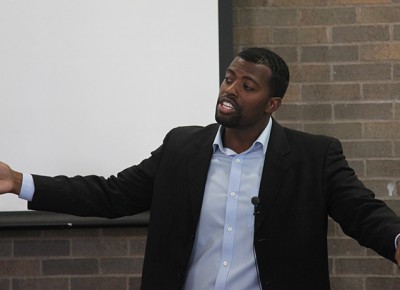 Rob Smith, who served in the U.S. Army for nearly five years as a tank driver and infantry rifleman, shared his story of being a “closeted” gay man in the military as part of Worcester State . . .