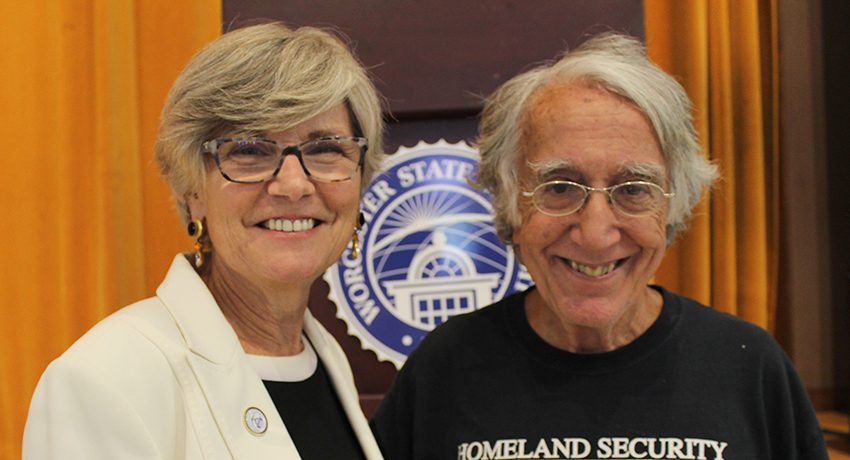 David Barsamian Warns Against Attacks on Truth, Facts, and Science

Legendary journalist David Barsamian kicked off the Worcester State University Provost’s Series on Democracy and Diplomacy with a call to political action and a plea for planetary cooperation on climate change. Additional speakers this semester will address topics ranging from media literacy to risk and resilience in military families.

Provost and Vice President for Academic Affairs Lois A. Wims, Ph.D., welcomed Barsamian as the inaugural speaker in a series of seven events planned for this fall, to a full house of students, faculty, and staff at the May Street Banquet Hall before Barsamian took the stage.

“This is a three-year initiative with an initial theme of democracy and diplomacy,” she said. “I think you can agree it is especially appropriate at this juncture in our national life and our national conversations. Through this series, we hope to offer an alternative vision for our society as an opportunity for people to get together to take practical steps toward realizing a vision.”

The Provost’s Series was initiated last spring by a group of faculty members, Wims said. The events are sponsored by the Provost’s Office and various academic departments. They will combine public lectures, conversations, and other activities to foster an atmosphere on campus, and beyond, that respects divergent ideas and encourages their productive exchange, that promotes human rights values, and supports meaningful inclusion of all members or society.

“Universities have a crucial role in the political and social debate,” she said. “At their best, they encourage nuance, complex, and incisive thinking amongst students, faculty, [and] staff about even the most challenging issues. We, as a public university, have a special trust to serve as a model for the broader public and to invite members of the public into a place where such thinking is the norm.”

The series connects with what students learn in the classroom, but also goes beyond that in many ways, said Associate Vice President of Academic Affairs Henry Theriault, Ph.D.

“It’s what makes Worcester State a special place that educates you and provides you with opportunities for intellectual and political growth in ways that are not always available to people in the general population—so it’s great that you’re here and I’m very excited to see the turnout,” he said, before introducing Barsamian, whose morning topic was “The New Political Resistance in the Age of Trump,” while his evening community lecture topic was “Media, Propaganda, and US Foreign Policy.”

In a wide-ranging kickoff talk, Barsamian, radio broadcaster, prolific author, and award-winning investigative journalist, focused largely on the ongoing struggle of humans against power, and Barsamian is decidedly on the side of the humans.

His topics included our nation’s ever-growing inequality of income; corporate control of the media; the demonization of minorities; what he sees as the Trumpian pull toward authoritarianism; the rise of far-right challenges to democracies around the world; and the attack on science and scientists, especially regarding climate change.

It was clear from the moment Barsamian took the stage that he is no fan of the current U.S. president, but he wasn’t interested in criticizing him directly. “I think it’s kind of like shooting fish in a barrel,” he said. “He’s a pretty obvious target, but I’m interested in the background and the context in which someone like this can emerge…Sixty-two million of our fellow citizens voted for Donald Trump so we have to understand what motivated them, what kind of economic, social, and cultural matrix could give rise to someone like Trump.”

He also encouraged the audience to resist what he and many others see as “an unmistakable drift toward authoritarianism, more and more concentration of power” among the already powerful. That budding authoritarianism has been accompanied by “an attack on the truth, an attack on facts, and attack on science,” he said. He called out “the falsification of history” and the “denial of climate change” as particularly troubling.

Barsamian co-founded a weekly radio program called “Alternative Radio,” now in its 32nd year, which is offered free to 300 radio stations and is funded entirely by donations. He has co-authored several books and has received several awards for his independent approach to the news, among them the Media Education Award and the ACLU’s Upton Sinclair Award for independent journalism.
Related issues and other topical subjects will be explored in events later this fall in the Provost Series. Here’s a list:

The plan is to follow the fall program with another in the spring, Theriault said. That series would combine some faculty-student initiatives to promote dialogue on campus and address related issues such as diversity and inclusion together with a major keynote address by a speaker in the later part of the spring semester. 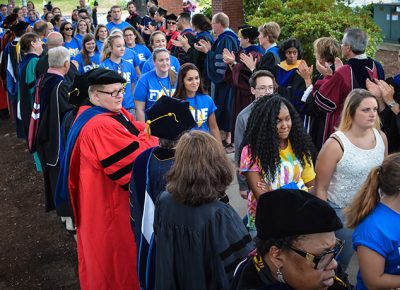