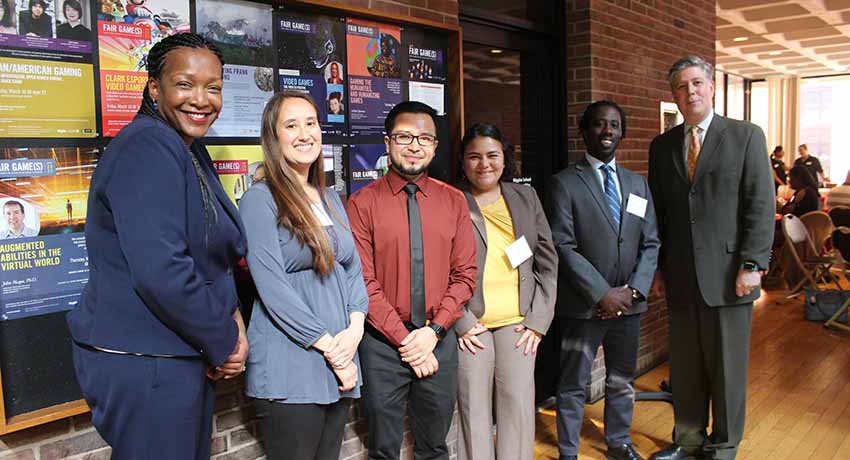 It has also added a unique professional development opportunity for University staff and faculty through a partnership with Clark University.

“The more people you have working in this space the more you realize that the space needs to grow,” Stacey Luster, assistant to the president for employment and equal opportunity, said. She was speaking at a recent ceremony at Clark honoring Worcester State employees who completed the program, as well as the most recent group from Clark to receive their certificates.

The program is taught by skilled professionals from the greater Worcester community. Participants in the Diversity and Inclusion Certificate Program take nine sessions (five core sessions and four electives) from a slate of courses over 18-months or can choose to accelerate their learning in two consecutive semesters. Each session is two to three hours and culminates in a capstone project. Topics include social construction of race and class, implicit bias, and building an inclusive team, among many others. The University currently is recruiting the next cohort for the professional development program. 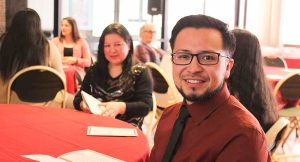 Eriberto Mora-Carrera at the event

Program participant Eriberto Mora-Carrera, assistant director of Multicultural Affairs, was asked to speak at the ceremony because his capstone project has been exceptionally successful. He organized the University’s inaugural Brotherhood Conference in March, which drew 100 first-generation, economically diverse, ALANA/BIPOC students from across the state universities and local public schools.

“A lot has been addressed over the past couple years – from socialization to implicit racial biases to power, privilege, and oppression,” Mora-Carrera said. “There have been deep and meaningful discussions about microaggressions in the workplace and the intersectionality of our identities. Participating in these sessions has made me more self-aware and allowed me to be vulnerable. They have helped me understand many different topics and how to grapple with them.”

The program offered a welcoming space to discuss sensitive issues, said Christi Berry, who graduated from Worcester State in 2019 with a degree in Urban Studies before enrolling in a master’s program at Clark. “If you made a mistake with something like pronouns, people were very willing to talk with you about it,” she said. “It was a very safe and empathetic place to have a discussion and talk things through.”

Alison Okuda, Ph.D., assistant professor of history and political science, said she thinks everyone at Worcester State would benefit from going through the program. “It reinforces ideas you may have had an introduction to, but it gives them more depth,” she said. “It’s a way for people to increase their cultural competency to make Worcester State a more welcoming place.” 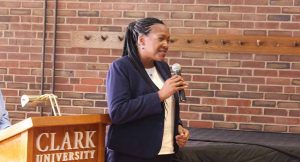 Stacey Luster speaking at the ceremony

WSU President Barry M. Maloney thanked Clark for including Worcester State in the program, which Clark started five years ago, and said the knowledge participants gain will help students meet their educational goals.

“All of us are engaged professionals on the pathway to make sure that students – when they enter into Clark University or Worcester State – see a pathway for success for themselves,” Maloney said. “It’s our job to help them expand in ways that allow them to become great citizens of our country, our state, and our city.”

If you are interested in joining the next Diversity and Inclusion Certificate Program cohort, please contact Stacey Luster at sluster@worcester.edu or Maria Gariepy at mgariepy1@worcester.edu and include your statement of interest by Friday, June 3, 2022.

NoMad, a concept for a mobile application that quickly matches users with new dining experiences based upon their preferences, won the 2022 Robert K. O’Brien ’58 Next Big Idea Contest on April 20. Jonah Messier, who is scheduled to graduate in December, pitched the venture to the panel of three judges emphasizing that NoMad makes it easy for users to decide what to do when heading out for the . . .