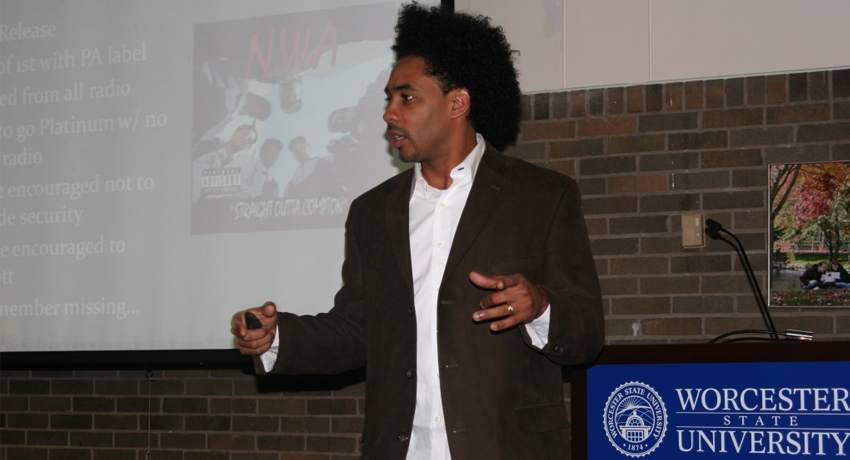 Domingo Guyton Reflects on Notoriety of the N-Word

“Do I have your permission to use this word?” asked Worcester State University Adjunct Professor Domingo Guyton before beginning his lecture. “I want to make sure that you all are comfortable, because I want us to have an honest discussion about this topic.”

The audience nodded their heads, with a few members confirming their agreement with a soft “yes.”

“In no way am I an expert on this or trying to sway your mind,” said Guyton as he proceeded, “but here are some things that I found out about what we’re dealing with.”

It may seem strange for a speaker to ask their audience’s permission to use a certain word, but when it comes to something as contentious as “nigger,” a slur used against black Americans that has plagued this country’s politics, society, and culture for centuries, delicacy and tact are needed – if not required.

Guyton, an adjunct sociology and health professor, as well as an alumnus of Worcester State University, explained that until 11 years ago, he embraced the n-word, especially when he was a younger man and aspiring rapper growing up in the rough Boston neighborhoods of Dorchester and Mattapan.  However, his stance on the word has since changed.

“‘Nigger’ is a violent word,” he said, adding that since its inception, ‘nigger’ has always been a term used to dehumanize and demean black people. After the end of slavery, Guyton explained, blacks began to internalize the word as a result of the prejudice that they experienced.  “It was part of their pain,” he said.

While America tried to move away from slavery and segregation, and the black American population slowly gained a more rightful place in society, racism and the negative stereotypes of blacks continued to be promoted in popular culture, he said. Such examples include Mark Twain’s novel Huckleberry Finn (which uses “nigger” 215 times), D.W. Griffith’s positive portrayal of the Ku Klux Klan in his film The Birth of a Nation, and the “blackface” that was popular in the Vaudeville acts and early films.

“It is important to remember that the popular use of the n-word did not begin with rap in the ’80s and ’90s,” Guyton said. “Our culture has been doing this for a long time.”

Turning his focus to the music industry, Guyton argued that casual use of the n-word began in the late ’80s and ’90s with the advent of TV shows such as Yo! MTV Raps and rappers and rap groups like Tupac and N.W.A. Record companies began investing in artists and groups who used a ‘thug’ or ‘gangsta’ image, as well as explicit lyrics that promoted gun violence, drugs, money, and, often, degraded women.

From there, “nigger” transformed into the more familiar “nigga,” a term that some rappers claimed was in a different category than the original term and used as a form of endearment or familiarity. Yet Guyton, a rapper himself as well as a professional drummer and music producer, disagrees.

“When it comes down to it, there is no difference between “nigger” and “nigga.” It is the same word,” he said. “It’s used to make money, and it’s unhealthy in black culture.”

At the end of the lecture, when he was asked how to combat the use of the n-word, Guyton answered that the best solution is education, not censorship.

“It’s not about banning the word. It’s about awareness, discussing the history of the word, and education. That’s our best strategy.”

'The Yellow Dress' Shows the Harsh Reality of Domestic Violence

“I know that I did the right thing to leave him; it’s just that I didn’t know that Rick doesn’t take ‘no’ for an answer.” So says the tragic main character Anna in "The Yellow . . .