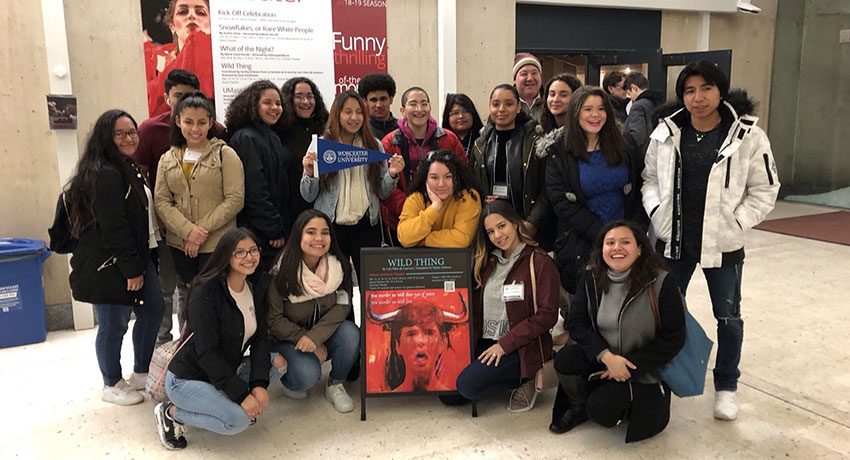 The students were part of the university’s duel-enrollment program, which offers college-level courses to Worcester public high school students, giving them an opportunity to sharpen academic skills and to experience college life.

The Amherst production of “Wild Thing” is the first one ever in English, and features Gila, one of the great protagonists of Spanish Golden Age Theater. Long forgotten, the play has been rediscovered in recent years and shows a character who is gender nonconforming.

Thanks to the efforts of LEI, students met with the UMass campus group “Latinos Unidos,” and had a formal dinner before the performance. Harley Erdman, the translator of the play, and several members of the cast hosted a talk afterwards, where students were able to interact with the actors, ask questions and take pictures with them.

This trip was part of Guijarro-Donadiós’s course “Spanish Reader’s Theater and Performance” that gives students the opportunity to approach Spanish dramatic literature through a creative and experiential learning process. The purpose is to enrich the oral, reading, comprehension and literary development skills of the Spanish language through theater. They analyze plays to have a better understanding about today’s issues such as immigration, identity, #metoo movement, bullying, environment, and social media. All the plays studied deal with these topics from very different perspectives and historical eras.

After watching the live performance, students commented on what they had learned. Ana-Sofia Sarmiento observed that she better understood the symbolism and subtleties of the written text than when she and her classmates had analyzed the play in the more traditional academic setting. “We were dealing with not only a different vocabulary, but also a different world,” she said.

Ryan Renteria said that the action of the play, including when the actors created an unscripted moment, helped bring the centuries-old play to life.

Nizaris Cruz observed how the play was performed much as it had been in the 17th century, with minimal scenery and each scene was described by the text itself, with barely any special effects.

The trip has also reaffirmed the strong interest among students in Worcester State’s own Bilingual Theater Troupe, Teatrillo de Oro, which will continue performances in the upcoming fall semester, according to Guijarro-Donadiós. 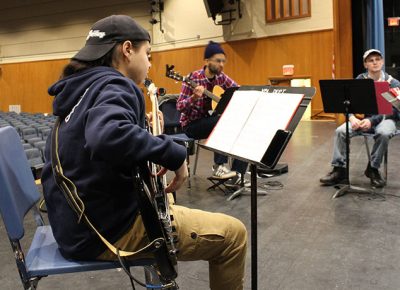 Music at Worcester State University is adding new sound to its repertoire. Música! is Worcester State’s first Latin American ensemble and it is directed by Carlos Odria, Ph.D., an adjunct faculty . . .