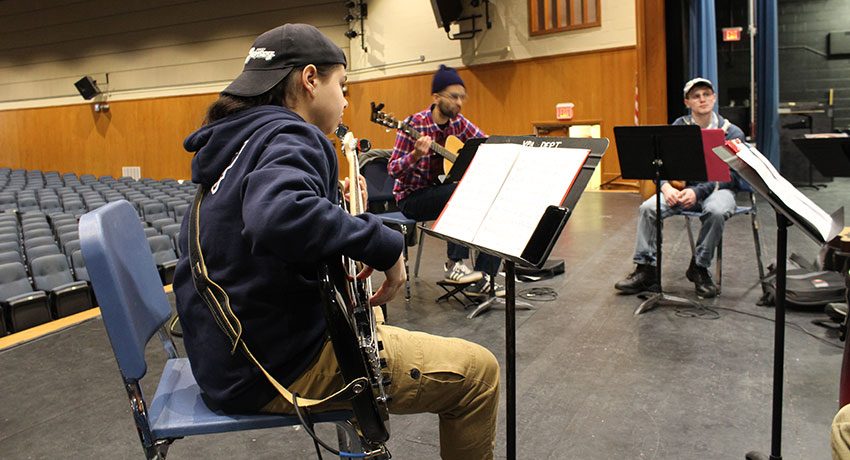 Music at Worcester State University is adding new sound to its repertoire. Música! is Worcester State’s first Latin American ensemble and it is directed by Carlos Odria, Ph.D., an adjunct faculty member at WSU. Though this is only Música!’s first semester, the ensemble is already working to diversify WSU’s music and engage members of the community.

The group’s first performance will be from noon to 1 p.m. April 26 at Starbucks in the WSU Student Center.  A second show is being planned for noon to 1 p.m. May 3 in Sheehan Hall. Odria and the Música! group are working with the Third World Alliance and the WSU Spanish Club to pull together a festival that day with Hispanic food and other activities.

Música! has already received an invitation to perform at this September’s StART on the Street festival, a major arts event in Worcester that attracts tens of thousands of people.

While at Florida State University, Odria spent five years directing a Latin American ensemble. Since coming to WSU, he suggested to Professor Kyle Martin of the Visual and Performing Arts Department the idea of a new ensemble.

“I initially said let’s do a South American ensemble, which is already a huge thing considering all the countries there,” Odria explains, “but then we extended it to be a Latin American ensemble to cover the Caribbean and Central America because we wanted to reach different types of student populations at Worcester State and also members of the community.”

Música! is currently working on three completely different styles: choro from Brazil, huayno from Peru and Bolivia, and bolero from Mexico. “We can take different styles from the entire Latin American region,” Odria says. “I tried to start with something very diverse, going along with the idea of diversity.”

Martin agrees about diversity, saying, “So much of typical music programs is the European, Western civilizations and there’s been a big shift in that.”

The ensemble’s previous unfamiliarity with the styles has made learning the different nuances a bit tricky, Odria explains, whether for percussion, strings, or even vocals.

“We have a great singer from the VPA Department,” Odria says, referring to Ian Simpson, ‘19.  “He’s a very good singer, but he is now learning Spanish to be able to sing it correctly. So there are different levels in which students need to engage in the learning process to put together the ensemble.”

Odria is not just concerned with students learning the notes; he also wants members of the ensemble to learn about the cultures from which the the music developed.

“Being in this ensemble for me, my idea is to have a space for students, not only to learn music but to learn about different aspects of Latin American culture which is very rich and diverse,” he says, “It’s not a homogenous culture. Through playing the music and learning different styles, hopefully students who are not familiar with Latin America can see that diversity, the rich culture that these many cultures can offer.”

While ensemble members have much to learn and grow familiar with, there is still a focus on the enjoyment of the process. “We want to get to a level in which students can feel comfortable in the music and they can do it with close attention to the different styles, but also we want to make it fun and we want to make it creative, so I try to have a balance,” Odria says. “I don’t want students to only play what’s in the recording or in a rigid way; we want to make it fun.”

“The VPA Department has been working diligently in creating a series of performances in public areas of campus, which I think is great for not only for listeners, students, but for students who learn a lot by performing for others,” Odria says. “So in those spaces we also want to include Música! so students can have fun playing for others in a laid back, welcoming community environment.”

“We’re hoping it excites people and appeals to the community at large,” Martin agrees. “It’s fun.”

“It’s also a great way of building more on the current effort to expand the reach of the university to different populations in the community and the student population, something that’s really important right now,” Odria says. “Through music it’s possible to reach many different audiences in a very friendly, but also educational way. It’s not only about music because we really want to educate people and have students have a good learning experience.”

“It’s open to everyone,” Odria says. “Our idea is to congregate people and we’re open to any kind of instrumentation. It’s people who are willing to participate and have fun it’s not supposed to be a stressful class. It’s mostly about having fun.”

About the future of the ensemble, Odria hopes Música! will be able to expand in both members and range of instruments as well as become an institution on campus. “There are endless possibilities,” he says.

There are many opportunities for students to get involved with music on campus. Students can pursue their interests as well as be introduced to new genres of music they may not be familiar with. 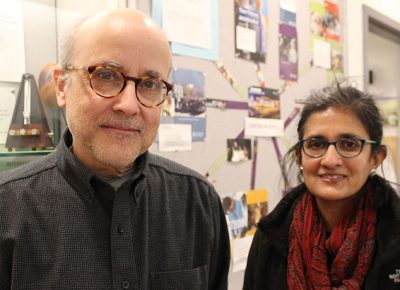 Associate Professor Francisco “Frank” Lamelas, Ph.D., and Professor Sudha Swaminathan, Ph.D., of the Earth, Environment, and Physics Department, have demonstrated in a laboratory how to pinpoint . . .