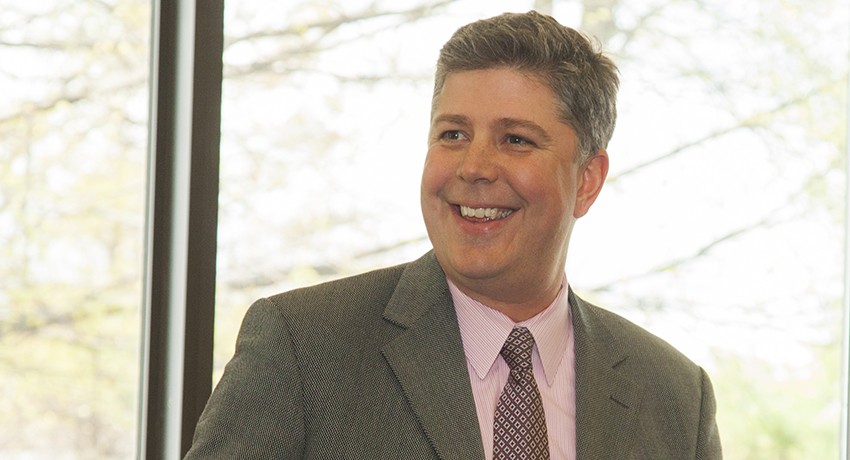 One year after announcing his Five Points of Action Toward a More Inclusive Campus Climate, Worcester State University President Barry Maloney devoted some of his mid-year employee meeting to providing a progress report.

The large group assembled in Fuller Theater heard from Stacey Luster, assistant vice president for human resources, payroll and affirmative action/equal opportunity, and Isaac Tesfay, director of diversity, inclusion, and affirmative action/equal opportunity, who offered data and examples of the progress made to date on each of the five points. Their presentation, Luster said, covers the campus-wide effort, not just their own department’s work.

Luster explained that the campus was working on these issues and had a strategy that “is incorporated into our existing strategic plan, which allows it to be institutionalized and, I believe, sustainable.

“Diversity, as we know, is the first goal in this process. We feel very pleased with the results that we have achieved this year: Approximately 30 percent of all of our hires for this year are Asian, black, or Hispanic,” she said. “And that doesn’t just happen. We actively recruit it, and we have a strategy that makes Worcester State University feel welcoming to all.”

In addition to “Diversity in Hiring,” progress has been made on each of the other four “Action Points:” Cultural Competency Training, Cross-Racial Interaction, Contextualizing Classrooms, and Student Engagement. Luster indicated that nine major areas of the staff have received cultural competency training, including: new employees, all supervisors, and University Police.

A campus-wide commitment to cross-racial interactions and contextualizing classrooms, which have gone hand-in-hand, has been evidenced by offerings from the Center for Teaching and Learning, the Latino Education Institute, and from the offices of Multicultural Affairs and Diversity and Inclusion. In addition to launching the interdisciplinary Ethnic Studies concentration, which had more than 50 students enrolled this academic year, the campus has benefited from numerous talks and workshops led by experts such as Laura Rendón.

Tesfay spoke about the New England Resource Center for Higher Education’s assessment of the campus climate, and the student engagement pieces that are taking place as a result of the initial assessment. Underway are University Police discussions with students, work-plan development, and student focus groups and surveys.

The national news about the status of those who come from other countries was on the minds of many who attended the meeting. In response to a question, President Maloney said that students’ safety “is first and foremost in our minds.”

“Right now, as all [Massachusetts] state university presidents have pledged, we will not participate in the deportation of any of our students. I will not take part in that, and I will not ask any of you to take part in that either. I pledge that to you all today,” he said. “In terms of creating a sanctuary campus at this university, I am not ready to make that decision right now, because that topic and that term may have negative repercussions for public institutions. I want to be mindful of what may happen.”

President Maloney had opened the meeting with a thank you to Raynold Lewis, Ph.D., who had served as interim dean of the School of Humanities and Social Sciences, and asked for a moment of silence in honor of the passing of Jane Friederichs, Ph.D., who had served the campus in that role for more than a year before Dr. Lewis. Maloney also welcomed the school’s new dean, Russ Pottle, Ph.D.

President Maloney also provided campus updates on enrollment numbers and Governor Charlie Baker’s just-released state budget proposal calling for, essentially, level funding over the current year’s appropriation. “Certainly we are going to comb through our budget and our needs, but this year will mean a lean budget season for Worcester State and for all public higher education,” he said.

He also outlined a package of legislation that the state universities would be filing this legislative session. Six of those bills would fund our collective bargaining agreements; allow families to file for a tax benefit for their college costs; fund an endowment match for university foundations as well as provide a state tax credit for donations; increase the ceiling amount that would trigger state oversight on construction and renovations to afford us more local control; and allow state universities to offer clinical doctorates.

Two bills are related the current issues in the national political sphere. The first is aimed at protecting students’ personal data from the public. Maloney said it is intended to rein in companies that use public records laws to obtain university student databases that they then sell to other companies, and would protect students from those who may target them based on their surnames or other identifying characteristics.

The second bill, the tuition equity bill, would codify our current admissions practices for Deferred Action for Childhood Arrivals, which was a federal initiative that took effect several years ago. University advocacy organizations have indicated that new administration is likely to overturn it. Massachusetts is one of 19 states that adopted the DACA program, and for several years, the state’s universities have categorized all students who attended Massachusetts high schools as in-state students.

“DACA students are not eligible for federal or state financial aid,” Maloney said, “but their status as an in-state student is still very meaningful for them as they work toward earning their degrees. This bill would ensure that that practice continues.” 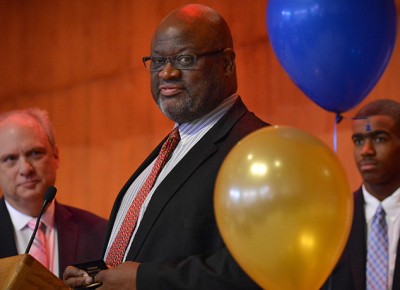 The 23rd Annual Martin Luther King, Jr. Youth Breakfast elicited a roller coaster of emotions from the attendees of the ceremony. In one minute, the audience was silently wiping away their tears . . .