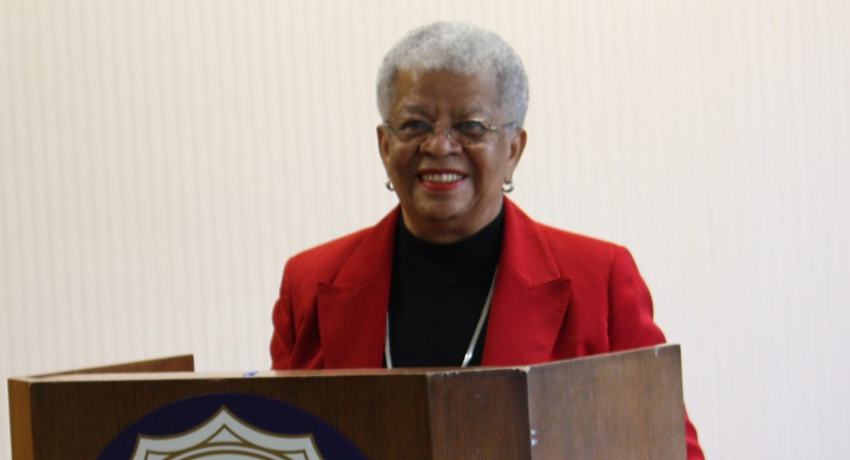 I’ve never been to an open-mic poetry reading. Suffice to say, the winners of the annual Dr. A. Barbara Pilon Poetry Contest deserved the honor.

That’s what many of the brave poets there uttered before taking the podium in the President’s Dining Room (Student Center) on Thursday, November 1. And the crowd wasn’t limited to students or alumni – I spotted administrative clerks, professors, even parents in the audience. Their reading styles were as diverse as their ages and backgrounds.

When I entered the room, there was a woman in the midst of a reading, in a voice barely above a whisper. The room was packed. With no empty seats, my photographer and I quietly camouflaged ourselves by the back wall. Once the three winners of the scholarship were announced, it was an open floor.

The works read were emotion meeting diction, philosophy meeting passion. One poem posed the question, “Is it okay to fight fire with fire?” Another told the short story of a young man transforming into an elephant, giving new meaning to the phrase “elephant in the room.” By the end, the readers had touched on everything from urban violence and poverty to social anxiety and acceptance.

I paid close attention to each participant’s cadence and flow. It was easy to get drawn in. There were freeform and rhyming poems laced with colorful language, layered metaphors, and intellectual humor. I confirmed that the majority of attendants were repeat consumers of these events.

Afterward, Jonathan Blake, an adjunct English professor, read a few works himself – some he wrote, some by other poets that he simply enjoyed. He thanked the winners for their contributions, encouraging their writing pursuits.

Use the Back Door

Leaning against the tall
Dark buildings
No other sign of people

It is another night in Haiti
Stars are wrapped in darkness

Back bent over
Like her black scuffed shoes
Walks alone

Those decadent trails, those lush shuttle tails
of orange bursting yellow yelling “now!”
have a purpose: the vines, having to reigns
to hold in their quest to find what it is they
don’t know, use the heaviness to prop them

Down. Up in the terra cotta banks,
it doesn’t matter that all the winter jars
are broken because Isabella Stewart’s
gardener is a diligent man. He changes the soil
once a week so the flowers may hang

Low. High hopes, he has, that some season
they’ll reach the bottom and disprove eternity;
that they’ll discover an artifact in the courtyard
strong enough to support them while they pry
themselves from the gutter of his window.

Jimmy and the boys ran, after the race,
into the lull before the parade to see if
Rita and the girls were up for some chase.

Out of two-thousand, Jim took thirty-first place,
Bill ninetieth, and Owen three-hundred fifth.
Jimmy and his boys ran in, after the race.

None of them remembered sunscreen! Owen’s face
was the worst, and Jimmy tried scrubbing it with spit.
Rita and the girls warmed up to the chase.

Jean and Marie yanked their sweaters on, in case
of a draft. They wrung gasps as Rita’s sides split:
Jimmy was letting the boys recount an uphill race.

Owen spilled his green beer all over the place,
and while the boys were bumbling to clean, swift
Rita, with her girls, took off to retrace the race.

By the time the boys noticed, there was too much space
between. The girls’ knees fluttered with such lift…
Rita and the girls were up for some chase
Jimmy and the boys ran after their race.

is slanted. It lies like a sled in an overgrown
valley. They’re all like that: I’ve never
known a street named Pleasant that has ever
made me feel nice (just like I’ve never known

a girl named Prudence I haven’t f****ed.) They bite
at expectations like dogs bite at fences,
but in the shadows, they’re really quite defenseless;
in their chain-link hand-me-downs, they seem quite

unlikely. Triple-deckers (thrice bedecked!)
hunch into fronted stoops—in backyards, bird
baths lie buried in brush (not that there were
any birds.) Chained dogs bark, from out of the dark,

at gangs (packs of neighborhood brats,” who fly
from the rails of upper stories onto mountains
of dumpster mattresses, who stop cigarettes out in
brush-lined passages, who vandalize street signs.)

the Big Bang was a gunshot blood splatter gold on black

Not for all the free form jazz in the world would I trade comics with Bill Cosby’s skeleton in this part of town. Acid eaters just looking for a place to digest and he’s rattling his bones on the hardwoods. Dizzy Gillespie’s cheeks took a vacation and they’re floating over Detroit dropping salamanders. Fifteen quarter notes and a handful of nickels for some powdered sugar and a sticky finger, asking around for the time wearing eight watches under town-hall and a clear night sky, turning sweaters to swamps, growing mold and greenhouse gasses in your asses without a hint of sit-com laugh-track “it-doesn’t-seem-safe-but-we’re-in-a-controlled-environment” sort of reassurance. Take it from me, salty as can be: 1 A.M. means the recession’s over.

I am a pen, dipped in a salty inkwell, scratching out the round dance of human honeybees on the beach, drawing a map to my peers for locating vodka (and other treasure), To be printed in the fifth edition of The Universe, the only difference from the previous edition being updated illustrations and sundry letters of complaint to the Editor.

Night shows up
And she’s hungry.
And I’m bored.
So we compromise:

I waste gas.
We kill time.
I drain whiskey.
We wither together.

But she’s so hungry
And anyway,
She’ll be hungry again
Tomorrow night.

I think I love her
But she’s unfaithful,
Spending this quiet time
With a thousand other me’s.

And she’s indefatigable
As 3 a.m. arrives
And my booze, my gas, and I
Are exhausted

I sit in my driveway, thinking about our time together.
“The road is a place for poetry” I say to her.
“Each streetlight marks a page in the lexicon of life.”
“If I remembered half of the things I thought to-night I could be happy.”

She smiles,
“If men remembered what they said to-me, there would be no poetry.”

I felt my heartbeat growing rapid
When I saw a tear
Falling from your aging eye.
The room was still.

My answer was a tear returned,
And shaking knees
Between each shallow breath.
The room was bright.

Falling backwards, my head hit concrete.
You did not lift a finger,
Because you were incapable.
The room was dead.

A Sonnet for Hands

I cannot recall my grandfather’s face
I remember his hands, pale and slender,
Giving cold comfort with every embrace,
Five times, they greeted newborns with splendor.
My hands are scarred from mishaps with fishhooks,
But soothe when wiping away children’s tears.
They have turned the pages of many books,
Shook when they carried the burden of fear.
Their nerves often fail and drop what I hold,
But pressing piano keys they stay calm.
Their fingers are short and sometimes grow cold,
The lifelines are barely seen on the palm.
Years ago, they broke bread every Sunday,
Wished peace upon others, then hid away.

She would sit at the mahogany table,
Complaining that the meal was no good.
Because although it was spaghetti,
It was not the same as Gram’s.

She whined to her father about going to church,
Made a fuss every single Sunday,
Said it wasn’t fair to make her worship
Something she no longer believed in.

She never wanted her aunt to cut her hair
Because every time, it came out crooked.
And she didn’t want to have bangs anymore,
Even though her mother insisted.

She begged God for forgiveness one day
For all the years of petty protest.
Then screamed at him with a violent pain
For taking them all away. 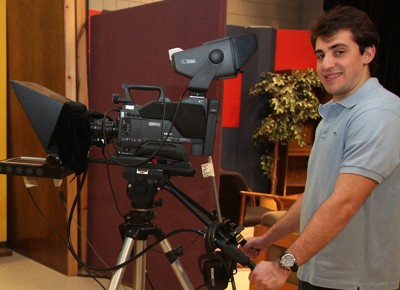 “It was hectic. It gave new meaning to the word ‘brainstorm.’” Such is the life of an intern at Worcester State University’s Communication Department. In this case, I was speaking to Ronald . . .