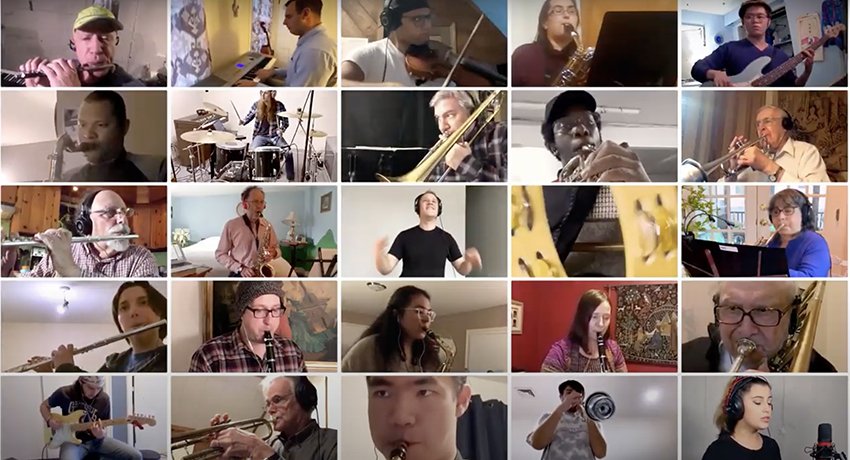 Ensemble Creates Music, Together from Afar, With Innovative Technology

The jazz video—and additional ensemble videos being planned—are achieved through innovative use of “selfie” filming, creative editing, and audio tracks that participating musicians listened to while playing their respective instruments.

For Visual and Performing Arts Music Adjunct Professor Jeremy Cohen and the 24 ensemble members who participated in last semester’s project, the four-minute production symbolizes a much bigger journey, one that included great challenges and rewards.

“You can’t really replace the experience of being in the same place as other people playing music together in real time,” says Cohen, the 2019-2020 recipient of Worcester State’s annual Adjunct Excellence in Teaching Award. “Personally, I think it’s one of the most special things that humans do.”

Cohen adds that building Jazz Ensemble into the robust group that exists today had been a passionate process that took years of development. “Having all of that progress potentially wiped out by the pandemic was something we were determined to avoid,” he says.

So, in March 2020, as the university began its first pivot to remote learning, Cohen and fellow members of the music faculty began searching for solutions for ensembles with the support of VPA Chair Adam Zahler and Applied Music Coordinator Kyle Martin. He learned about funding available for projects aimed at enhancing student experiences during the pandemic. VPA Music Professor Carlos Odria, an acclaimed guitarist who has extensive recording experience with his Boston Music Award-nominated band, The Carlos Odria Trio, was also an instrumental resource.

The support and collaboration includes audio production by Wondersmith Audio of Boston and video production by Emigre Pictures of Roslindale, and ultimately enabled Worcester State’s ensemble musicians to make music together again despite being in different physical locations.

“When we set out to take on this project—something we’ve never done before—we felt inspired and encouraged by the work of Eric Whitacre, a Grammy-award winning vocal composer who began producing virtual choirs in 2010 and has grown them over the years to feature thousands of singers together on an international scale,” says Nigro. “I’m proud of the commitment of our exceptional singers in producing our own innovative piece. We’re thrilled to perform together again, and we’re looking forward to sharing their voices with audiences at Worcester State and abroad.”

Additional production support is expected in the Spring 2021 semester for groups including Worcester State’s African Drumming ensemble and others.

“Given how isolated we’ve had to be and how much we’ve lost, you can still get a lot from these alternative formats,” Cohen says. “Even the planning meetings over Zoom were really therapeutic for people.”

In the case of the Jazz Ensemble, nearly all of last year’s participants returned to participate in the Fall 2020 virtual ensemble, a group comprised of current Worcester State students, alumni and Worcester State faculty, including VPA Music Professors Jon Clark and Steve Gagliastro, French Professor Judith Jeon-Chapman, Ph.D., and Worcester State community members including former Worcester State Professor Glenn D’Alessio, and Les Saffer, a French horn player who studied with the father of Humanities and Social Sciences Dean Russ Pottle, Ralph Pottle, an acclaimed French horn player who served as a member of the Boston Symphony and Boston Pops orchestras.

Cohen adds that while the project offered daunting, uncharted territory for the ensemble—with every musician being asked to submit at least one selfie video revision—a common passion, resilience, and persistence seemed to emerge from the group.

“Many of the most touching reactions from ensemble members were about more than even making music,” says Cohen. “So many people told me that just working toward a common goal and seeing this project through to the end helped provide focus during a stressful time.” 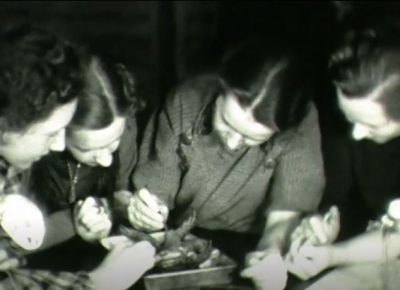