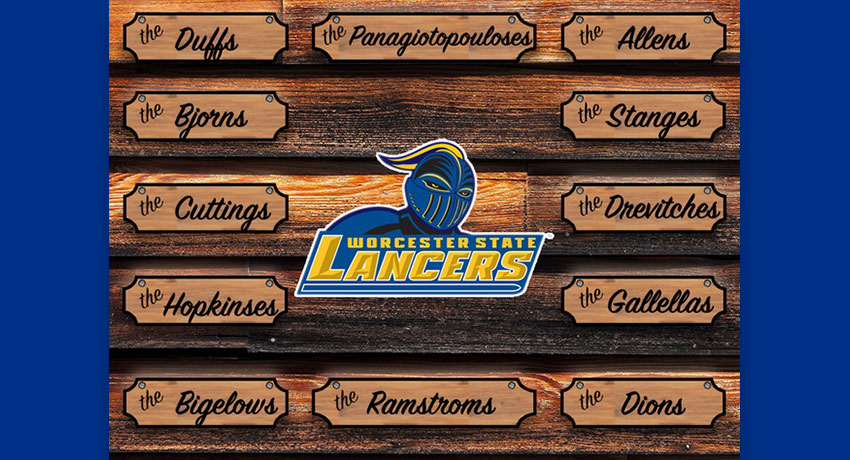 Looking down the rosters of Worcester State University athletic teams, you’ll notice a lot of patterns. Business administration, criminal justice, and education majors litter each of the 20 rosters. Central Massachusetts makes up the bulk of the hometown column, with Worcester, Shrewsbury, and Auburn topping the list. Nearly every team has at least one Wachusett Regional High School graduate.

As a public state university, these are not surprising or unorthodox observations. If you look a little closer, however, you might notice duplicates of quite a few last names. That’s no coincidence either. Worcester State’s rosters are home to 12 sets of siblings.

Twenty-five of Worcester State’s 384 student-athletes—seven percent—have siblings that either play on the same team or on other Lancer teams.

Baseball (Cooper and Parker Bigelow and Sam and Seth Allen), field hockey (Carly and Sarah Duff, and Jess and Rachel Hopkins), and men’s ice hockey (Tim and Kevin Drevitch, and Deiter and Gunther Stange) all lead the way with two sets of siblings on their teams.

In addition to two sets of siblings on the field hockey roster, three more members of the reigning Little East champions have siblings that play other sports for the Lancers. Freshman Molly Cutting’s older sister, Colleen, is on the women’s basketball team, defender Sarah Bjorn is sister to Erik of the men’s basketball team, and Lexie Panagiotopoulos is the twin sister of Sammy of the football team.

Brothers Tyler and Sam Dion, both of the men’s basketball team, and Gus and Tim Ramstrom of the football team, are the final two sets of siblings on Worcester State athletic rosters. Tim was on the football roster in 2018, but served as a manager in 2019 due to injury. He plans to return to the lineup in 2020.

Colleen and Molly, the youngest of four Cutting siblings, recognized the bond their two older sisters shared when they both attended the University of Connecticut together.

“When I started to talk with (field hockey coach Alexa Carlson) and things became real, I reached out (to Colleen) to see if she would have any problem with me going to the same school as her,” says Molly. “She was confused as to why I was even asking.”

“Once I fell in love with Worcester State, I definitely wanted Molly to come here too, but didn’t do too much persuading because I wanted her to be able to make her decision,” says Colleen. “I’m really happy she chose Worcester State because I love getting the chance to go school with my little sister again.”

“My basketball coaches, and my dad especially, wanted Elizabeth and me to be a package deal wherever we went, but we weren’t so sure right away if we wanted to go to school together,” says Erin Gallella, the older of the twins by a whopping minute. “At first, we both thought it’d be better to separate for the first time in our lives, but we did go on all recruit visits together. Worcester State ended up making us a package deal because we both loved the school, and we’re both very happy with our decision of going to school with our older sister, Karalyn.”

Field hockey senior Sarah Bjorn has the distinction of being the only older sibling to enter Worcester State after her younger sibling was already there. Sarah transferred into Worcester from Franklin Pierce University for her senior year, while Erik, a junior, just completed his third season on the men’s basketball team.

“Having my brother, Erik, playing basketball for the same college has been very special,” says Sarah. “I think playing sports in college has brought (us) much closer. We appreciate each other’s goals and accomplishments made during the season in person rather than by phone or internet. Having both of us at the same college competing in athletics certainly gave us the benefits of providing sibling support, attending the games, and extending continuous encouragement and praise.”

“It’s been a fun element of our athletic department this year to have so many relatives competing for Worcester State together,” says Director of Athletics Michael Mudd. “We have always had a handful of siblings over the years, but it seems to have really peaked this year with a number of new incoming freshmen and transfers. It is a testament to our campus and athletic communities that so many families have chosen to make Worcester State home to not only one of their children, but two or even three.”

“Going to the same college with my siblings makes me feel more at home,” says Erin Gallella. “Getting to play on the same team as them makes it an even better experience.” 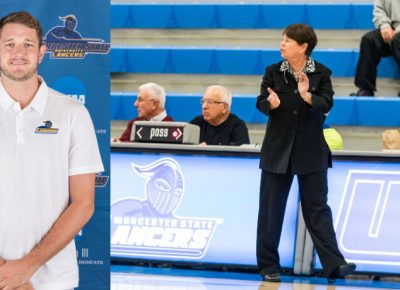 Both Basketball Coaches Garner Coach of the Year Honors