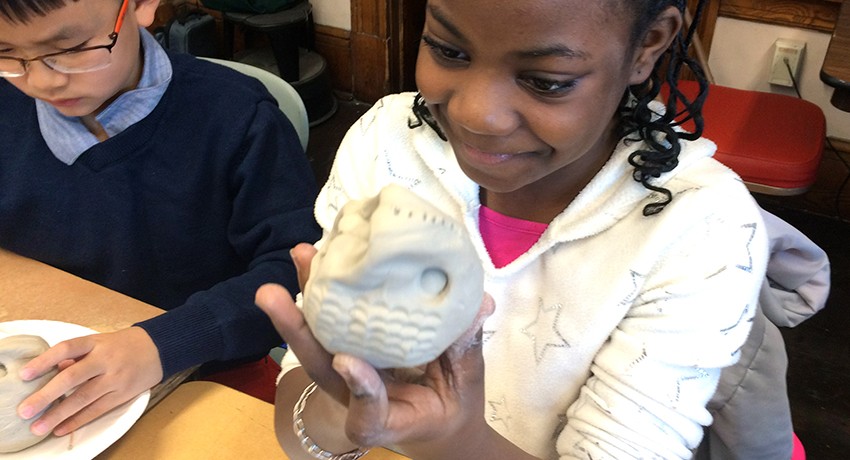 Learning through art is not a new concept. All of us have colored in sheets of math problems, created maps, or drawn pictures depicting a moment in history. Art creates an opportunity to enhance learning.

Through a STARS grant from the Massachusetts Cultural Council, Adjunct Professor Susan Fisher (Visual and Performing Arts) took the intersection of art and learning to a new level. For the third year in a row, Fisher worked with the Columbus Park Preparatory Academy in Worcester to assist teachers in absorbing art lessons into the school’s curriculum.

The Massachusetts Cultural Council’s STARS (Students and Teachers Working with Artists, Scientists and Scholars) Residencies are part of the MCC’s Creative Youth Initiative, which seeks out creative learning opportunities for students in and out of school.

The MCC awards STARS grants in amounts up to $5,000 and the programs start right after Thanksgiving. For this year’s grant, which was about including art in the standard grammar school curriculum, Fisher worked on a unit of Native American pottery. Students created their own pottery and then wrote about it.

Brianna Howe, a 2015 graduate of Worcester State’s VPA program, assisted Fisher on the project. Howe has worked with Fisher on all three STARS grants. “She is an asset to this program on every level,” Fisher said.

In addition to Howe’s assistance, Fisher worked with classroom teachers in implementing the program. She also will collaborate with Columbus Park’s art teacher to put on an art show of the students’ work at the end of the year.

“The art show reinforces the concepts that we each teach in our programs,” she said.

Fisher targeted Columbus Park in Worcester for two specific reasons. Columbus Park is a low-income school where enrichment programs play a role in enhancing the curriculum, and Fisher knows the principal, Siobhan Dennis, who was one of Fisher’s former students. The two have collaborated on the STARS grants for all three years.

Fisher hoped the Columbus Park students learned to express their ideas visually and see how their prose and art affect each other. She also hoped students saw how learning happens across academic disciplines and how that enhances the learning process.

“This project promotes self-expression and creative thinking,” she said. “It also encourages students to think about the indigenous people of the United States.”

Written by Paul Fontaine, a marketing and public relations intern in the VPA Department

The Worcester State University English Department was well-represented at the 2016 New England Popular Culture Conference at Keene State College in New Hampshire in October. Their scholarly . . .