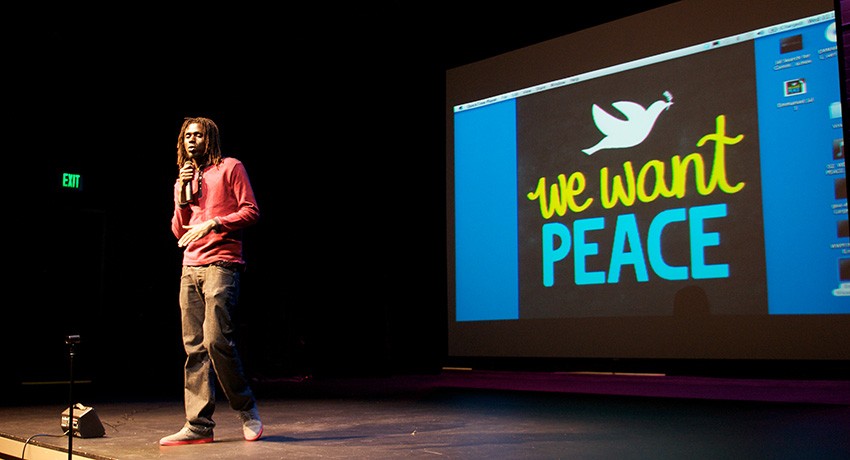 As backdrop, images of Jal as a child soldier, along with words from his songs, were projected on a screen for the audience to see and his music filled the theater. He also highlighted integral figures in his life and people that helped him rise above adversity.

Jal began by telling us about his family. He was born in the southern Sudan, where his mother was a teacher and a nurse and his father was a policeman. At the age of seven, his mother died. His father, who had become a commander in the Sudan People’s Liberation Army, sent him to Ethiopia to attend school. When Jal arrived, however, he found out they had been duped. It turned out to be a city of young people ages five through thirteen. They did go to school for a while, however they went into a training camp for six to nine months where they learned how to fight and kill people. There were few adults and the aid workers were overwhelmed. The children fought for the next several years, suffering and enduring the horrors of the two Sudanese civil wars. They battled hunger, thirst, and endured unimaginable hardships during this time.

Jal told the audience of about 80 that he and the other children often asked questions like, “Why are we suffering like this? Where is my mother?” And why there was no one there who could answer their questions.

Some of them, including Jal, escaped. Jal soon met Emma McCune, a British aid worker, who later adopted him and smuggled him into Kenya so he could go to school in Nairobi.

In spite of and because of his circumstances, Jal began to write songs and sing about his experiences, hopes, and dreams. He has emerged as an internationally recognized performer in the music industry. Jal’s music is an innovative blend of hip hop and polyrhythmic African musical forms. It’s full of uplifting inspiration that preaches global unity, solidarity and peace. Jal encouraged his audience to look past the difference of religion, race, and ethnicity and instead be a united force to end discrimination and hate.

In response to a question about what Americans can do to help create social change, Jal said that we need to look for people who care and team up together to create a better world.

In addition, Jal is passionate about Gua Africa, a non-profit charity he founded that aids refugees of the Sudanese civil wars. This charity helps to build schools and foster education for the refugees of those wars. Another organization of Jal’s, Lose to Win, inspires individuals to lose something in order to win for the greater good. To learn more about this effort go towww.losetowin.net/Challenge.

This event was sponsored by the Dennis Brutus/Merrill Goldwyn Center for the Study of Human Rights, WSU Theme Semester, “Worcester in the World” and the Office of Diversity. 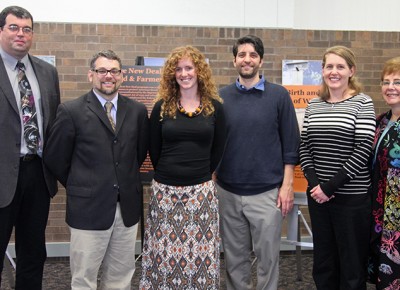 Panelists Shed Light on 'Who's Hungry?' Prior to Empty Bowl Event

Students, faculty, and staff filled the Blue Lounge and Exhibit Area of the Student Center on Thursday, November 10 in observance of Hunger Awareness Day. A forum titled "Who's Hungry?" ran from . . .