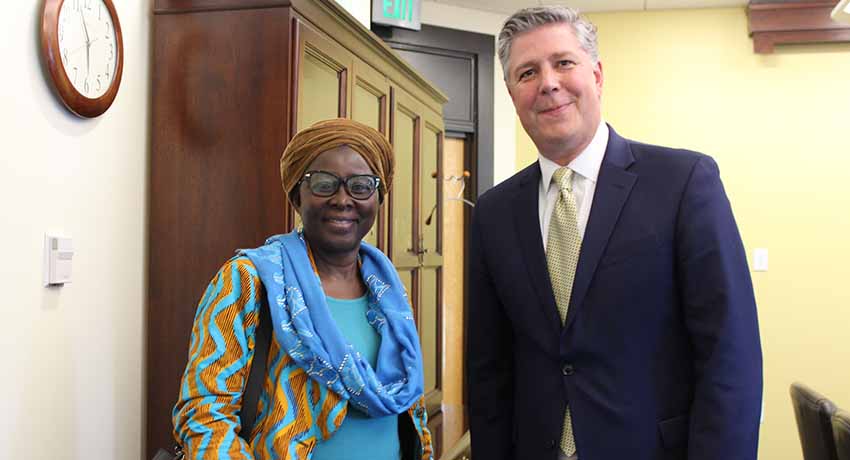 Worcester State University is one step closer to collaborating with higher education institutions in Ghana after a meeting between University officials and Ghana’s ambassador to the United States.

Hajia Alima Mahama, Ghana’s first female ambassador to the United States, met with President Barry M. Maloney, Provost Lois Wims, and other University representatives in the president’s conference room at Worcester State July 14.  The meeting was the first stop on the ambassador’s three-day visit to Worcester which also was slated to include a meeting with the Worcester Regional Chamber of Commerce and a town-hall style meeting with the city’s Ghanaian community.

To that end, President Maloney and Dr. Wims discussed with the ambassador ways to expand the University’s connections with Ghana and the Ghanaian people through educational and research collaborations with Ghanaian institutions, including exchange programs with faculty and peer post-secondary institutions and/or high schools. Among programs discussed was the Early College Program that helps high school students prepare for higher education while also giving them the opportunity to earn college credits.

Ambassador Mahama said she could see many possible points of connection with Worcester State’s educational programs, especially in biotechnology and clinical studies. “I believe research is very important,” she said. “COVID has been a challenge for all of us. I feel we need to develop both the infrastructure and human capacity to deal with situations that may come up and after COVID. We know there could be another virus, and we have to be prepared.” 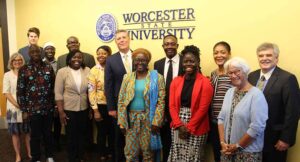 Worcester State University officials met with the U.S. Ambassador to Ghana Hajia Alima Mahama (center) on July 14, the first stop on the ambassador’s three-day visit to Worcester slated to include a meeting with the Worcester Regional Chamber of Commerce and a town-hall style meeting with the city’s Ghanaian community. (Photo by Nancy Sheehan)

Worcester State’s business program also could help Ghana bolster its plans to grow its economy to provide more jobs and better opportunities for its citizens, she said. Trade between the United States and Ghana amounted to about $1.5 billion in 2019, and cooperation with Worcester State could help strengthen those ties. “Our students could come here to learn about business and interact with business leaders, so I am looking for a strong relationship with Worcester,” she said.

The ambassador asked that a memo outlining objectives for a collaboration be prepared and said she would contact Ghana’s minister of education to introduce Worcester State officials to him. She suggested that a video meeting between the minister and Worcester State be set up, and that plans for a possible Worcester delegation to visit Ghana be considered. “I will send a memo to the minister, and from there we’ll start planning for next steps to make sure that we implement these objectives,” she said.

Worcester State officials initially had discussed a trip to Ghana after the Ghanaian president visited campus in 2019. “We were very interested in connecting more closely with institutions of higher learning in Ghana and were developing plans to make a trip to Ghana,” President Maloney said. “Then COVID hit, and we put all those plans on hold and now as we’re making our way out of COVID—fingers crossed—we’d like to see if we can restart those plans.”

Since 2011, when President Maloney arrived at Worcester State, the University has worked on forging memorandums of understanding with universities around the world, primarily focusing on countries connected with the heritage of the Worcester area population, such as England, Ireland, Italy, and countries in South America, Central America, and Asia.

“One of the things that I have been trying to promote with our students and our faculty is the notion that students’ learning time here at the University should include some study away, and we have seen some growth in this area,” President Maloney said. “We have had more faculty go out on Fulbright Fellowships and more students taking advantage of study abroad, but we have so far not spent a lot of time developing these kinds of relationships with institutions in Africa, and I feel it is imperative now to focus our attention there.” 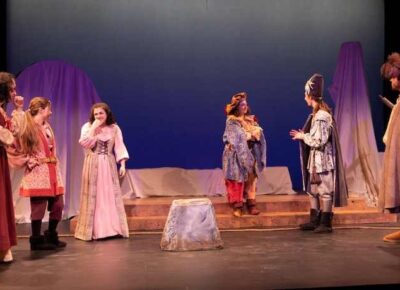 The Arts are back and stronger than ever