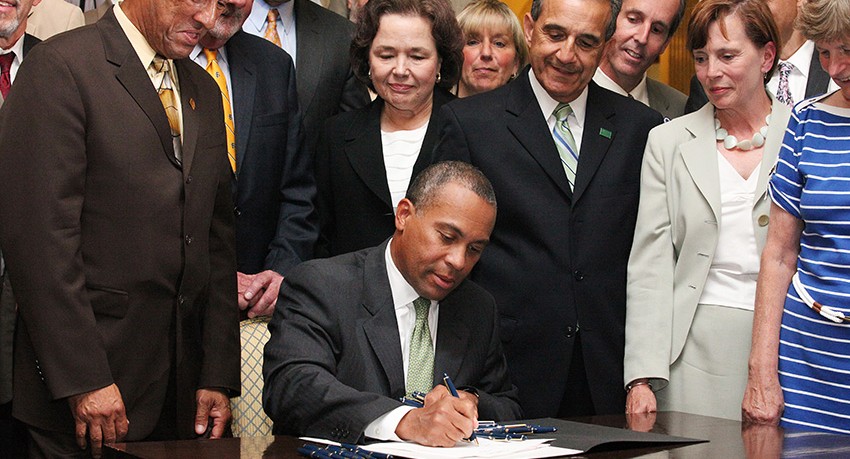 Massachusetts Governor Deval Patrick today signed into law legislation granting university status to Massachusetts State Colleges.  The Senate previously voted 34 to 2 to and the House voted 126 to 21 to support the measure.

Worcester State College will be known as Worcester State University, effective October 26, 2010.  The law will not raise tuition or fees or change admissions standards. “The college you have always trusted will now become a university,” said President Janelle Ashley, who attended the bill signing ceremony at the statehouse.

“This is terrific news for our students, alumni and faculty,” said Chair of the Board of Trustees John Brissette, who accompanied President Ashley and a delegation of students, faculty, staff and alumni from Worcester to Boston for the bill signing.

“Our students are entering a very competitive job market and this will help them. This will also help us attract more federal grant dollars to support faculty research,” said Brissette. “I am so proud, as chair of the trustees, and as an alum, added Brissette, “and I am so grateful to Governor Patrick, Lt. Governor Tim Murray and the legislature for ensuring that this historic measure is now law.”

“This is an historic day for our colleges,” said Frederick Clark, Executive Officer of the Council of Presidents of the Massachusetts State Colleges.  “As comprehensive institutions offering undergraduate and graduate degrees in a wide range of disciplines, the State Colleges all meet nationally recognized criteria of being universities. Now the state has recognized us for what we are.  We cannot thank Governor Patrick and our supporters in the state legislature enough.”

“The Massachusetts legislature has taken an important step forward in recognizing the fine work of our nine state colleges by voting to rename them state universities,” said Richard Freeland, Commissioner of the Department of Higher Education. “As I see it, this action simply aligns Massachusetts with the practice found in more than 40 other states, where public four-year and Master’s institutions were long ago designated as state universities. This action reaffirms the growing importance of our public higher education institutions. It represents a strong show of legislative support for the achievements of our faculty and students.”

Founded as the Worcester Normal School in 1874, the college was the fifth state-funded normal school in Massachusetts and one of dozens of teacher-training schools established during the 19th century. In 1932, all of the state’s normal schools were re-christened “teachers colleges” and the old Normal School became Worcester State Teachers College. That same year, the College moved to its present location on Chandler Street.

By 1963, the former teachers college had evolved into a liberal arts and sciences college, a transition acknowledged by the Board of Education in 1963 when it voted to drop the word “teachers” from the College’s name. Each year, more than 5,500 undergraduate and 1,000 graduate students enroll in classes at Worcester State College.

Despite many changes over its long history, the College’s mission remains the same as it was in 1874: to enrich the lives of its students and strengthen communities through the benefits of accessible, quality higher education.

The Massachusetts Senate voted last night 34 to 2 to support university status for Massachusetts State Colleges.  The house voted previously 126 to 21 to pass the measure. “I am delighted that . . .