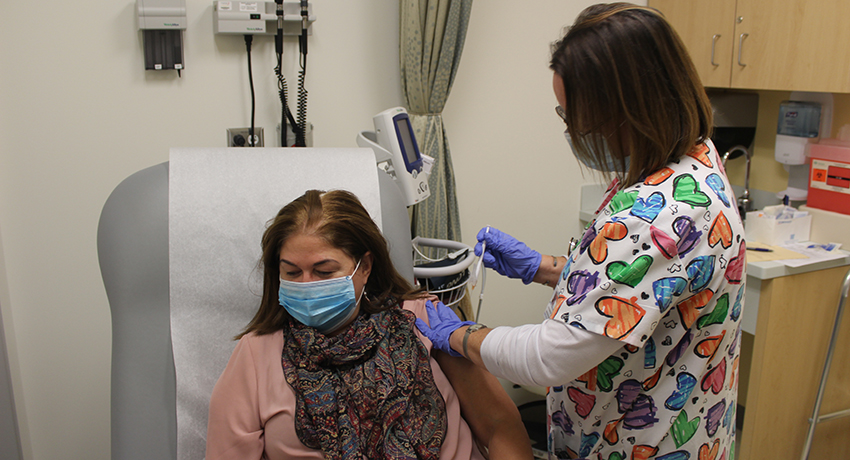 In Worcester, as well as nationally, the Latino community has been hardest hit by the COVID-19 pandemic. Hilda Ramirez, executive director of the Latino Education Institute at Worcester State, has found a way to help.

Ramirez is among local Latino community leaders who have volunteered for a late-stage clinical trial of a potential vaccine being conducted at UMass Memorial Medical Center. She hopes her participation helps to send a message that Latinos need to get tested for COVID-19 and take the vaccine once one is approved by the federal government. She also wants to encourage other Latinos to participate in ongoing clinical trials.

“There is a lot of misinformation among the Latino community and we hope we can influence others to be part of a solution,” she says. “Latinos tend to not want to get tested or to get a flu shot because they feel that they’re going to get sicker. I’m hoping that they will see us taking the risk and that it will push them to test themselves and take the COVID-19 vaccine when it’s available.”

Ramirez is a member of an equity task force at UMass Memorial Medical Center that looks at the data on how the pandemic is impacting various groups in the area. The researcher who is conducting the late-stage vaccine trial at UMass Memorial spoke to the task force asking for input on how to get more Latinos involved in the study. Matilde Castiel, M.D., a physician who is Worcester commissioner of health and human services and who had appointed Ramirez to the task force, decided to take a direct approach to the problem.

Ramirez accompanied Castiel for the initial injection, then both were required to take a booster shot a few weeks later. None of the participants knows whether they received the actual vaccine or a placebo. The process of administering each is the same.

“They made it easy,” Ramirez says. “They explain everything to you and make you feel comfortable. They do a lot of tests then they give you the shot. Now, they’re tracking us on a weekly basis with an app where we have to tell them if we have any symptoms and, obviously, if there’s a complication, then we go right to the doctor and let them know.”

Ramirez says a main reason COVID-19 has affected the Latino community so adversely is that many Latinos are front-line workers. “They’re the healthcare workers, they’re the people working in retail, they’re the people working with the public in many places,” she says. “So, they have more exposure. Some of us are fortunate enough to be able to work from home and be isolated, but some can’t stay home. They have jobs that they have to go to and that’s where a lot of people get infected.”

Ramirez hopes her volunteer efforts help address, at least in some small way, the suffering caused by the pandemic. “Any little bit that we can do to help with the vaccine is going to make things better for everybody,” she says. 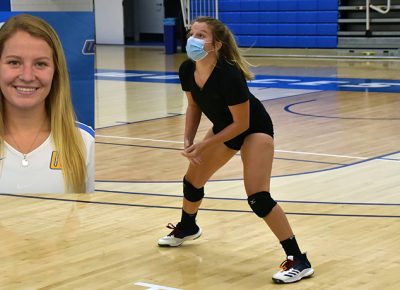 In Deciding Whether to Compete, Nursing Student-Athletes Weigh Risk to Clinical Hours

With this pandemic, Worcester State student-athletes had to make tough decisions about whether to participate this season, due to wanting to keep themselves and their teammates safe. For senior . . .