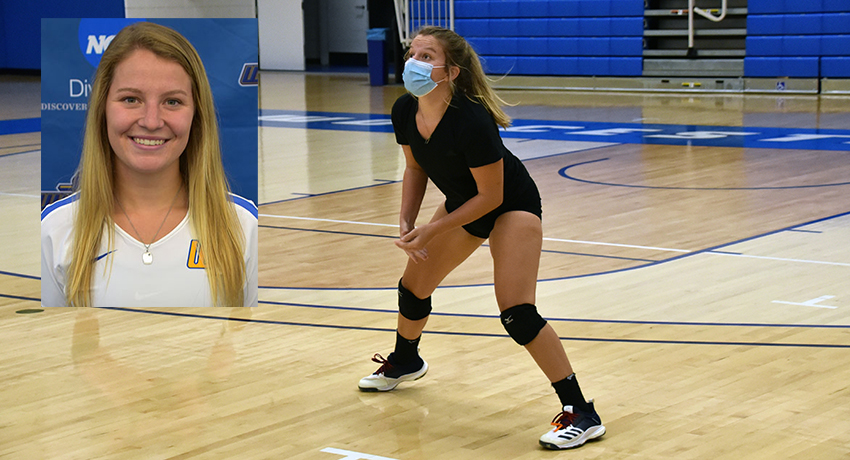 In Deciding Whether to Compete, Nursing Student-Athletes Weigh Risk to Clinical Hours

With this pandemic, Worcester State student-athletes had to make tough decisions about whether to participate this season, due to wanting to keep themselves and their teammates safe. For senior women’s volleyball player Madison Kuzio ’21, the decision was not so straightforward. Being a dedicated nursing student and employee of UMass Memorial Medical Center, the COVID-19 precautions she had to take were not only necessary to keep herself and her teammates safe, but to ensure she would graduate on time as well.

Kuzio has been working hard to become a nurse, following in the footsteps of some of her family members who also work in the medical field as physical therapists.

“I’m also kind of an adrenaline junkie,” she says. “I like working to be able to make things right when they go wrong.” Kuzio’s passion for helping people and keeping them safe led her to putting her academics first when the pandemic altered her fall semester nursing courses.

In order to graduate, Worcester State nursing students must complete a certain number of clinical hours—experience in professional medical environments. Kuzio was eagerly anticipating her fall clinicals, which involved shadowing a school nurse at Dedham High School. When schools began making decisions about how they were going to progress safely during the pandemic, the number of hours available to complete clinicals were cut down drastically. For Kuzio and other nursing students, this meant they had to attend every clinical available in order to reach the required hours to graduate on time.

Kuzio’s first thought was concern about getting sick and being unable to attend her clinicals. She realized she was at a higher risk of contracting the virus by attending volleyball practice than she would if she stayed home and only came in contact with her few roommates.

“I’d be practicing indoors with 15 people at a time,” she says. “And I was subjected to a higher risk than most because I’m still working in the hospital. I didn’t want to subject myself to my teammates as well.”

She initially decided to opt out of practice and focus on staying safe so she could attend her clinicals.

“Graduating on time was more important to me than being at practice. It would have been a much tougher decision if there was a full season with the MASCAC Championship to work toward,” she says.

“I had already kind of come to terms with the fact that my athletic career was over once the competitive season was cancelled, so I didn’t want to risk not graduating for just one more season,” she adds.

Kuzio was able to rely on her fellow nursing students for support when making her decision. She had conversations with women’s volleyball teammate Brooke Lamothe as well as a field hockey student-athlete Sarah Duff, who are both nursing majors facing similar predicaments.

When asked how she’s been keeping herself safe other than not attending practice, she was quick to admit she has always been kind of a germaphobe, so staying safe comes easy to her. “I’m more equipped when I’m working in the hospital because we wear goggles and face shields. Also, if I’m not working, I’m usually just studying,” she says

Interestingly, Kuzio’s situation did not end there. For a short period of time, her clinicals were moved to a completely online format, leaving her with the opportunity to complete her clinicals virtually, gaining enough hours to graduate without worrying about missing any due to sickness. Kuzio is now able to attend some practices when she is not working at the hospital, which allows her to stay connected with her teammates and get some time in on the volleyball court.

“I’m still being careful,” she says. “I get tested (on campus) once a week on Mondays, and have my results back by Tuesday.”

“This pandemic has presented difficulties to a wide array of people over the past seven months, and our student-athletes at Worcester State are no different,” says Director of Athletics Michael Mudd. “Madison and other nursing students have had it particularly difficult, as far as our athletes are concerned, having to decide between the sport she loves and completing her degree on time. The best thing about college athletics, especially at the Division III level, is that the student comes before the athlete, and Madison is a prime example of that.”

With just two weeks left in her clinical rotation, Kuzio was recently handed new information, yet again. Dedham schools would reopen, and in-person clinicals would be an option, as she had been anticipating since the summer.

“It is definitely something I am going to have to re-think again,” she says. She plans to look to her nursing advisor for advice, but knows in her gut what the right decision is. “I will probably make the same decision I had to make before and not practice for a little while. It’s only two weeks though, so hopefully I’ll be able to go back.” 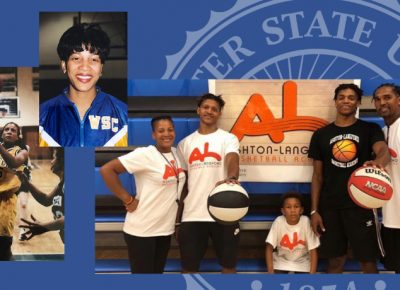 After Almost 25 Years, a Degree Earned, an Example Set

Sacha Ashton Langford ’20 had just given birth to her first son when Women’s Basketball Head Coach Karen Tessmer recruited her to play basketball for Worcester State in the mid-1990s. With child . . .