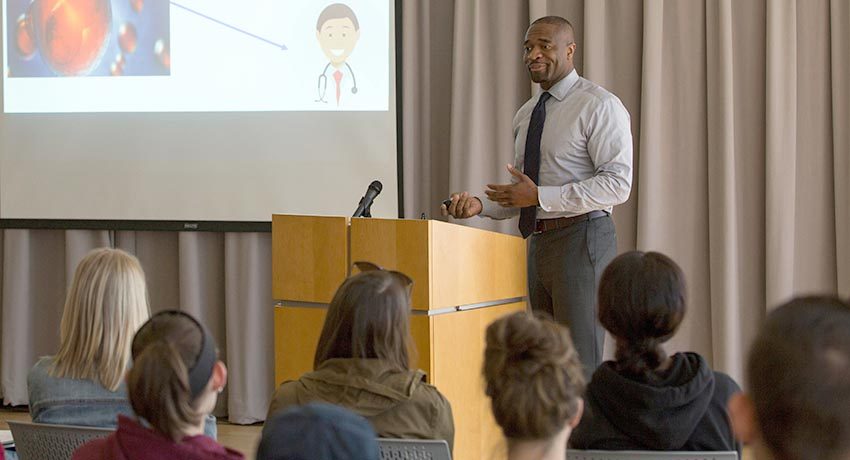 Taking research from the lab to the patient’s bedside is essential for the advancement of medicine, but the number of scientists who are also physicians is not growing, according to Imoigele Aisiku ’92, M.D., assistant professor at Harvard Medical School and chief of the Division of Emergency Medicine Care at Brigham & Women’s Hospital. Aisiku talked to Worcester State University students about the challenges faced by today’s physician-scientist during the kickoff lecture of the Brigham-WSU Bridge to Excellence series on Friday, September 29.

He said that he is evaluated—and he evaluates others—on a complex set of skills that are essential in today’s world of medicine. “Being a clinician is a baseline, but being an educator, innovator, researcher, and administrator are all parts of what we have to do,” he said.

Aisiku shared the National Institutes of Health model of moving research from the laboratory to the clinic—bench to bedside to practice—to emphasize the importance of being trained to turn research ideas into medical breakthroughs.

“Your success rate is going to be dependent on time and institutional support. If you don’t have the tools to take an idea to fruition, I might not be able to spend what few funds I have on you,” he said. “Your ability to take a project and succeed with it is as important as how good your idea is.”

With the Bridge to Excellence lecture series, sponsored by the Imoigele P. Aisiku, M.D., ’92 STEM Center, physicians from Brigham & Women’s Hospital will be visiting campus this academic year to offer guidance to students interested in pursuing careers in medicine.

“Our hope is to make you competitive now so that when you get to that point, it isn’t foreign to you. You already have a body of work and an area of interest so you can compete for different training grants in your career. The earlier you are able to get the tools you need, the better prepared you will be,” he said.

Aisiku touched on a number of topics in his talk, including the fact that there’s still an art to medicine.

“We living a world where we understand the molecular basis of disease and with that understanding, my patients ask me, ‘What’s the likelihood of this happening?’ or, ‘If I do this, what’s going to be the end result?’ And I give them an endless number of possibilities, maybes, and I’m not sures,” he said. “For a discipline that involves such complicated, intricate care, and for a discipline that is deeply rooted in science, there’s a whole lot of art to what we do.”

He also talked about how a decrease in government funding has caused a change in how industry-sponsored research is treated. Twenty years ago, research that had industry funds behind it was viewed with suspicion. “Now it’s very often a collaborative effort. Universities have learned that because the pot is shrinking from a funding perspective, collaborating with industry allows your richest talent to grow,” he said. 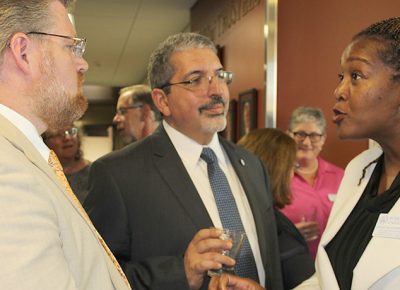 Quinsigamond Community College’s new president, Luis G. Pedraja, Ph.D., knows education has the power to transform lives. It certainly transformed his. He spoke about some of his background at a . . .