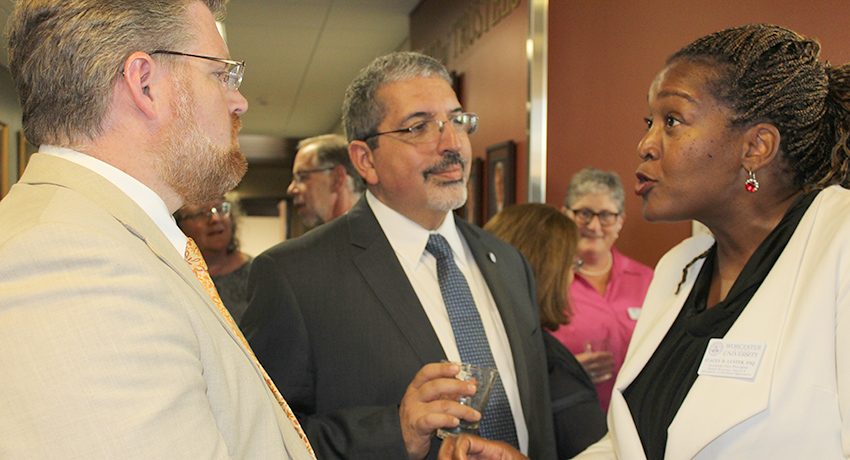 Quinsigamond Community College’s new president, Luis G. Pedraja, Ph.D., knows education has the power to transform lives. It certainly transformed his. He spoke about some of his background at a reception Worcester State University held in his honor September 14.

Pedraja emigrated from Cuba and grew up in a low-income Miami neighborhood. He was the first in his family to attend college and later earned a Ph.D. from the University of Virginia. His background gives him a special understanding of the challenges many students face in pursuit of higher education and the chance for a better life.

“Education is a worthwhile investment and I believe we should invest all that we have into it because it can transform lives,” Pedraja said, at the reception. “I’ve seen it happen in many lives and I’ve seen it happen in my life and it’s time for me to pay it forward. I certainly hope that you will join me in paying forward the benefits you have achieved from education so others can also have the same opportunity to fulfill their dreams.”

To that end, Quinsigamond and WSU have been involved in several collaborative efforts with plans for more in the future, Maloney said. “We collaborate more closely than most other schools here in the city, not only because the students we work with are so closely aligned – so many first-generation college students, so many of them coming from Worcester and Worcester County – but because it’s made sense,” he said.

Pedraja became president at QCC on July 10. Over the summer, Maloney had a chance to meet with him and begin discussions about current and possible future collaborations. Among the initiatives is an early-college proposal with the Worcester Public Schools, which involves QCC and the WSU enrollment management team, and is likely to go before the state’s Department of Education for potential funding.

Pedraja also has agreed to serve on WSU’s Latino Education Institute (LEI) Advisory Board, taking the reins from former QCC president Gail Carberry, who retired this spring. “It’s really all about introducing our students here locally to higher education in a really meaningful way,” Maloney said of the LEI.

The demographics of an ever-shrinking pool of potential students dictates that four-year and two-year schools collaborate, Maloney said. “The demographic numbers are concerning for all of us so it is in our collective best interests to work together,” he said, “And I am very excited, based not only on our initial conversations, but also what our executive teams have been working on already between the two schools.”

In addition to the daunting demographics, the educational landscape is changing rapidly in other ways, Pedraja said. By 2020, about 65 percent of jobs will require some college, he said. “Unfortunately, we’re falling short on training our population to meet that demand… There are a lot of places in our community and other communities that can’t find enough skilled workers and businesses that cannot expand because there’s nobody to fill the need.”

Collaborations on innovative ways to diminish the time needed to obtain a degree and the cost of higher education are among ways to open pathways for students who might not otherwise consider college, he said. “Creating those intentional pathways, wrapping ourselves around the students so that their success is our essential and most vital goal, will lead not only to their success but to the success of the entire community,” Pedraja said. “That’s what I have instilled in the faculty and staff at Quinsigamond, that our primary purpose is student success and I’m not going to rest until we have 100 percent student success. Now, some people say ‘You’re never going to get 100 percent.’ I say ‘Yeah, then we’re never going to rest.’ ” 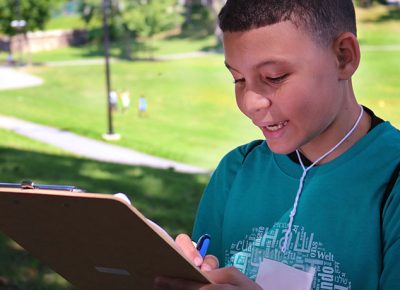 LEI Summer Program Connects Students with the Arts and Their Heritage

Started in 2015 by the Worcester Public Schools and Worcester State University’s Latino Education Institute, the “My Voice, My Community” program has grown to enroll more than 130 middle school . . .