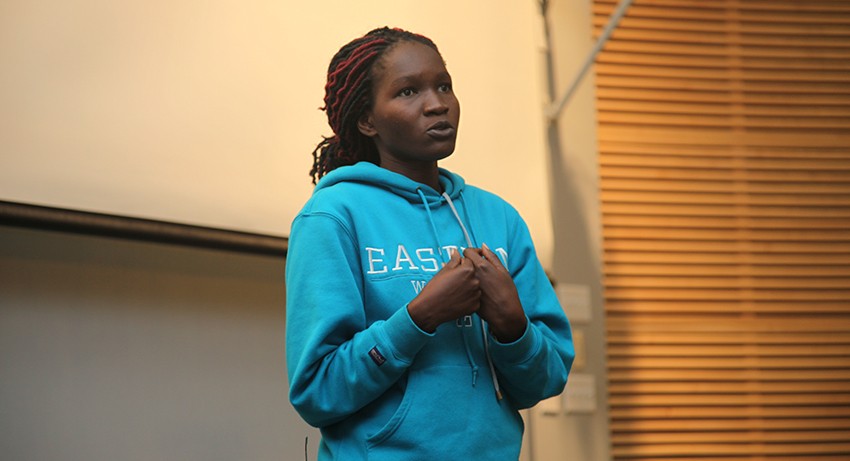 Representatives of the non-profit organization Invisible Children, Inc. told a Worcester State University audience last week of their campaign to end the victimization of children in Northern Uganda and the Congo through the exploitation of Rebel leader Joseph Kony.

Attendees viewed the film “Invisible Children; Rough Cut,” which chronicles Kony’s reign of terror including massacre of villages and abduction of young boys who are then forced to serve as soldiers in his army. Following the film, two young women who escaped Kony’s attacks told their stories. The film and talk were sponsored by the WSU Honor’s Program.

Brenda Akello was able to escape her village prior to a Kony attack by an advance warning from a hunter outside of her village. While fleeing, her father suffered a heart attack and subsequently died in a hospital on her fourteenth birthday. She dropped out of school, and with no money, her prospects were bleak. But, after obtaining scholarships, she finished high school in 2006 and is now graduating from college and speaking about her experiences with Invisible Children. She was joined by fellow survivor Benna Lanyero.

They both urged students to spread the word about the film and the website. In addition to producing the film, the organization is working to raise funds to build radio towers in the Congo to set up an early warning system so more people can be aware of Kony’s movements.