“I often spend a lot of my time in my room on my computer doing things like animation or making songs, so the two weeks didn’t feel very different than, say, my summers,” Weber says. “The difference is that I haven’t seen my friends in a while and I feel isolated. There was a lot of time to think about memories I have from other times in my life when I’ve gone out the most.”

And so, during the two weeks away from studies as Worcester State faculty and staff prepared to transition to distance learning due to COVID-19, Weber used his emotions as inspiration for his music. He emerged from spring break as the sole writer, singer, and producer of the instrumentals for a pop-style song he calls “Just Like You.”

The song’s reviews on Weber’s YouTube channel of 17,900 subscribers reflect the first-year student’s creativity, professionalism, and talent. “Catchy,” “powerful,” and “polished” were just a few listeners’ descriptions of the song. Another fan responded in a post and called the tune the “new quarantine jam.”

“Ireland’s ability to channel whatever he is feeling into his art during this unprecedented time is exactly what we are encouraging our students to do,” says Visual and Performing Arts Chair and Theater Professor Adam Zahler. “We are all feeling many emotions—confusion, worry, hope, and more. I applaud Ireland for following his instincts, turning to his passions, and also allowing us to enjoy his great work.”

Weber says he began singing when he was “really young,” and he insists that he wasn’t a natural at the art. He says his technique progressed at Wachusett Regional High School, where he joined an a cappella group. During his senior year there, he says he was accepted into the Wachusett Honors Choir and received training that brought his singing to new levels.

“It got a lot easier to hit high notes, which is my favorite, and be a tenor,” says Weber.

The singer says that he started writing “little songs” during his freshman year of high school, when a friend often gave him original instrumental tracks.

“I would add these little melodies and put them on my YouTube channel,” he says.

By junior year, Weber says he was creating longer songs. And this year at Worcester State, a friend introduced him to an instrumental program called FL Studio. Weber’s a cappella singing has continued at Worcester State, too, where he is a member of the Chorale and performed earlier in the school year in Old Sturbridge Village, at a couple of churches, and for a “90s night” fundraising event at El Basha restaurant in Worcester, as the Chorale singers prepare for an international tour to Spain next year.

“Ireland joined the Chorale this past fall and has become an important member of our Chorale ‘family,’” says Dr. Christie Nigro, music professor and director of the Chorale. “I am proud that he has used his time during this crisis to create something new and beautiful.”

Weber’s creative talents don’t end with his singing. While Weber is planning to minor in visual and performing arts, he is also majoring in communications, where he studies and creates digital media productions, another art that caught his attention at a young age.

“When I was nine, I was introduced to YouTube by my brothers and I started making videos where I would take my Lego toys and make them go on adventures,” Weber says. “I started getting into stop motion because I always really liked animation and I’m a really big fan of cartoons.”

Weber’s Youtube channel, “WebzForevz,” showcases his music and digital animation to an impressive following. A cartoon episode he posted two weeks ago, “’Til Death Do Us Pizza” has received more than 67,000 views.

“I have the pleasure of having Ireland in my Applied Media Literacy course,” says Professor Emanuel Nneji. “He brings great organization, maturity, and application of theory to his work. Congrats to Ireland for his creativity inside and outside of the classroom.”

Weber is the youngest of five siblings, with three older brothers and an older sister. He looks up to his siblings, who are at home together in Rutland at this time. The first in his family to attend college, Weber attributes his artistic interests to his family.

“My older brothers liked rap and made music, and it was common sense for me to join in art as well.”

Click here to listen to the song Weber created over spring break. 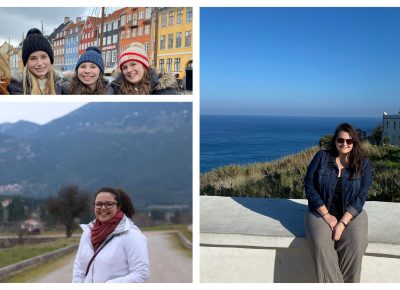 Worcester State students studying abroad, told to come home at the beginning of the COVID-19 pandemic in March, were disappointed that their experiences were cut short, but happy to come home as . . .