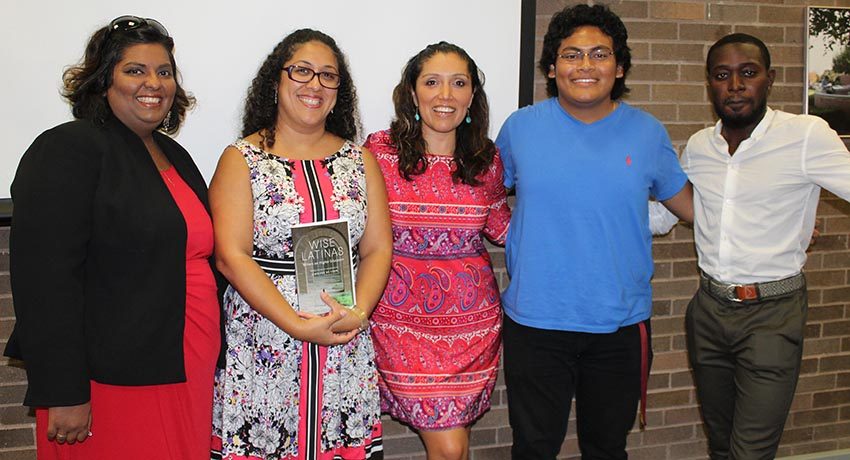 Author, educator, and activist Jennifer De Leon wants Latinos to take charge of their own stories. “If you don’t share your story, other people will share it for you,” De Leon said, in a September 26 talk that helped kick off Latin Heritage Month at Worcester State University. “That’s kind of what’s happening right now in the mainstream media, in the news—other people are sharing our stories and we need to take back the pen and understand that we’re the ones in the driver’s seat.”

De Leon’s talk addressed ways in which “the story” can provide insight into the complex intersection of race, class, and educational issues, dispelling myths and showcasing the diversity of the Latin community’s experiences in higher education.

Special programming for Latin Heritage Month began a couple days earlier with a cultural trip to New York City on September 24 and will close with a lecture by Juan Carlos Galeano, director of the film “El Rio.” In between, an inspiring variety of speakers, film screenings, and other events will round out the bill.

The Multicultural Affairs Office is working with the Third World Alliance, Latino Education Institute, and other WSU student organizations and departments to sponsor these events, which tie in with President Barry M. Maloney’s “points of action” for a more inclusive campus.

Laxmi Bissoondial, advisor for Third World Alliance and the assistant director of Multicultural Affairs, said that it is important for WSU students to see themselves reflected in Latin Heritage Month programming, such as De Leon’s talk.

“She knows what it means to be a Latina in higher education and can speak about of the obstacles on campus and even within her own family that she had to navigate in order to graduate,” Bissoondial said.

WSU student Natalia Vasquez, whose parents came to this country from Chile, said Latin Heritage Month’s events, several of which are open to the public, help spread awareness of Latin culture. “It’s very meaningful, just getting more of our culture out there for people to be more aware of it,” she said.

Many students of non-Latin ancestry, including first-year student Lindsey Zanni, also attended the talk. “I read an article that she wrote about her life so I’m really excited to see her in person,” Zanni said, about De Leon.

After a decade teaching in Boston Public Schools, De Leon is now an English professor at Framingham State University and a creative writing instructor at GrubStreet Independent Creative Writing Center, as well as a freelance writer, editor, and consultant. The American-born daughter of Guatemalan immigrants, she is the editor of “Wise Latinas: Writers on Higher Education” (University of Nebraska Press). She also has designed college-access programs and has mentored first-generation college students.

DeLeon spoke about her journey as a writer and about the way in which storytelling can help students in their careers, along their life paths, and in their own artistic journeys. She told a moving anecdote highlighting the gulf between her background and the lifestyles of her classmates at Connecticut College, a private liberal arts institution in New London.

“When I went to college, mostly everybody was white, upper class, blond, super privileged—I mean going sailing on the weekends, going to France for March break. I just never had been exposed to people like this,” she said.

In most cases, she was able to work through the cultural differences with other students, but not always.
She said that once in her government class, they were debating if ATMs should have Spanish as an option on the screen.

“And one girl whose name was Barbie—that was actually her name—said, ‘I’m sick and tired of making calls and people saying press 1 for Spanish or if I go to the ATM and it says English or Spanish. Why do I have to choose? This is America. We should just speak English,’ ” De Leon recalled. “At that moment, there were about 40 kids in the class and I felt 80 eyes right on me. I just felt, like, why do I have to be the representative of my whole tribe? That moment was very uncomfortable.”

She didn’t respond to Barbie at the time, but said she has since learned the value of speaking up and taking control of the narrative when incidents like that occur.

The campus has additional opportunities to participate in Latin Heritage Month: 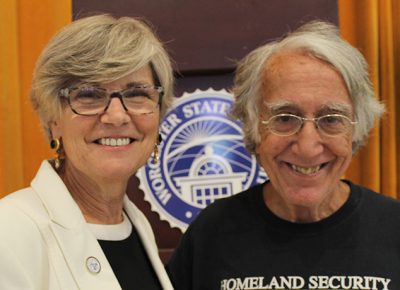 David Barsamian Warns Against Attacks on Truth, Facts, and Science

Legendary journalist David Barsamian kicked off the Worcester State University Provost’s Series on Democracy and Diplomacy with a call to political action and a plea for planetary cooperation on . . .