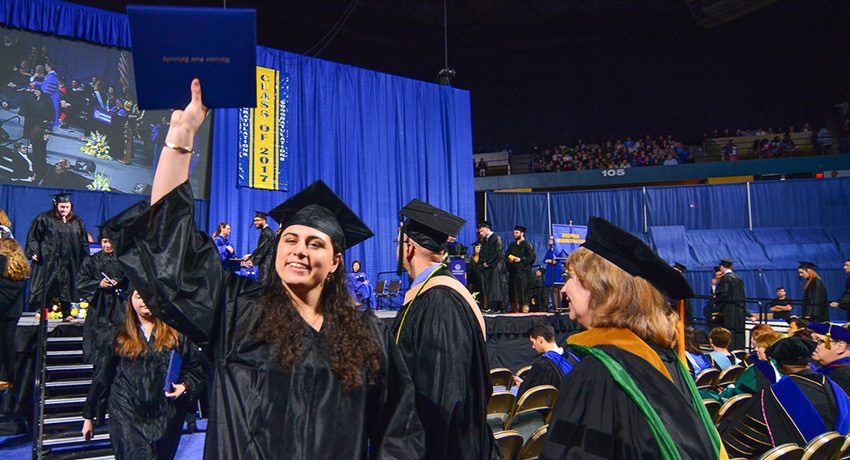 Joe Andruzzi Tells Graduates to ‘Keep Reaching for Your Goals’

Worcester State University conferred more than 1,100 degrees to the undergraduate Class of 2017 during commencement on Saturday, May 13 at the DCU Center. Among those congratulating the students on their achievement were SGA President Andrew Huy Ngo and chair of the 2017 Class Committee, Corey Laite.

“As you graduate, remember the world is your oyster and we are all now able to take advantage of the opportunities that life has to offer,” Ngo said. “Don’t be afraid to fail or make mistakes, because mistakes are what make us stronger and smarter. Here’s to continuing this lifelong journey of discovering the different things that we are passionate about.”

Laite encouraged his fellow graduates to “think about what we worked on to earn this commencement, of the dedication it took. Remember thinking if every hour you put into studying was worth the stress and the lack of sleep. I am here, speaking to you today, to tell you that it was worth it!”

The commencement speaker, former Patriots linebacker Joe Andruzzi, agreed. Whether it was raising his grades in the final years of high school, studying to be an elementary school teacher at Southern Connecticut State University, playing football for SCSU, training for the NFL Combine, or playing for the Green Bay Packers, New England Patriots, and Cleveland Browns, Andruzzi said that he always knew success required hard work and dedication.

“Set your goals high. Through hard work and dedication, you will succeed,” he encouraged the graduates. “Your positive attitude will set the tone for the direction in your lives. Your resilience as human beings will overcome obstacles that are placed in front of you.”

Andruzzi recalled the two days between getting cut from the Packers and receiving a call to join the Patriots. “Right then and there, I realized the true definition of the NFL: Not For Long. Not for long, as in meaning life. There is so much meaning to that. Whether it’s football, business, whatever field you’re in. A lot of things don’t last that long, and you’ve got to cherish every moment,” he said.

He also noted that “you don’t get many opportunities in life, and here was my second opportunity, and I wasn’t going to waste that.”

As the Patriots’ starting left guard, he helped the team win three Super Bowls. Next, he went to play for the Cleveland Browns.

Soon after being cut from the Browns in April 2007, “life came at me fast,” Andruzzi said. He went to see his doctor and was diagnosed with Burkitt’s lymphoma, “a very rare, aggressive form of cancer that doubles in size in 24 hours.”

He returned to New England “to get some of the best treatment that I could ever receive.” Following three months of intense treatment, Andruzzi found himself battling depression.

A serendipitous call from the mother of a child with Burkitt’s lymphoma put Andruzzi on a path to mental wellness. She was “looking for some inspiration for her son,” who is now a pediatric oncologist in New Hampshire.

“He did more for me than anything,” Andruzzi said. “I hung up the phone and looked over at my wife, Jen, and said, ‘We can do a lot of good with this.’”

That led them to establish the Joe Andruzzi Foundation in May 2008. To date, the foundation has helped 6,300 families and individuals throughout New England, he said.

On April 15, 2013, Andruzzi was hosting a Boston Marathon watch party for foundation supporters in the Forum restaurant when a bomb went off outside. He was among the bystanders who sprang into action to help victims of the two bombs that exploded that day. He recalled pushing barricades aside and carrying a woman to an ambulance.

“It’s how you react, how you respond to different obstacles in life,” he told the graduates.

Andruzzi cautioned them not to dwell on the past. Instead, plan for tomorrow while also focusing on the present.

“Enjoy what’s in front of you today. Keep cherishing. Keep reaching for those goals. Keep moving forward. And keep living life in a positive manner,” he said.

President Barry M. Maloney shared the stories of three graduates: Ross Reynolds, a criminal justice major; Andrea Nasiff, a psychology major; and Isaac Ofori, a biology major. “Each graduating senior’s story, to me, reveals what kind of people choose to come to Worcester State University,” he said. “Their stories also reflect the impact this public university has had on their personal development.”

To all the graduates, he said: “My long years of experience in public higher education tell me that through the course of your years here, the public mission of this place seeps in, and changes you, in ways that will help you make your way in the world, and in turn, make the world a better place.” 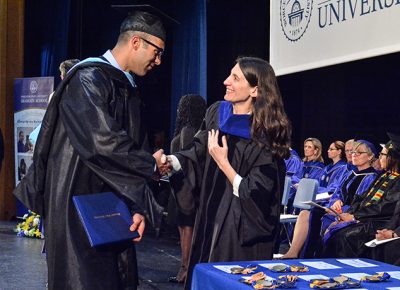 With the sound of bagpipes filling the air, almost 200 candidates for graduate degrees in fields as diverse as biotechnology and elementary education filled the Sullivan Auditorium with their . . .