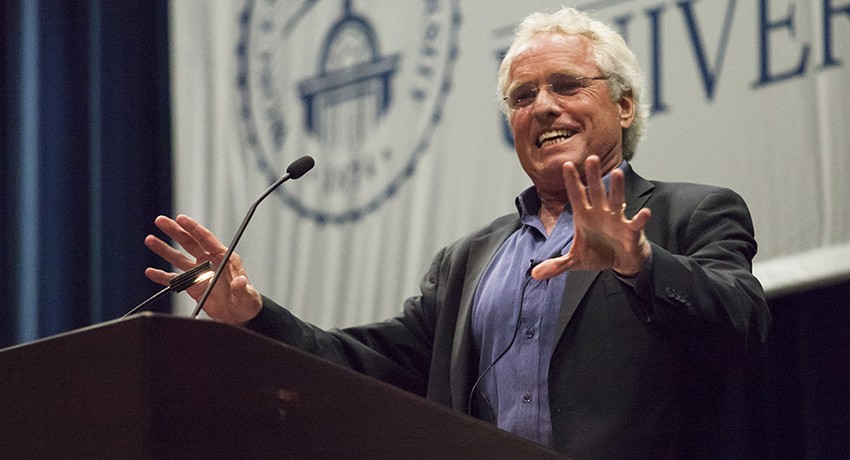 Sometimes seeing a glitch in the system can spark an idea. That is how Joe Kennedy began his non-profit that provides free oil to the poor.

Featured speaker at the Worcester State University Presidential Lecture on Oct. 1, Kennedy shared his story with an audience of about 200.

“Back in the 1970s, I was talking with a buddy about the huge profits that oil companies were making while people in the U.S. were literally dying from the cold because they couldn’t afford to heat their homes,” said Kennedy, founder of Citizens Energy Corporation. “We thought: What if even a small percentage of the profits from these oil companies could be used to help people who really needed it?”

That was the spark that set Kennedy on a course spanning nearly 30 years of growth for Citizens Energy. The organization now consists of seven separate companies, including the largest energy conservation firm in the U.S. and one of the largest independent lifters of crude oil. Revenues from these commercial enterprises fund charitable programs in the U.S. and across the world.

Junior communication major Courtney Spinelli was inspired by Kennedy’s message of helping others.

“It was eye-opening for me to see how one person has been able to reach out and help so many people,” said Spinelli. “Sometimes we need to hear these stories so that we know that we can, and should, go out and help others who may be in need.”

“Mr. Kennedy has reached the heights of his field, he has helped others, and above all, he embodies what Worcester State students set out to do – change the way the world works,” said Maloney.

Kennedy answered questions from the audience including one from Sociology Department Chair Matthew Johnson. He asked Kennedy to share his advice for students who want to become social entrepreneurs.

Kennedy responded: “Hold on to the dream of making this a better country. If you have those values within you, then you will get the support from companies and organizations that you need to move forward.”

He said that he was honored to speak at Worcester State University and that he rarely talks publicly about Citizens Energy Corporation, preferring that the work speak for itself.

“This is the kind of university that I really look up to – the students, faculty and people of the city of Worcester – it just means the world to me,” he said.

Last evening (September 24) a student reported an alleged armed sexual assault that happened on campus earlier in the week. An investigation is underway and is ongoing. The investigation is being . . .