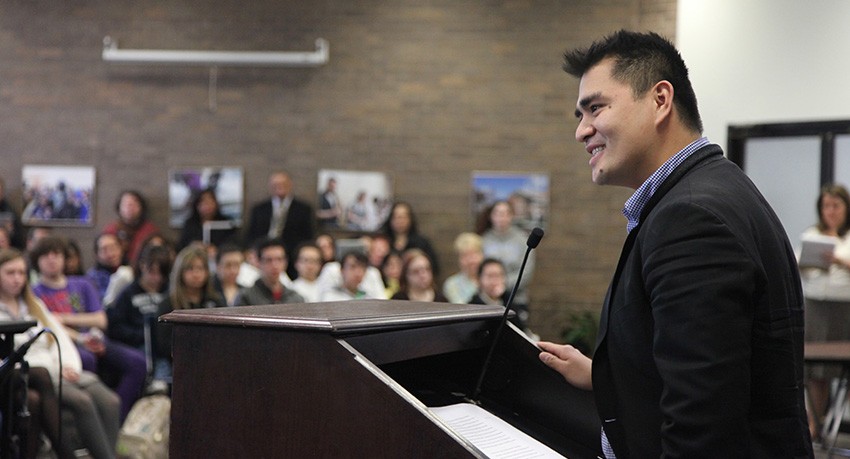 Journalist Jose Antonio Vargas, this year’s Courageous Conversations guest speaker, said that since co-founding the organization Define American 10 months ago, he has collected more than 500 videos that show that no one has the same idea of what makes someone an American. He gave the lecture, titled “Define American: My Life as an Undocumented Immigrant,” to more than 300 students, faculty, staff, public school students and teachers, and members of the general public on Wednesday, March 15 in the Student Center’s Blue Lounge.

Vargas was born in the Philippines and sent by his mother to live in the United States with his grandparents when he was 12. Vargas found out he was an undocumented immigrant when he was 16 and decided to obtain a driver’s license. When his green card was denied at the Department of Motor Vehicles, Vargas went to his grandfather to question him. His grandfather told him not to show his green card to people anymore, and that he was not a legal immigrant in the U.S. Vargas did not know how to take this news and was very confused, so he hid the fact he was undocumented until later in life.

When Vargas turned 17, he decided to become a journalist. He said that, “journalism helped validate my existence,” and it “helped make sense of the world around me.” Vargas believed journalism “helped connect the dots of knowing where I came from.” After graduating from high school and college, he became a Pulitzer Prize-winning journalist and an activist. He wrote for some of the most prestigious new organizations in the country, including The New Yorker, Huffington Post, and The Washington Post. He has received esteemed recognition for work by the 2010 Tribeca Film Festival and also appeared on programs such as CNN, ABC News, the Colbert Report, and PBS Newshour, among others.

Vargas’ essay in the New York Times Magazine in June 2011 titled “My Life as an Undocumented Immigrant” disclosed his story, stunning the media and political circles and attracting worldwide coverage. The essay was the top read story on Google for two weeks in a row, prompting many people to tell their own stories about undocumented immigration.

Vargas saw how people were reacting to his story and decided to start an organization with three friends called, “Define American.” The goal of the organization is to talk about immigration and encourage people to think about the complexities of the subject. “We were all immigrants at one time; we all came here from somewhere,” Vargas said. He also said that in 1890, the U.S. was made up of 15% immigrants compared to 12% today. Yet, Vargas said the media promotes the idea that immigrants are taking over the country and taking away jobs from “real” Americans, he added.

Vargas showed several videos, including one of a teenager telling how her best friend was in the U.S. illegally and another of a woman whose husband was killed in an automobile accident in which the other driver was an undocumented immigrant. “An American is someone who is in the country for the love of freedom; that’s why we are Americans,” she said, adding that race, color, religion, or ethnic background should not define whether people are American.

“We all have a role to play,” Vargas told the standing-room-only audience. He encouraged documented young Americans in the audience to “value being here and having your citizenship.”

During the question-and-answer segment, a woman who said she was a graduate of WSU stood up and told Vargas, “Your story inspired me to not be afraid to be who I am.” She then made an emotional confession that she too is an undocumented immigrant. Truly moved, many in the audience applauded as she walked to her seat.

This lecture was sponsored by Third World Alliance, Office of Multicultural Affairs, International Programs Office, Amnesty International, and the Dennis Brutus/Merrill Goldwyn Center for the Study of Human Rights. 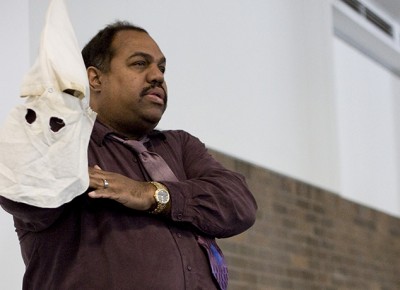 Daryl Davis’ quest to find out why some people think they are superior to others simply because of their skin color began in 1968, he told a rapt audience of students, faculty, staff, and . . .