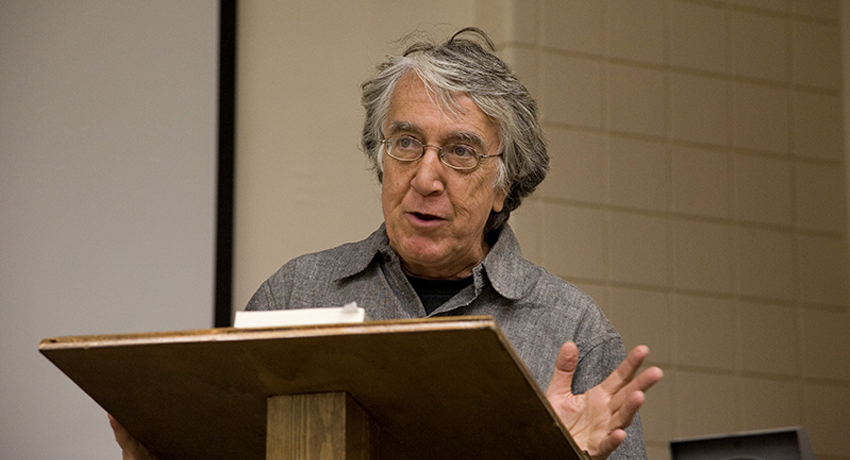 Journalist Advises Students to Beware of ‘Weapons of Mass Distraction’

Renowned journalist David Barsamian told a crowd of more than 80 Worcester State College students to be careful consumers of information when he delivered the lecture What We Say Goes: Pakistan, Iran, and US Foreign Policy, Friday, September 12.  The Center for the Study of Human Rights sponsored the lecture and in addition a second talk Imperialism Old and New, later that evening.

According to Barsamian, the number of corporations controlling U.S. media sources has declined from 50 in 1978 to only five today.  This loss of diversity in the marketplace of news, he says, has resulted in little attention paid to world news and weapons of mass distraction.  He describes this as a mass news market that places more emphasis on platitudes than facts.

One example he addressed is Iran.This nation has a complicated history in U.S. news, according to Barsamian.Because the nation has the second largest oil reserve in the world, he maintains, U.S. interests worked to undermine a democratic government elected in the 1950s that sought to nationalize oil to return more of the nations resources to the country rather than international oil interests. This, he said, coupled with U.S. support of Iraq in an armed conflict with Iran contributed further to tension in the region.

He also had harsh criticism for profiteers.  He stated that Exxon posted record profits, beginning in 2005 of $38 billion and growing to $40 billion in 2007.  This part of the economy is doing very handsomely, he said, while other parts of the economy, including housing, are seeing conditions similar to the Great Depression.

Barsamian is the award winning founder and director of Alternative Radio (AR), the independent weekly series based in Boulder, Colorado. AR presents information and perspectives that are ignored or distorted in the corporate-controlled media. The one-hour program is broadcast on more than 125 public radio stations around the world. Barsamian is also national producer of Making Contact, another weekly radio program. His interviews and articles appear inThe Progressive, The Nation, Z and other journals and magazines.

Barsamian is the author of numerous books with Noam Chomsky, Howard Zinn, Eqbal Ahmad, and Edward Said. His series of books with Chomsky, America’s leading dissident, have sold in the hundreds of thousands and have been translated into many languages. His latest books are What We Say Goes with Noam Chomsky and Targeting Iran.

An initiative to increase qualified nursing faculty at area colleges begins this month at Worcester State College. Funded through a $120,000 grant from the Fairlawn Foundation, area nurses will . . .