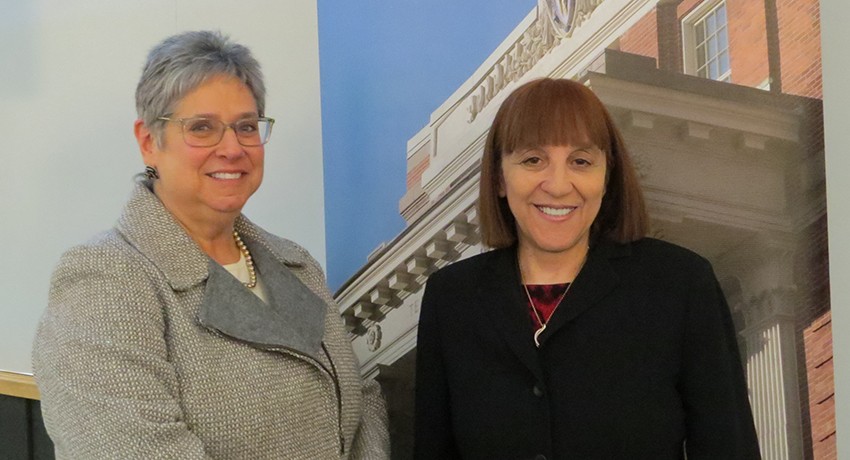 Judge Carol A. Erskine simply could not say no to the invitation to speak at the Candace Allen Scola Memorial Lecture at Worcester State University, despite her heavy caseload at Worcester Juvenile Court. She spoke in honor of Scola, who was a judicial secretary in Erskine’s office prior to her 2002 murder, a crime that has not been solved.

Erskine’s lecture on the traumatic impact of domestic violence on children reflected her experiences at the Worcester Juvenile Court, to which she was the first justice appointed in 2006, as well as with diversion and prevention programs underway in local schools and hospitals.

Erskine told the audience gathered in the Ghosh Science and Technology Center’s lecture hall on Wednesday, February 8 that before Candace’s untimely death, the two had talked about Candace’s eagerness to return to Worcester State so that she could continue her studies in elementary education. “She absolutely loved children, so working in the juvenile court was the right place for her, but she really wanted to teach,” Erskine said.

Erskine was aware of the troubles that were happening in Candace’s life at the time, saying that they had had several “quiet and confidential conversations” about the subject of domestic violence, which Candace said were helpful in understanding her situation.

“I couldn’t help but be worried about her,” she said. “I had long been involved with Candace’s struggles, and it was a worrisome time for all of us.”

“It is really important to me, not only to get information out there about children who are involved or witnessing domestic violence, but particularly in memory of Candace,” Erskine said.

The judge said that she could cite any number of cases, studies, and statistics to demonstrate the effects of domestic violence on children, but declined to do so, as she knew that professors would be able to share that information with the students in the audience as well.

“While there are many studies that provide statistics about the effects of domestic violence against children, I frankly don’t need a study or a statistic to tell me what is painfully obvious: Children are traumatized by domestic violence in their homes and their relationships, and it impacts them in various and very damaging ways,” Erskine said.

Domestic violence, unfortunately, is an ever-present element in the judge’s courtroom. In the last five years in Erskine’s jurisdiction of Worcester County, there have been 2,813 child abuse petitions filed in her court to request the removal of a child from their home due to their endangered welfare. As a result, over 4,000 children have been place in substitute care, either foster care or with family members, and a majority of these cases have been caused by domestic violence. Violence, abuse, neglect, and sexual assault are, sadly, common themes.

“We have seen children who have witnessed the death of a parent after months and years of violence, or have witnessed brutal attacks within the home, said Erskine, “and it becomes the responsibility of the juvenile court to then determine what is in the best interest of these children, and whether they can ever return home, or if they should be freed for adoption or released to the permanent custody of family member.”

As a result, the lingering effects of the trauma and subsequent PTSD can severly impact a child’s ability to adjust to everday life, she said.

“Often the seemingly simplest of cases, such as a truancy case, becomes complicated when, for example, a truant child reveals that he stays home from school to protect his mother from an abuser out of fear that something terrible will happen,” she said.

Some children and teenagers even mimic the behavior of their abusers, engaging in assaultive behavior against others or their significant others. To combat this, Erskine created a one-day program in the Worcester Public Schools called “The Grace Project,” which invites clinicians and friendly police and probation officers to meet with troubled elementary students and discuss why the children engage in destructive behviors.

“The deal was, ‘You keep these kids out of court, and we’ll participate in this one-day program with you to divert these kids from entering the system,’” she said. The program currently has a 90 percent success rate, which Erskine said is a win-win for everybody involved.

Erskine stressed that programs like these, as well as state and federal social services, are essential for the well-being of these children and families, but long waitlists have created a detrimental crisis for these individuals. She called on the state Legislature to provide more support.

“While it is proper to protect the privacy of the children in our court, the shield from public scrutiny prevents legislators and governmental agencies from truly recognizing the need to adequately fund treatment,” she said. “These children are the most under-serviced of the commonwealth, and human service agencies are underfunded in a way that prevents these children and families from getting the appropriate services.”

Erskine’s visit was sponsored by the Women’s Studies Program, which hosts the Candace Allen Scola Memorial Lecture. The annual lecture was established to honor Scola, who was a geography and education student, vice president of Gamma Theta Upsilon, and member of the Geography Honor Society. 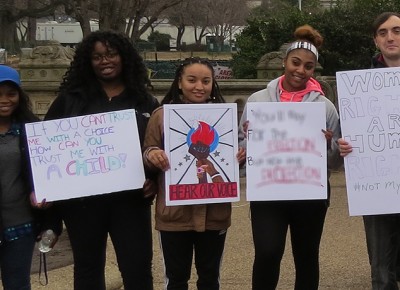 WSU Students Join in the Women’s March on Washington