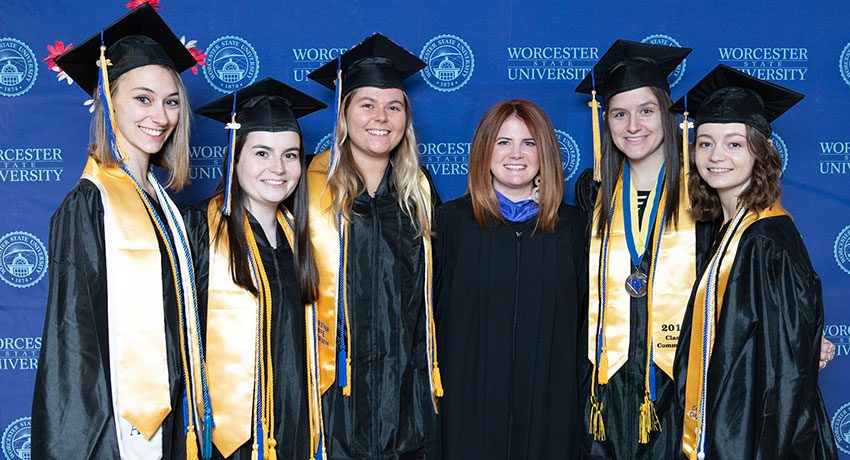 Running a highly successful bakery is no piece of cake. Just ask Renee King Diaz ’12, owner of the Queen’s Cups, who was the keynote speaker at Worcester State University’s 143rd commencement exercises at the DCU Center on Saturday, May 18.

In all, 1,236 students were eligible to walk across the DCU stage, a figure that includes those who completed their requirements in August and December of 2018.  The graduates’ walk through life, although it may turn out to be equally as rewarding, will nevertheless be much more complex, Diaz told the Class of 2019.

“Whether you own a business or not, things are going to happen in your life that shake you to your core and make you wonder why you are going through it,” she said. “But if you keep pressing forward, life is going to get you where you are supposed to be.”

Although she had graduated only seven years earlier, Diaz was speaking from experience.

Inspired by cable TV baking shows, Diaz started her business in her parents’ kitchen while still a student at Worcester State, thinking she would whip up a few treats for family and friends. But her cupcakes and handcrafted desserts were a huge hit and, within just a few years, the Queen’s Cups has become a million-dollar hot spot for people looking to satiate a sweet tooth.

During that often-trying time, the kitchen-based enterprise moved into a small shop in Diaz’ hometown of Millbury then, in 2017, to a high-profile location in Worcester’s trendy Canal District—a progression that has not gone unnoticed.  Recently, the Small Business Administration named Diaz the Young Entrepreneur of the Year for Massachusetts.

“I sound pretty cool. I sound like maybe I have my life together, which is why I think it’s even more important for me to be here today as your speaker,” Diaz said. “I want you to hear me tell you that I have cried many times over the years because of situations that I have gotten myself into.”

Those sometimes overwhelming situations included the strain of relentless 16-hour workdays, the fact that working so much led to her having the flu on her wedding day, and how, while she was getting all sorts of praise from the media and friends, the stress of it all made her at times a very difficult person to be around. Things got so bad at one point that she prayed someone would buy her business to relieve her of what seemed a crushing burden.

“But somehow over the past few years, I have figured some things out,” she said. “I have made great strides to not work as much. I have admitted that I needed help and accepted it. I have worked tirelessly to be a better boss. I have learned to appreciate those who lift me up and not pay too much attention to those who do not wish me well. I’ve focused on what matters in life, but it took me years and a lot of work to get to this point.”

In relating her struggles and their successful resolution, Diaz said she hopes it will help graduates stand strong when they face adversity. “This is a moment in my life that I will never forget, and I hope that I am able to touch your lives, too, and make you realize how normal it is to be a little lost at times,” she said.

Diaz said she still often feels a little lost but has learned to follow her dreams even through uncertain times. “No one is going to know you better than you know yourself,” she said. “You will encounter people who think they know what’s best for you, but they won’t. They can’t see inside your mind and heart.”

Other people may think your ideas are crazy, as many did when Diaz started The Queens Cups, she said, and many people expressed doubts about the venture. “But I never focused on those who didn’t believe in me,” she said. “I worked on being better than I was the day before. No matter what you choose to do, keep in mind that your dreams are your dreams. They aren’t for anyone else to understand. Let go of their judgements. Be genuine in your endeavors and opportunities are going to come your way.”

In his remarks to the graduates, President Barry M. Maloney said that, after the Class of 2019 unanimously chose Diaz to be its commencement speaker, he took a closer look as why Worcester State graduates—like her and so many others—are succeeding. A recent survey, he said, shows that 99 percent of WSU grads are employed or in graduate school within six months of graduating.

“To those of you in the audience who have nurtured someone who will cross the stage today—you may be chomping at the bit to turn your grad’s bedroom into a home entertainment center,” he said. “Worcester State has you covered! Our programs, when met by the kind of student you have raised, have uniquely prepared them for this dynamic economy.”

Before the conferral of degrees, the University presented Diaz with a Community Service Award, highlighting the many contributions she has made to organizations, groups, and the communities of Worcester and Millbury.

Provost Lois A. Wims served as Master of Ceremonies for a slate of speakers that, in addition to Diaz and Maloney, included state Sen. Harriette L. Chandler; Elena Quiroz-Livanis, chief of staff and director of academic policy & student success at the state Department of Higher Education; Craig L. Blais, chair of the Worcester State University Board of Trustees; Donald F. Bullens ’69, ’75, associate professor in the WSU Communication Department, who lead the procession with the ceremonial mace; and Meaghan Dougherty, chair of the Class of 2019.

Dougherty encouraged her fellow grads to continue working as hard in life as they did in earning their college degrees.  And, as Diaz did, she spoke of the importance of staying true to one’s dreams.

“Confidently go in the direction toward accomplishing your dreams. Continue to face challenges head on, make your mark, and make us all proud. I am so thankful to have shared these past four years with you,” she said. “Congratulations again to the Class of 2019. We did it!” 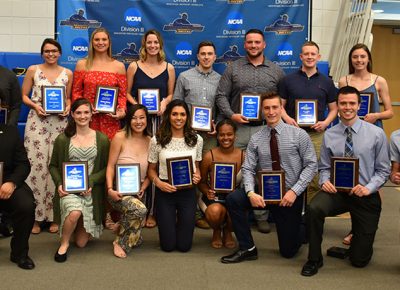 Seventeen Worcester State University student-athletes were honored on Monday, May 6, at the annual athletics award banquet held on the John P. Brissette Court in the Wellness Center. Seniors Marcus Vieira the men's track & field teams, Michaila Parent of the field hockey team, and Brittany Herring of the women's basketball team took home the biggest honors of the night as recipients of the . . .