Koestner Stresses Need to Deal with the Roots of Sexual Violence

Katie Koestner, the first survivor of date rape to publicly come forward, visited Worcester State University on Thursday, April 26 to speak with students, faculty, and administrators about her experience with sexual violence and the effects of gender norms.

Koestner has been a leader in the movement to end sexual violence since she took her own solo stand to speak out nationally at age 18 in 1991. Thanks to Koestner’s efforts, much has changed in federal and state laws regarding rape and domestic violence.

“When I was willing to come forward, I didn’t know that no name had ever been printed before,” Koestner said, referring to privacy rights for rape victims. “I assumed that law said that you could say ‘no’ and be respected. But the law had nothing to do with that.”

Koestner also went beyond telling her story by explaining the historical context of rape as well as leading a group activity that compared and contrasted gender norms in American society.

“To me, one of the important things when we try solve problems is that we need to dig deep to the root,” she said. “We need to think about some of our underlying problems with this issue.”

When Koestner was raped by a fellow classmate during her freshmen year at William and Mary College, she found herself surrounded by unsupportive friends, administrators, and even her own parents in an age where the concept of “date rape” did not exist. She was on her own, but she refused to give up.

“I said to myself, ‘Katie, you have two options. You can go back to your dorm, and shut up, apologize to your parents that you did the wrong thing, and that you won’t have any more boys in your room. Or, you could walk across the street to the campus police station, and risk it all’,” she said. “And the reason I did that was that you have to risk it all to do the right thing, and I knew it was the right thing because I knew he would do it again.”

After the college refused to suspend her rapist, Koestner wrote an article titled “The State of Virginia is Educating a Rapist,” which described her ordeal. The story became one of the first documented date rape stories covered by American media, and was instrumental in bringing about comprehensive legislation concerning domestic violence and sexual assault, especially on campuses.

“Regardless of feminist theory, or law and policies, it was just me saying, ‘I know how awful I feel right now, and I will blame myself forever if I don’t try to make sure that no other woman feels like that,’” she said.

After appearing on the cover of TIME magazine on June 3, 1991, Koestner worked with HBO to make a documentary film about her story. Subsequently, she has appeared on nearly 50 national television programs, spoken at more than 1,500 college and school campuses, and led over 400 Take Back The Night marches and rallies.

The event was sponsored by Student Affairs and was part of the campus’ observance of Sexual Assault Awareness Month. 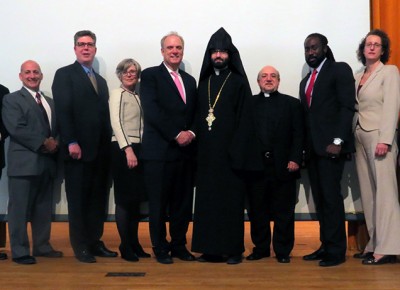 Author: Stories Can Raise Awareness of the Armenian Genocide

Armenian American author Chris Bohjalian recently spoke to a supportive crowd in commemoration of the 101st anniversary of the Armenian Genocide at Worcester State University. His passionate remarks . . .