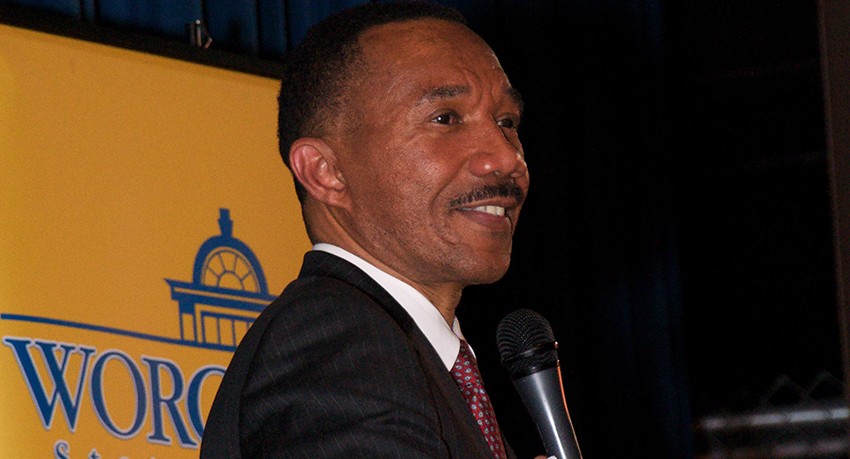 NAACP CEO, Congressman and author Kweisi Mfume told the crowd gathered for Worcester State College’s annual Courageous Conversations lecture to “define yourselves. Don’t let pop culture or others tell you who you are.”

Kweisi derided current pop culture and urged students to strike out on their own path. “When we allow song lyrics to defame us, we have to stand up and say, ‘We have a problem.’”

He urged students instead to get involved and make a difference, stressing that the need is critical. He cited statistics showing that one out of six children lives in poverty; 2 million people lost their pensions last year; 1 million more lost their jobs; and 47 million people in the U.S. are worried about health care.

But he stressed that the situation is not hopeless. “I have not given up on the American Dream, and I ask that you not give up,” he said.

He admitted that to persevere is sometimes difficult, but told the story of how he turned his own life around and embraced a life of community activism. “When I was in high school, I dropped out at age 16 after my mother died of cancer,” he said.

The experience hardened him, and he found himself “running with a gang” and fathering five children out of wedlock by age 22. He remembers the fateful night when he began to turn it around. “Something came over me,” he said. “I saw my mother and felt her deep disappointment in me. I was cold in the middle of a hot July night.”

It wasn’t easy “because you don’t just turn in your letter of resignation to a gang,” he said.

But Mfume persevered. He received his GED, attended community college, and transferred to a baccalaureate institution to complete his bachelor’s degree, and ultimately earned a Ph.D.

Mfume served as national speaker for the Obama for America Presidential campaign. He got his start in politics winning a grassroots election for Baltimore City Council by only three votes in 1979. During his seven years of service in local government, he led the efforts to diversify city government, improve community safety, enhance business development, and divest city funds from the apartheid government of South Africa.

In 1986, he was elected to the U.S. Congress, where he served on the Ethics Committee and the Joint Economic Committee of the House and Senate, where he later became the chairman.  He successfully co-sponsored and helped to pass the American with Disabilities Act and strengthen the Equal Credit Opportunity Law. He co-authored and successfully amended the Civil Rights Bill of 1991 to apply the act to US citizens working for American-based companies abroad.  He also sponsored legislative initiatives banning assault weapons and establishing s talking as a federal crime. Mfume also served as Chairman of the Congressional Black Caucus, and during his last term in Congress, he was appointed by the House Democratic Caucus as the party’s Vice-Chairman for Communications.

Mfume became President and Chief Executive Officer of the NAACP on February 20, 1996 after being unanimously elected to the post and served there for nine years.    Mfume is credited with helping to raise over 100 million dollars in outside contributions for the organization while at the same time developing its national Corporate Diversity Project and establishing 75 new college-based NAACP chapters.  His five point program of advocacy included civil rights enforcement, educational excellence, economic empowerment, health advocacy and youth outreach.  In 2006, he was a candidate for the United States Senate from the State of Maryland.

He serves as a member of the Gamma Boule Sigma Pi Phi Fraternity, the Most Worshipful Prince Hall Masons, and Big Brothers. In addition, he serves on the John Hopkins University Board of Trustees, the Morgan State University Board of Regents, the African American Advisory Board of PepsiCo, and the National Advisory Council of Boy Scouts of America.

In 1984, he earned a master’s degree in liberal arts, with a concentration in international studies, from Johns Hopkins University. In addition, he is the recipient of 10 honorary doctorate degrees and hundreds of other awards, proclamations and citations. He is also author to the autobiography No Free Ride.

The talk, titled “Obama’ s America:  Where do we go from here?,” will be followed by a book signing. It was sponsored by Third World Alliance and the Diversity and Multicultural Affairs offices. 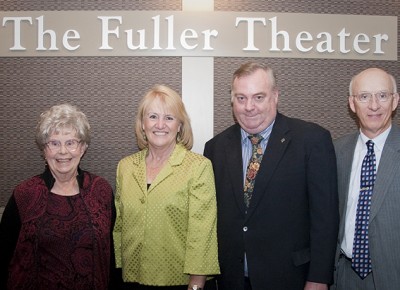 On opening night of Worcester State Theatre's production of "Bus Stop" last Thursday, trustees of the George F. and Sybil H. Fuller Foundation were praised for enabling the transformation of the . . .