The 2020 season started just like any other for the Worcester State University women’s lacrosse team and junior goalkeeper Chloe O’Brien. Through four games, the Lancers were 2-2, with non-conference victories over Smith College and Gordon College. Between games four and five, however, everything changed.

On March 10, O’Brien and her teammates were informed that their team’s upcoming Spring Break trip to Florida had been cancelled, and the following day, the team played what proved to be its final game of the season, a loss to Johnson & Wales at Coughlin Field.

Minutes after the final horn, the NCAA announced the cancellation of all winter and spring championships, effectively ending the season for college athletics nationwide.

When O’Brien went back to her home in Sturbridge, Mass., to finish out her semester remotely, she immediately went to work at her job at The Overlook, a retirement community in nearby Charlton.

Normally a certified nursing assistant (CNA) and resident care assistant (RCA) in the memory care unit, O’Brien’s role at the facility has been slightly altered in response to the pandemic. In addition to her usual responsibilities of caring for approximately 15 of the facility’s residents, she has become a screener for The Overlook, taking visitors’ temperature  and asking a series of health questions.

As of May 14, and likely in part due to her diligence, O’Brien was proud to report that there has not been a single case of COVID-19 at her facility, but the staff is still not cutting any corners. “I worry about my residents and their health even more now,” she says. “I feel awful that I had to turn away family members on Easter and Mother’s Day. We do not even allow floral deliveries or hand-delivered cards.”

O’Brien’s experiences on the women’s lacrosse team have been vital to her new expanded role at the facility. “Being on a team, you learn to work with others, strive for the same goal, help each other, and always be there for one another,” she says. “At the facility, you are essentially a part of a large team. You need to be able to communicate with one another, work hard to complete your duties, and help each other just as you would on a team. Being part of a team has made me a better employee by giving me strong leadership skills and adaptability.”

In the beginning, O’Brien admits that there were some bumps in the road at the facility, but some quick thinking on the part of the entire staff on new policies and procedures have things running smoothly again. When O’Brien started working her shifts as a screener in March, she was originally operating outside in the cold under a tent, but the facility has since built a shack to make the long days spent outside more comfortable.

O’Brien, a psychology major, can see herself working at The Overlook long-term after her graduation next May. Her next goal is obtaining her licensed practical nursing (LPN) license. “I love my role as a CNA and RCA, but I have my sights set on working as a therapist for the residents,” she says.

Naturally, O’Brien has her concerns about contracting the virus, but is selflessly more concerned with those around her. “I am in contact with 200 to 400 people on a given day, and there is always the chance that one of them is infected,” she says. “My facility notifies us when someone has been tested, and you worry and wait until you hear the results, but my biggest fear is bringing the virus home and infecting my family.”

“Chloe is very selfless on and off this field, and this is especially apparent now during this pandemic,” says head women’s lacrosse coach Kelly Downs. “She is willing to help anyone in need during this time and does it with great poise, leadership, and patience. I couldn’t be more proud to have her a part of the Worcester State women’s lacrosse program.”

This selflessness and leadership landed her a spot on the MASCAC’s Spring Sportsmanship Team.

Despite the high stress of working in a retirement community during a global pandemic, O’Brien has been able to stay positive by surrounding herself with people—and pets—that lift her spirits. “I have a supportive family, a loving boyfriend, great teammates, good friends, and, of course, my two cats and my dog who bring me immense joy.

“To get through this pandemic, I keep reminding myself that my family and I will be okay if we continue to be vigilant and use personal protective equipment.”

This article was originally posted on the Worcester State Athletics website. 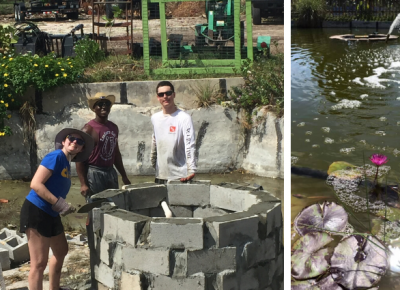 Like a Purple Messenger From a Brighter Time, a Pond Grows in the Florida Keys

Members of a student group opened their social media posts on Tuesday, May 5, to find that the well they built in 2019 had created a bubbling pond and a vibrant purple lotus flower was blooming atop a lily pad. The caption of the Facebook photo was, “Good Morning.” The photo of the flower was posted by Grimal Grove, an eco-friendly educational park, where a team of students has taken a . . .