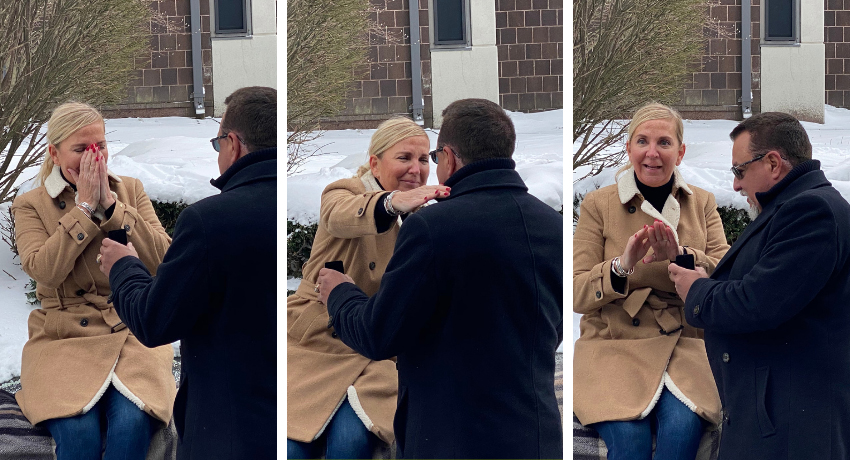 When they met at a Chandler Village party in 1982, Kevin Kramich ’85 was playing hockey and Beth Walker-King was supporting the team as a reluctant cheerleader, pushed into the role by her cheerleading friends. The single date that ensued from that encounter lacked discernible romantic sparks, so the two continued on their separate paths to adulthood—he as a successful travel industry executive and she as an infectious disease nurse and the assistant director of nurses at the North End Rehabilitation Hospital.

Almost 30 years later, they reconnected on Facebook and decided that, despite the long lapse in time, a second date was in order. This time the connection was undeniable, and the two have been together ever since, a total of nine years.

While neither felt the urgency to make their union official, certain life events, such as Kramich retiring early after 35 years at the same travel company, changed the dynamic. He decided to pop the question near the site of their original meeting—Chandler Village.

“I made up some story about the school honoring me for my hockey career and told her they wanted a photo of us,” says Kramich. “We walked around campus and when we came Chandler Village, I presented her with the ring. She had no idea. I was mostly concerned with dropping the ring in the snow.”

Walker-King accepted the proposal with happy tears. By prior arrangement, President Barry Maloney and Vice President for Advancement Thomas McNamara ’94 were on hand to offer hearty congratulations and capture the moment in photos.

“Everything good in my life after the age of 18 has come from Worcester State. It keeps giving and giving and giving,” says Kramich, who as a student was captain of the hockey team, vice president of his class, assistant editor of the yearbook, and manager of the campus pub. “Worcester State gave me a chance to play hockey and get a college education, and that helped me succeed in my career, which allowed me to travel to 60 countries on every continent. I made life-long friends, and it allowed me to meet my fiancée.”