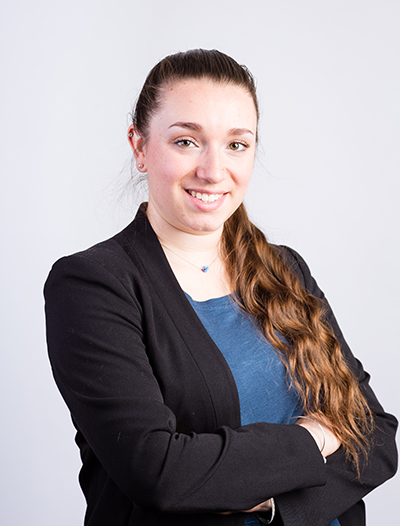 Maria D’Angelo, a recent graduate of the Master of Occupational Therapy program, happens to love handwriting, and that formed the basis of her research project on the effects of weighted pens on the performance and satisfaction of handwriting in older adults.

“I have always been told I have neat handwriting, I enjoy writing in different fonts, and I’m very interested in calligraphy,” she said. “I find handwriting for fun to be calming and an outlet.”

In addition, researching an aspect of handwriting would relate to her future career an occupational therapist. “It is common for [OT students] to help children with this important skill, but I wanted to bring something to it that was different,” D’Angelo said.

She chose to see if older adults encountered handwriting problems. “When the literature showed that there was, I decided to see if a weighted pen, one of the tools occupational therapists use to help children with their handwriting, would also help older adults,” she explained.

“My research showed that for the majority of people, the weighted pen did not help, but for the group of people whom it did help, their performance and satisfaction with their handwriting increased, and they indicated they would use the pen in their daily lives,” D’Angelo said.

Despite the possibility of a low adoption rate, D’Angelo recommends that occupational therapists “consider weighted pens as a treatment option for older adults who are having trouble with their handwriting” because “they are inexpensive and pose no risk to clients.”