Patrick Hare, ’12, MS ’14, assistant for government and community relations in President Barry Maloney’s office, was a tour leader recently for a Higher Education Consortium of Central Massachusetts (HECCMA) event at which a new promotional video was premiered. Before the premiere, which was held at the Worcester Beer Garden downtown, faculty, staff, and administrators from HECCMA member colleges and universities boarded special WRTA buses for a first-hand look at the “new Worcester.”

Hare, and his co-guide, Che Anderson, deputy cultural development officer for the city of Worcester, narrated the hour-long tour, which included a look at recent and ongoing developments of retail, entertainment, and cultural attractions in the extended downtown area.

The video, produced by HECCMA and the city of Worcester, shows prospective students the new, exciting developments happening in the city. Member colleges and universities from throughout the area participated, with students from each institution making appearances, including six Worcester State students. 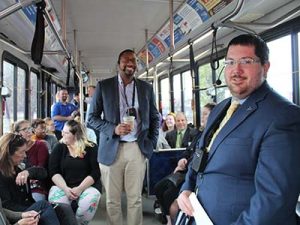