A robust group of students and community members gathered via Zoom to hear student perspectives on the election and direction of the country on Wednesday, Nov. 18. Following the student discussion, which was led by Jaymi Lynn Souza ’20, Anna Johnson ’21, Vincent Pelligrino ’22, and Eric Miller ’22, three community leaders—State Rep. Russell Holmes, Celia Blue, and Cynthia Peters—gave their perspectives on critical issues that need to be addressed by the government as we transition from the Trump Administration to the Biden-Harris Administration.

This panel’s focus was to begin to tackle the difficult political climate of this election and the result. The framing question of the discussion was: Where do we go from here? All speakers provided insight and words of wisdom on the future and how they plan to be a part of this changing American climate.

Holmes, a state representative from the 6th Suffolk District, has been a member of the House of Representatives since 2011, and his recent focus has been on police reform. He spoke about police reform in the state, and how in light of recent events, including George Floyd and Breonna Taylor’s death at the hands of police officers, it became one of the major controversies of the election in November. 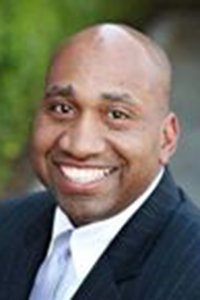 How elected representatives respond to this issue can drastically change the direction the country and how it will be moving toward in the coming years, he said.

According to Holmes, “Massachusetts is one of four states in the country that does not require the licensing of police officers. Our proposal would put in place an officer certification process while also placing restrictions on the use of chokeholds and tear gas.”

The House passed a bill through a 93-66 vote on July 24, offering similar policies: the creation of a police certification system, the prohibition of chokeholds, and rolling back the use of no-knock warrants. A compromise bill was recently sent back to state lawmakers by Gov. Charlie Baker, who requested changes.

In addition to Holmes, the audience heard from Celia Blue ’00, the founder of the Massachusetts Women of Color Coalition. She spoke of the need for more equity on boards and commissions throughout the commonwealth. Cynthia Peters, of World Education, discussed issues involving fair housing in the Boston area.

The event was sponsored by the Binienda Center for Civic Engagement and the History and Political Science Department. Assistant Professor Anthony Dell’Aera, Ph.D., said, “Although most of the post-election conversations have focused on faculty, pundits, and policy experts, I was particularly interested in hearing from our students in a formal setting outside of the classroom (virtual and otherwise). Our students have been anxious to talk to a broader audience about the current state of our political environment, what happened in the election, and where do we go from here. Their insights are not only equally valid but also invaluable as part of the public discourse, and I look forward to continuing to engage them in events like this one.”