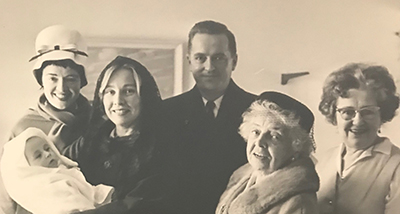 An act of kindness by an early Worcester State alumna is being remembered decades later by her late nephew through the establishment of an endowed scholarship in her name. The unexpected $25,000 gift was forwarded to WSU by the lawyers settling the estate of Kai Hekker, whose aunt, Geraldine Condon, Class of 1914, helped his wife, Constance, attend college, setting her on a successful career path at a time when few women had careers outside the home.

The gift will establish the Geraldine Condon Memorial Scholarship for female business students interested in accounting.

Geraldine, a school teacher who never married, was very involved in the upbringing of Constance and Tom, the children of her sister Grace, who was widowed at a young age. With the strong encouragement of Geraldine, Constance wanted to go to college after high school, but received no other family support for her dream.

“There was a sense that girls didn’t need that much education at that time, and my mother’s relatives suggested she stay home to care for her mother and brother, who had disabilities,” says Stephen Hekker, Constance’s son. But Geraldine refused to let that happen and gave Constance hope and some financial help to attend the University of Rhode Island, where she earned a bachelor’s degree in accounting.

“Geraldine was gracious and kind enough to also step in and help on the home front. My mother was forever grateful to Geraldine for her support and encouragement and this gift was her small way of giving back,” says Stephen.

Upon graduation, Constance began her career as one of the first female auditors on the staff of Price Waterhouse. In 1973, Constance changed careers and became a real estate broker for Braden Associates and shortly thereafter founded what was recognized for a time as the largest independent real estate firm in Connecticut.

Kai emigrated from Denmark in 1950 and worked in logistics for a German supply company before eventually working for Constance in the real estate firm. They were happily married for 47 years and had two children, Stephen and Susan. When Constance died in 2002, she left instructions in her will to donate money to Worcester State in Geraldine’s name, and that wish was fulfilled after Kai died in January 2018.

“My mother’s attitude was that if you worked hard, you can do anything,” says Stephen.

In a nod to Constance’s successful career, the Geraldine Condon Memorial Scholarship will be awarded to a female business administration and economics major with a concentration in accounting.