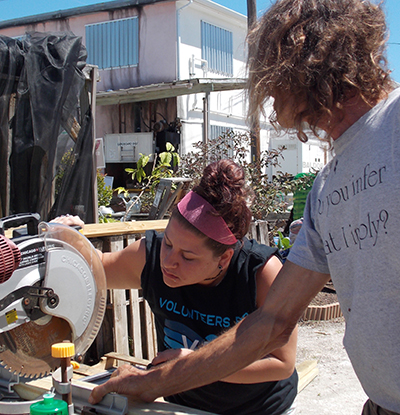 Madison Thomas cuts a board with a saw at Grimal Grove.

Once Woo Serve announced the trip to Grimal Grove in the Floriday Keys, there was high student interest, and all the available seats were quickly taken, according to junior psychology major Madison Thomas, who, as vice president of the student group Woo Serve, served as the trip’s student leader. In the end, 10 students (eight members of Woo Serve and two members of the Community Leadership Experience at Worcester State) and two advisors went.

“The grove originally belonged to a guy named Adolf Grimal. He came to the Keys alone, all by himself. He had this vision of creating this edible park,” she said. “After he had passed on, the whole grove fell into disrepair. Patrick [Garvey], who owns the place now, is working toward getting grants … to revive Grimal’s idea, his dreams for this grove.”

Returning the tropical fruit grove to its previous natural beauty is in its third year, and Garvey relies on volunteers to get much of the work done. His nonprofit organization, The Growing Hope Initiative at Grimal Grove, has partnered with the Southeast Rural Community Assistance Project. That partnership is how the director of WSU’s John J. Binienda Center for Civic Engagement, Mark Wagner, Ph.D., found out about Grimal Grove.

“I love the idea of ‘volun-tourism,’” Thomas said. “It was a perfect balance between the two. It was really nice to go to Florida…but I was actually really excited to work at the grove and doing something I’ve never done before in learning about the different fruits and trees and the history of the grove and how far it’s come in three short years.”

The group flew to Fort Lauderdale from Worcester Airport and drove three hours in a 14-seat van to Glad Tidings Church on Key West, where they lodged for the week. “We drove down to Big Pine Key Monday through Friday, and we worked from 9 till around 2, helping out around the grove—planting, weeding, painting,” she said.

I can’t imagine what it looked like before. After we left, it looked even better!

“We didn’t wake up dreading that 7:30 a.m. wake-up call to go to the grove,” Thomas said. “We would wake up excited to go. It was hard work, but it was extremely rewarding, especially being able to see the progress because it’s still in those stages where it’s not completely finished. So you get to see the progress you made.”

Afternoons were spent at the beach, and students met back at the church for dinner, taking turns cooking a favorite meal. They spent evenings in Mallory Square, where they experienced the nightly sunset celebration.

“Everyone would go to the pier, and there would be street performers,” Thomas said. “No one got bored of seeing the sun set. It was right on the water so it was beautiful to watch. Once it hits the horizon, everybody starts cheering, clapping, and taking pictures. Before you know it, the sun is gone.”

The students headed back to Massachusetts proud of the impact they had on the grove.

“It’s gorgeous,” Thomas says. “I can’t imagine what it looked like before. After we left, it looked even better!”