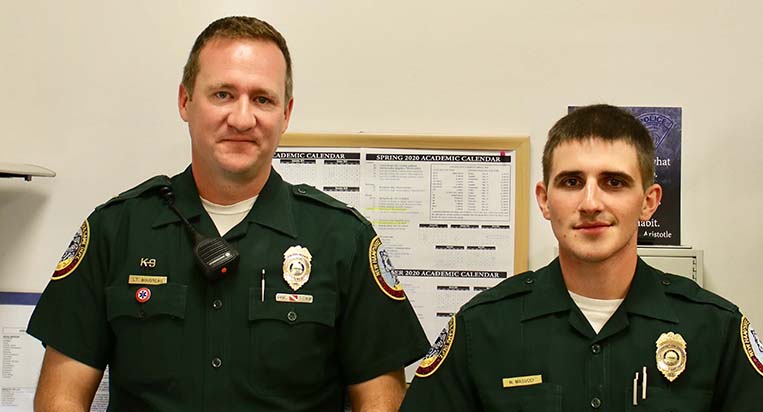 Lt. Bill Boudreau and Officer Nick Masucci of the New Hampshire Fish and Game Department recently spoke to students in three Criminal Justice classrooms about the application process, employment opportunities and the anything-but-typical day in the life of a conservation officer.

The officers, who have appeared on Animal Planet’s “North Woods Law” television series, said they respond to conservation- and wildlife-related violations, but also to drownings or water-related recoveries since they are the only state dive team in New Hampshire.  Their duties include protecting natural resources, interviewing suspects, conducting investigations, issuing warnings and summonses, appearing in court, coordinating and taking part in rescues and body recoveries, and assisting other local, state, and federal agencies whenever necessary. Their work takes them outside through all four seasons and they often must traverse very rugged terrain.

They encouraged the students to apply to multiple law-enforcement agencies rather than just their first choice since application pools can be quite large.  Masucci advised the students to be persistent when applying for jobs. He said initial rejections from other agencies led him to better prepare for future interviews and, rather than giving up, he continued to apply which led him to the career he enjoys today.

From information submitted by Sandra LaCroix of the Criminal Justice Department.