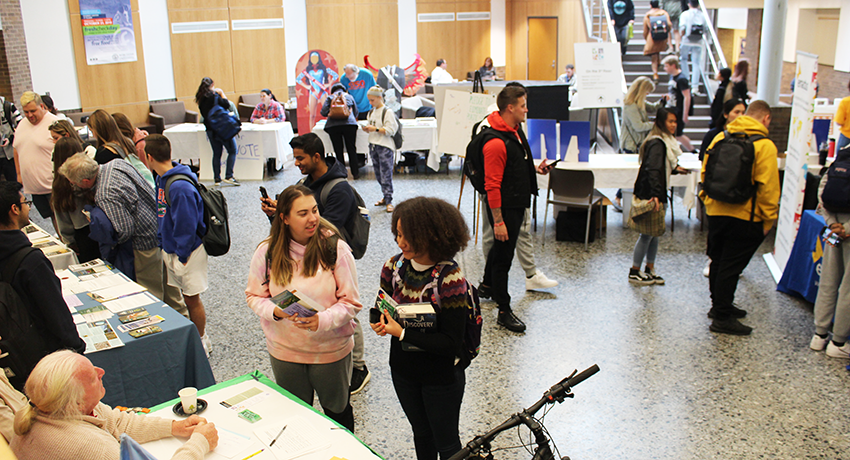 The annual Sustainability and Food Day Fair has become a much-anticipated fall tradition at Worcester State but this year, beneath the fun and festivities, there was an undercurrent of urgency. The event, held Oct. 16 and 17 in the Student Center, was organized around the theme Climate Emergency: Learn and Act.

The two-day event, presented by the Sustainability Office, the Earth, Environment, and Physics Department, the Urban Action Institute, and  Chartwells, encourages students and the campus community to learn about the causes and effects of climate change through lectures, activities, food, teach-ins, and demonstrations, all aiming to show ways to a more sustainable future

A diverse group of faculty members from different departments lent their expertise for lectures and presentations on a range of topics, including “Paper or Plastic,” “Coastal Impacts of Climate Change,” and “The Politics of Organizing for the Climate Emergency.”

The climate emergency theme was chosen to reflect the growing concern about climate among students and the general public, Steven Bandarra, WSU’s sustainability coordinator, said. “We’ve known about it for a long time but we haven’t been doing anything, and we’ve got to start doing something about this,” he said.

Bandarra cited a recent United Nations assessment that determined we have about 10 years to make drastic changes before some of the more deleterious aspects of climate change become irreversible. “Those changes wouldn’t have needed to be drastic if we had started 10 or 20 years ago, but now we need to make rapid change and we’re trying to educate everybody about what needs to be done,” he said.

In addition to the academic lectures, students could also test drive an electric vehicle, take a short hike to Tatnuck Brook and learn about the miles of trails that fan out from there, attend a film screening, meet local farmers and employees of eco-friendly businesses, peruse produce at a farmer’s market, and enjoy a lunch of sustainably produced food choices such as meatless “impossible burgers” and local butternut squash bisque.

Among lectures was “Chemical Mining,” by Henry C. Theriault, Ph.D., associate vice president of academic affairs.  A philosopher by training, Theriault spoke about the ethics involved in mining decisions. He also is an expert on genocide and on Armenia, the location of a devastating genocide early in the 20th century. He chose the controversy surrounding a gold mine in Armenia as a focus while pointing out that similar issues arise in countries around the world, especially poorer nations struggling under of corrupt governments.

Theriault noted that a common mental image of mining—that of people descending a shaft in the ground with a pick and shovel to retrieve chunks of minerals from visible veins—is an outdated one. Most of those veins, with their relatively easy pickings, have already been tapped out. Today, we are more likely to see corporations using chemicals to extract almost imperceptible traces of precious materials.

“Instead of finding pieces of gold, now you have atoms of gold,” Theriault said. “So they use a chemical process that disconnects the gold and then there are ways of extracting it. It’s a very different approach to mining.”

Among ethical considerations is the fact that those chemicals can be very toxic and may threaten water supplies.  “The chemicals that are used might carry some risk. For example, cyanide is often used as part of the process,” he said. “So, this has raised a lot of questions.”

The mine he focused on hasn’t opened yet, although work has begun to prepare for that. Meanwhile, there has been much controversy including large demonstrations that have delayed the mine’s opening. One problem is that the terms of the contract between the international mining corporation and Armenia were negotiated under the previous corrupt government. Beginning late last year through early this year, Armenians replaced that government with a less corrupt one, but the new government might be stuck with the contract if it wants to avoid a massive lawsuit that it can scarcely afford, Theriault said. As a result, it remains to be seen what will happen and, if the mine opens, whether proper precautions will be taken to protect miners, the land, and water supplies.

Theriault’s lecture was one of many geared to teaching attendees about a variety of issues affecting climate and the environment under the theme Climate Emergency: Learn and Act. “That’s the ‘learn’ part and then for the ‘act’ part, we have organizations in the exhibit area that students can join if they want to become active,” Bandarra said. “They can also register to vote here, which is probably the most important thing you can do to save the planet.” 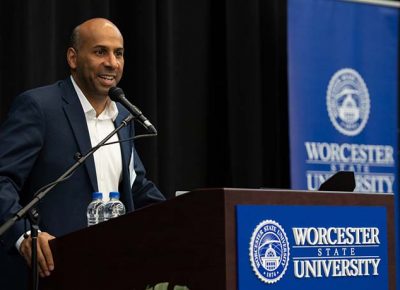 Education experts are asking the wrong questions when tackling a growing academic achievement gap for Latinos in Massachusetts, according to Dr. Pedro Noguera, Ph.D., distinguished professor of . . .