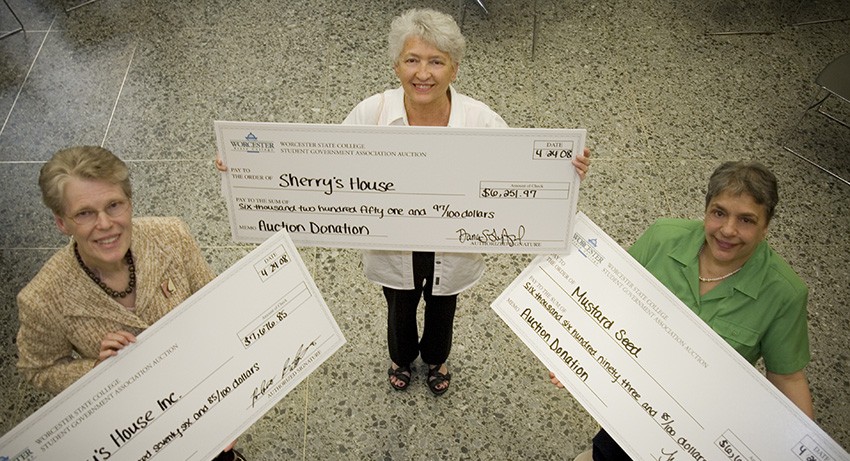 Representatives from the Mustard Seed Foundation, which provides food and emergency services for the city’s homeless; Abby’s House, a local shelter for homeless women and Sherry’s House, a place for Central New England families of children with cancer thanked the SGA and explained ways the money will help with the people they serve.

“You’ve been with us since the beginning,” said Donna Domiziano of Mustard Seed, “you’ve been a big part of our lives.”

Edla Bloom from Abby’s house reported that 89 cents of every dollar donated will go directly to the women and families they serve.  “Thank you for your time, your talent, and your willingness to serve,” she said.

Vice President of Student Services Dr. Sibyl Brownlee reported that the SGA has contributed over $140,000 in proceeds to those in need since the auction began 17 years ago. “The SGA auction is the most highly organized event I have ever seen on our campus,” she said.  “The cataloging of items alone takes hundreds of  hours.”

The auction was made possible by a group of volunteer students, staff, and alumni of Worcester State College. All of the items for the auction are donated by area businesses and families.  Auctions Chairs are Tracy Pilch – Student Government President; Dana Lyford – Class of 2008 Senator and Rob Bilotta –  Commuter Senators.  Auction Committee Members are Liz Rooney – Class of 2010 Senator/Senate Treasurer; Brandon Huggon – Student Trustee; Lauren Kender – Resident Senator; Lindsay Durell – Class of 2010 Senator. The Auction Advisor is Andrea Wamboldt.