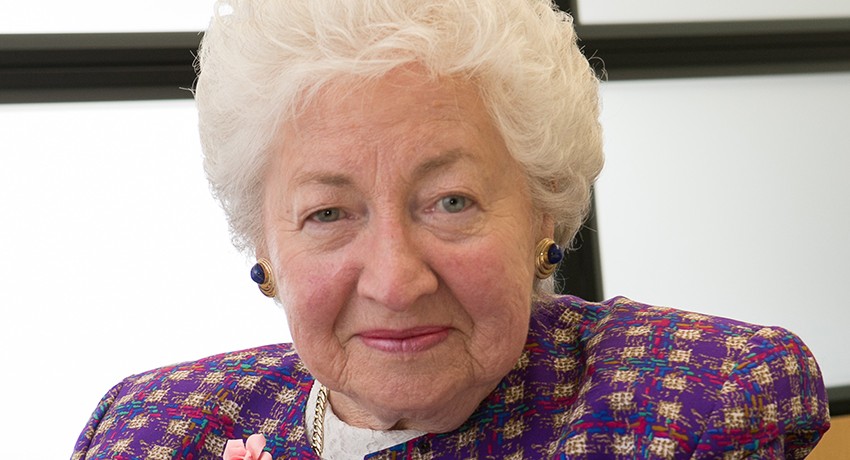 Longtime Business Professor to Be Honored at Scholarship Tea

When professor Maureen Stefanini ’58, Ed.D., was hired in 1967 by Worcester State Teachers College director of student teaching Helen Shaughnessy, she had a mission: train students to be effective teachers. She is very proud of the education WSU provided to students as they prepared to teach at all levels.

“It was always a treat to walk into local classrooms to supervise student teachers because we were rewarded with excellent teaching-learning experiences,” says Maureen. “The guidance provided by the cooperating teachers, many of whom were Worcester State alumni, and the quality and warmth of the student-teacher interaction, was second to none. Our teachers were always in demand because of the quality of the program under Mrs. Shaughnessy.”

But a state law passed in the 1980s slashed funding for local school districts, and suddenly the many jobs previously available to newly minted graduates of the state’s teachers colleges disappeared.  Maureen—and many other trainers of teachers—found herself at a crossroads.

“I wanted my students to have opportunities out there when they graduated, and after Proposition 2 ½, there were far fewer jobs for teachers. I figured, I’d rather teach my students what they can use,” says Maureen.

About the same time, WSU was building a business department and Maureen saw an opportunity to retrain herself to be one of the department’s faculty members. She took a sabbatical and entered MIT as a Sloan Fellow, one of first women to enroll in the prestigious program. Her male classmates, all destined to be captains of industry at successful companies such as Eastman Kodak, Boeing and Martin Marietta, treated her with respect—especially the ones with sisters, she says with a laugh—as they traveled all over the country and Europe learning from the world’s best business leaders.

She says her training as a teacher helped her because she was working with lots of different people. She also credits her husband Edward for being patient and trusting as she engrossed herself in this formative learning experience. “We were definitely learning from the best,” she says.

Now Maureen teaches accounting, entrepreneurship, and business leadership for women, taking special enjoyment in inviting local entrepreneurs to her class, many of them successful alumni. “I love having them come in and talk about what made them successful, and also to talk about failure, which is equally important,” she says.

“I love keeping up with my students and having them feel like they can come to me with anything and feel confident they will be treated like an equal,” she says.

Maureen has served as the advisor to the Sigma Beta Delta business honor society and the Kappa Delta Pi education honor society. For the past 20 years, she has also been a member of the Scholarship Committee, which awarded three scholarships during its first year in existence. In 2014, the committee awarded 254 scholarships.

“It is heart wrenching to read the stories in the scholarship applications. So I like to tell people that your contributions, however small, make big differences in lives of our students,” she says.

In recognition of Maureen’s many years of service to Worcester State, she will be honored at this year’s Scholarship Tea on May 3. The Scholarship Tea is an annual event that recognizes outstanding citizens whose work stimulates the vitality, health, and success of their communities. To attend, please contact the Alumni Office at alumni@worcester.edu or 1-888-972-2586. 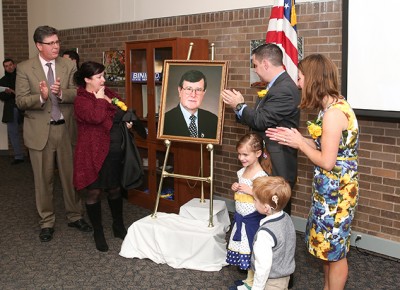 An overflow crowd of family, friends, and politicians gathered in the Blue Lounge for the official renaming ceremony for the Honorable John J. Binienda Center for Civic Engagement on Thursday, April . . .