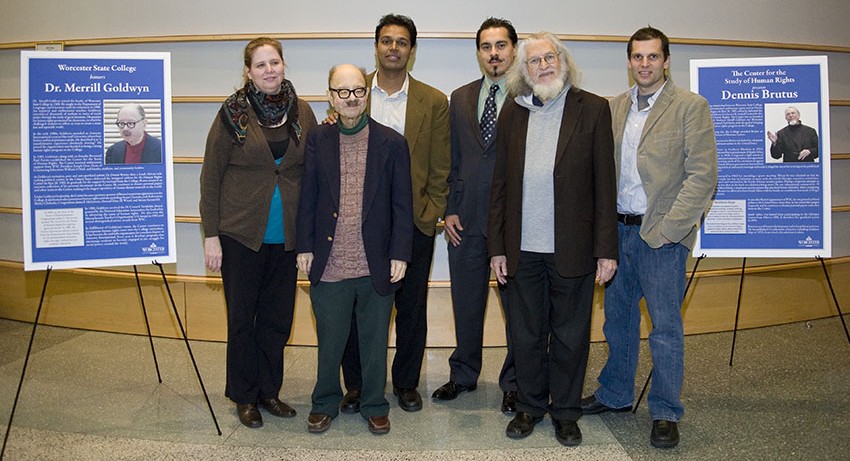 Worcester State College Vice President of Institutional Advancement Thomas McNamara announced the creation of the Merrill Goldwyn Fund to honor the man who co-founded the college’s Center for the Study of Human Rights Thursday, November 20, at a poetry reading and social justice event featuring noted South African Poet and human rights activist Dennis Brutus. “The vision that Merrill had more than 25 years ago will continue to blossom and promote the cause of social justice for many years to come,” said McNamara.  The announcement and poetry reading culminated a week-long series of events and discussions with Brutus and other notable scholars.

Dr. Goldwyn co-founded the Human Rights Center at Worcester State College with Reverend Paul Ferrin. Merrill was an English professor at Worcester State College for 30 years, from 1968 to 1998. “In his classrooms, Merrill introduced thousands of students to issues of social justice through the study of great literature. He consistently challenged students to reflect on ways to create a more just and equitable world,” said McNamara.

In the early 1980s, Merrill attended an Amnesty International event at Harvard University, where four former political prisoners spoke. He was transformed by the experience and decided to bring a strong human rights program to the College.

In 1982, he helped establish the Center for the Study of Human Rights and invited Dennis Brutus to be the inaugural speaker. This was the beginning of a long and wonderful relationship between Dennis and the College.

In addition, McNamara announced establishment of the Richard and Dolores Greene International Student Human Rights Scholarship. This scholarship will be given to international students from countries with documented human rights violations. Preference will be given to students from Haiti, the poorest nation in the Western Hemisphere. “The Greenes understand the power of education to change the status quo. By extending support to these international students, they are planting seeds of positive change in countries around the world,” said McNamara.

He also recognized Jacqueline and Steven Keenan for their historic financial gift to the College. Jackie and Steve met when they were members of the Peace Corps working in West Africa. “They have devoted much of their lives to working for social justice, and they have been staunch supporters of the Center for the Study of Human Rights for many years,” said McNamara. “Steve was a guest lecturer for the Center a few years ago, and the support that he and Jackie have provided has been invaluable.”

Throughout the week, Brutus, Wayne Kamin, Josh Rubenstein, Nikhil Aziz, Thomas Poniah, and other prominent scholars and activists engaged students in some thought provoking discussions of social justice and human rights. They examined topics including racial discrimination, political prisoners, global poverty, and the challenges of globalization.

The Center also sponsors a student chapter of Amnesty International and facilitates student-led initiatives that address social justice. For example, a few years ago it supported students who organized a conference presentation about the Darfur genocide and today addresses efforts to address hunger both at the international and at the local level.

The United Nations General Assembly adopted the Universal Declaration of Human Rights on December 10, 1948, in the aftermath of WWII– by a vote of 48 in favor, 0 against, with 8 abstentions (all Soviet Bloc states, South Africa, and Saudi Arabia).

Among the nations voting in favor of the UDHR, Great Britain was still engaged in trying to maintain its empire and the U.S. still had legal segregation of blacks and whites.

AI emerged in the 1960s out of frustration with the lack of enforcement of the principles laid out in the UDHR. The organization works for the release of prisoners of conscience who haven’t used or advocated violence—those who have been jailed or otherwise persecuted for expressing their views.

Dennis Brutus also spoke, expressing his gratitude to WSC for the important role it played “In my personal struggles and the struggles of others.” He explained that under the apartheid government of South Africa, it was a crime for those who opposed apartheid to talk to more than two people at a time. If you opposed the government and talked to three or more people, you could be arrested and jailed.

He was arrested and shot while trying to escape and eventually imprisoned. When he was released he was exiled. He taught in the UK before coming to the US to teach. He received notification that he was going to be deported. The UK wouldn’t allow him to return. Rhodesia, his birthplace, was too dangerous, as was South Africa. Had he been returned to South Africa, he believes he would have been killed.

During his struggle for political asylum, Dr. Merrill Goldwyn invited him to come to give the inaugural address for the new Center for the Study of Human Rights, which Dr. Goldwyn founded. “Merrill was part of the campaign to keep me in the country,” said Brutus. Thanks to support from WSC and many others, Brutus was granted asylum in 1983. He has worked with Josh Rubenstein and others in AI on issues of oppression. He said: “There are so many who need help. There is so much you can do if you choose to become involved in Amnesty International and join the struggle for social justice.” 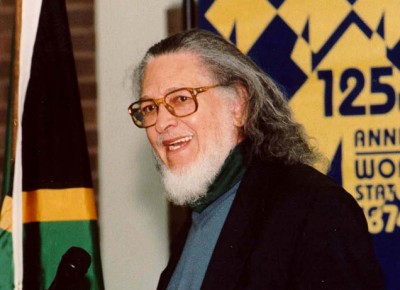 Worcester State College will welcome noted South African poet and human rights activist Dennis Brutus to its campus November 17-20 for a series of events focusing on social justice.  The series, . . .