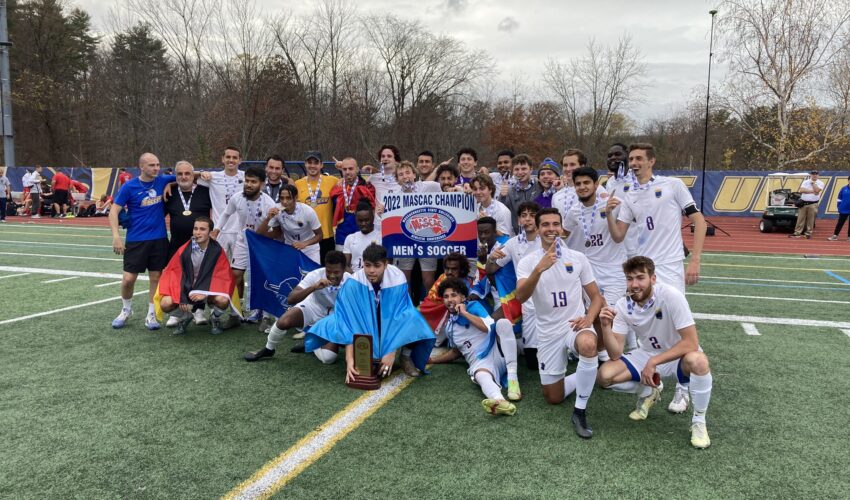 The teams went into overtime tied in front of a lively crowd at Coughlin Memorial Field and the Lancers captured the win in penalty kicks (5-4) with the final score 1-1. This will be the men’s soccer team’s first trip to the NCAA’s since 2016 and they will play Stephens Institute of Technology from Hoboken, N.J. 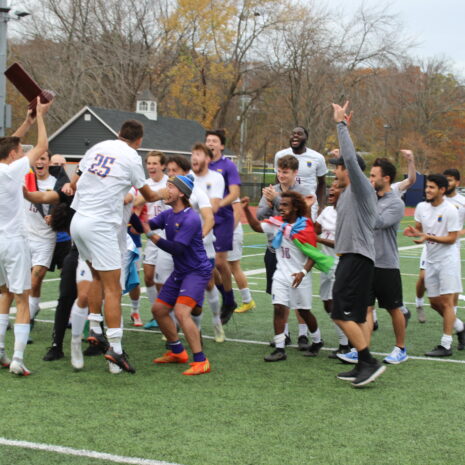 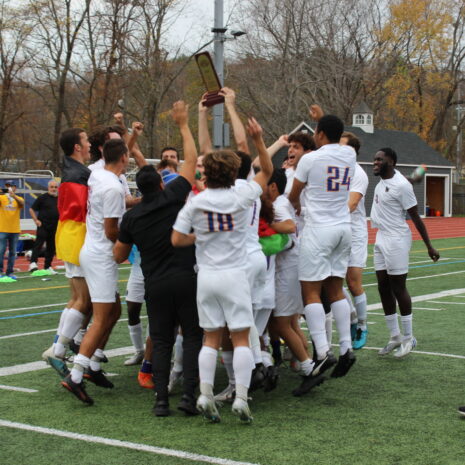 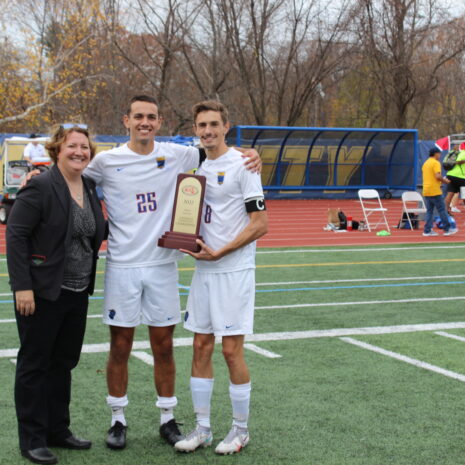 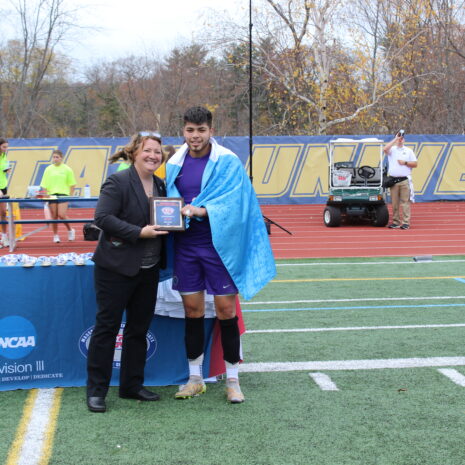 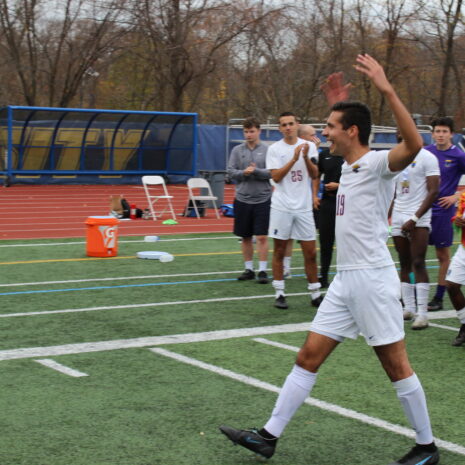 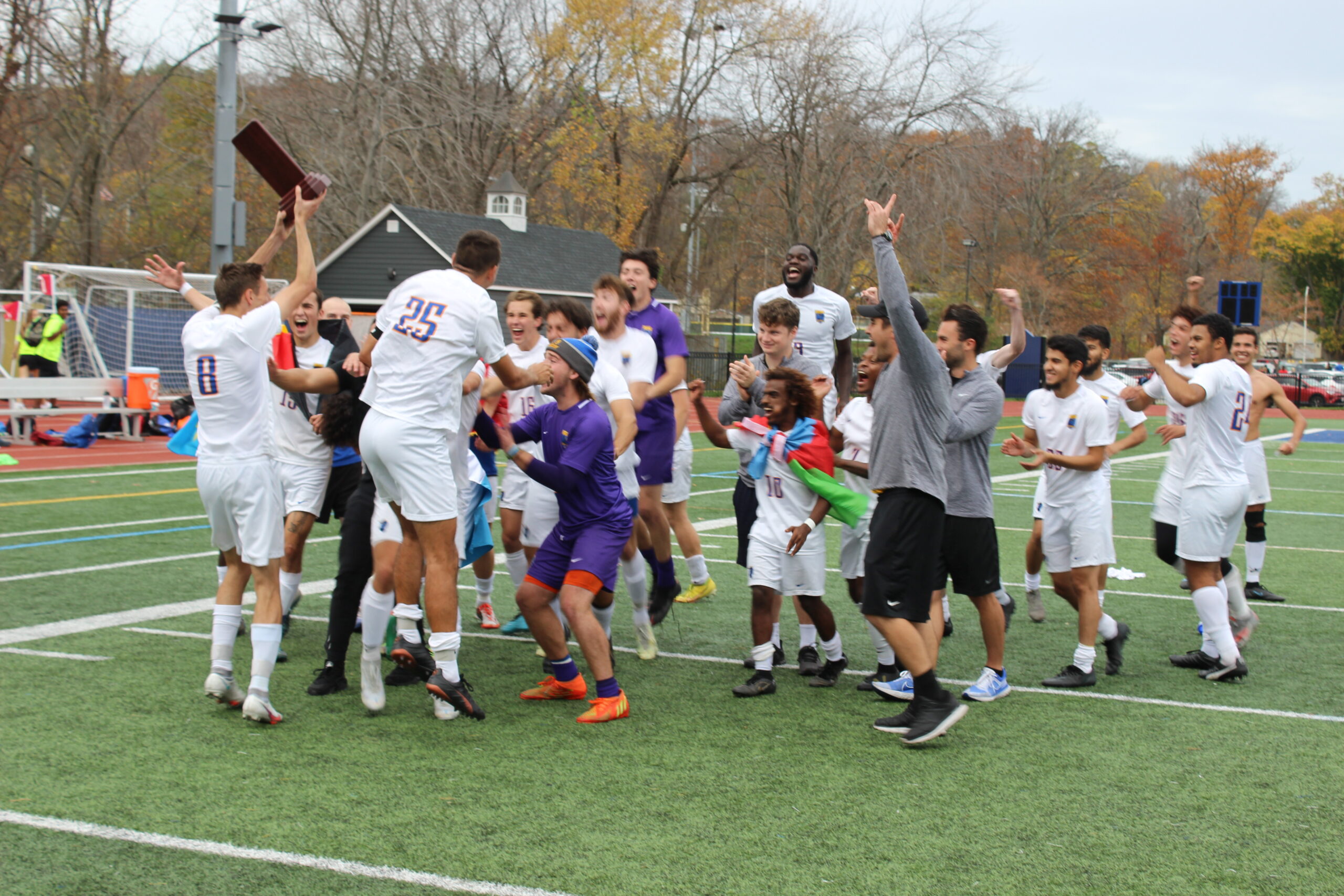 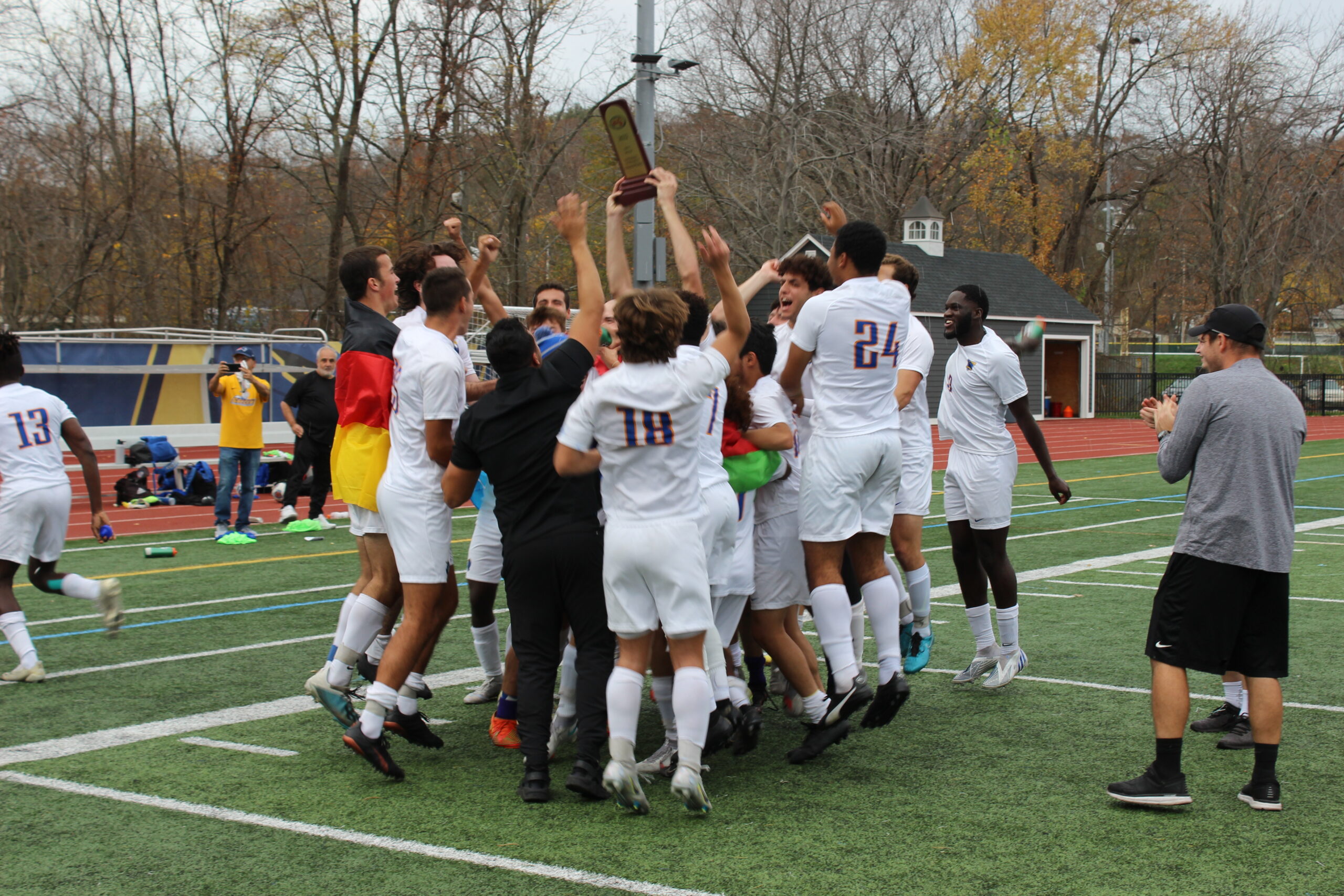 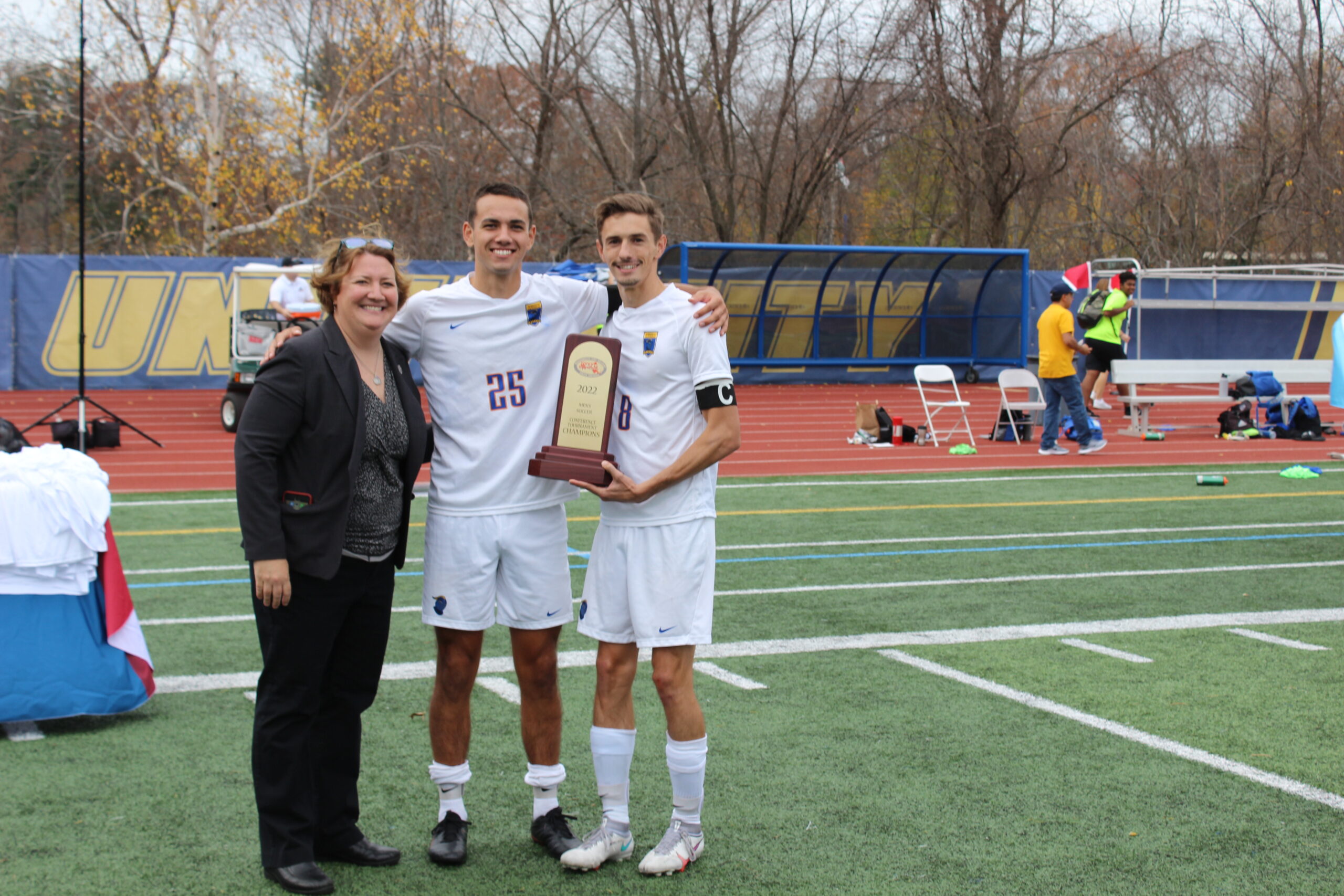 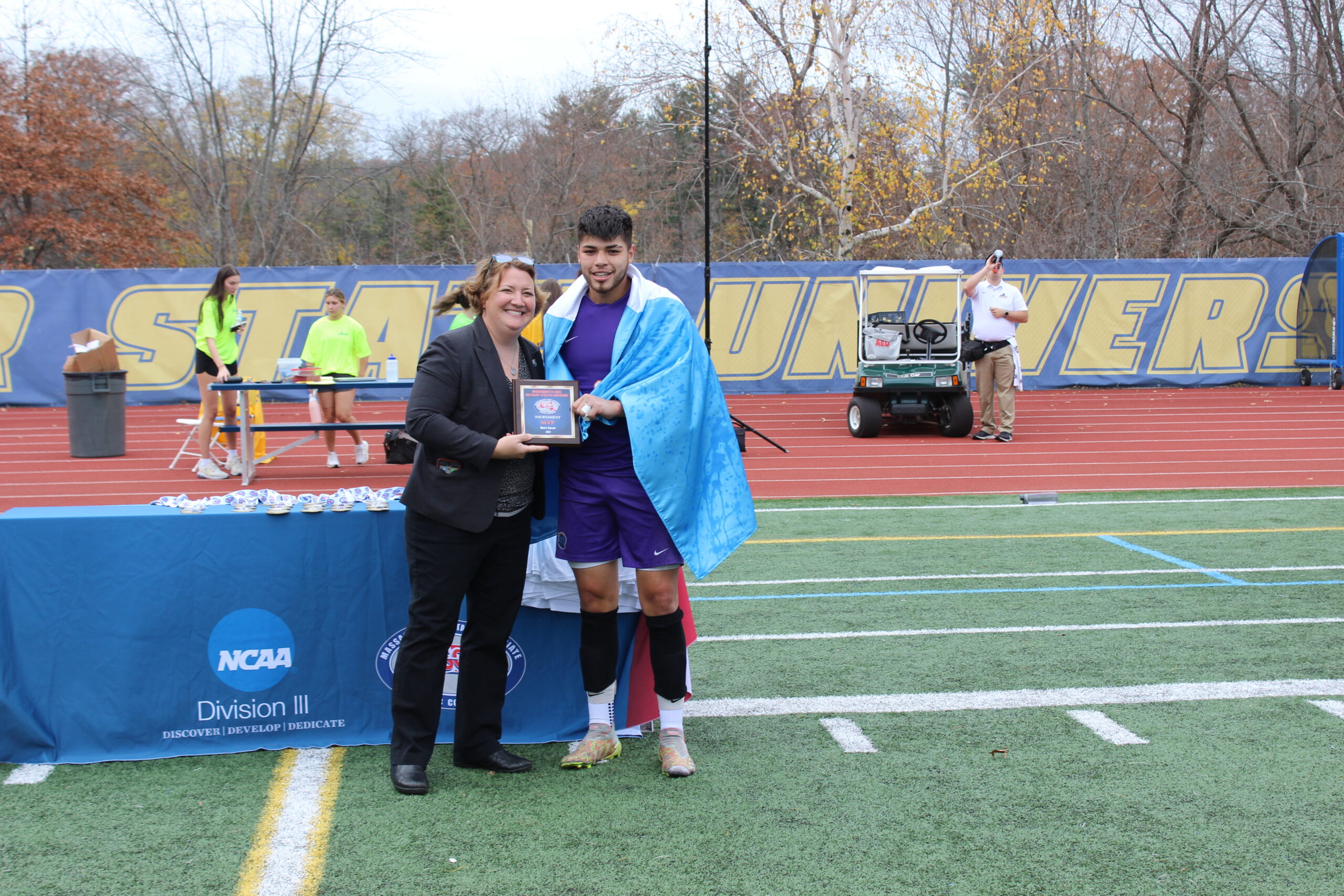 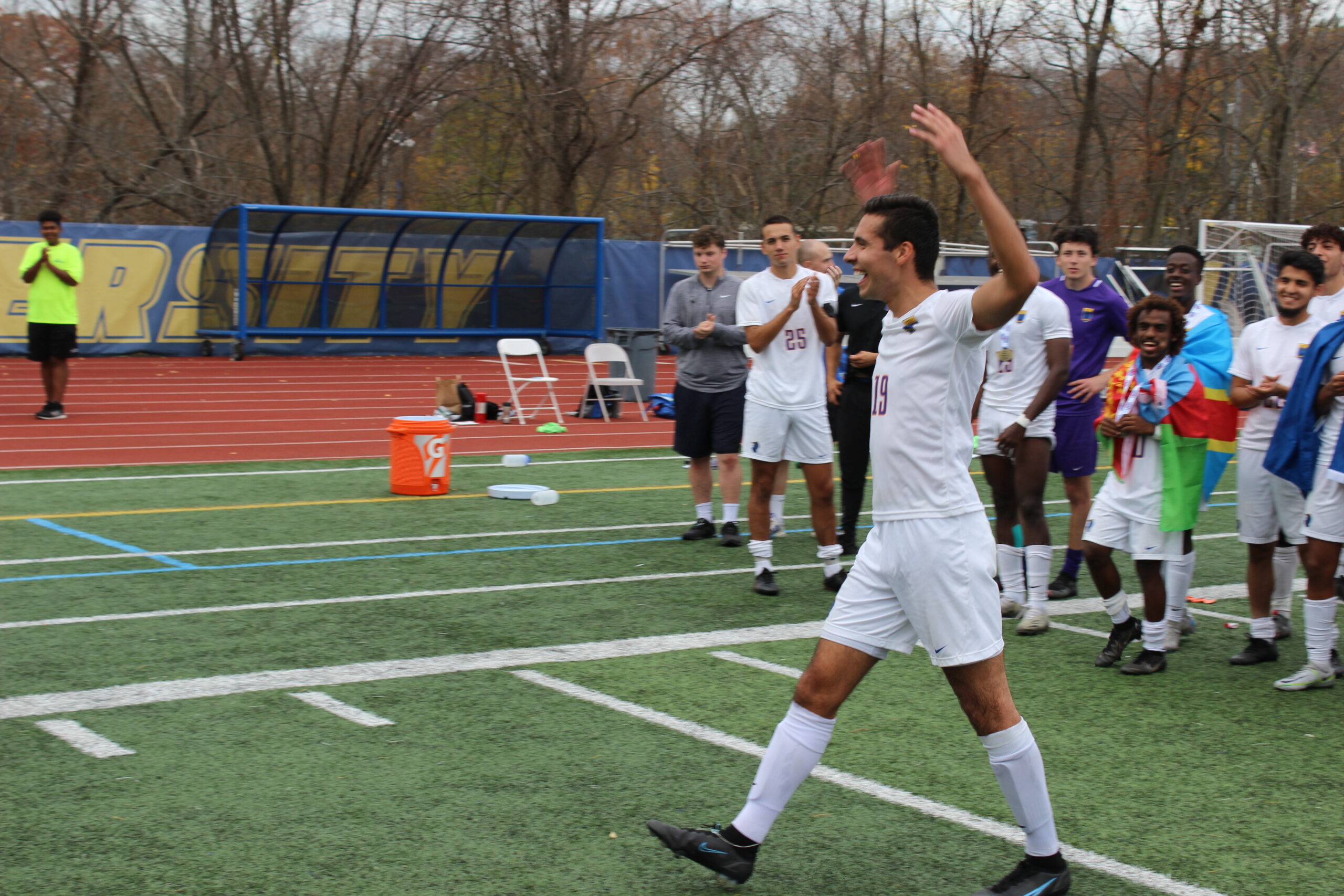 Ethan Escobar #19 sent the final PK kick in that ultimately won the shoot out that clinched Worcester State's win over Bridgewater State on Nov. 6.

“I am extremely proud of this group,” said Head Coach Aidan Abolfazli. “They showed resilience and character all season long. We are looking forward to representing Worcester State University and the MASCAC in the NCAA Tournament.”

Just seven seconds into the match a yellow card was issued to Senior Midfielder Isaac Stephen (Shrewsbury, MA), followed by ten minutes of the ball going back and forth with no shots recorded. Worcester State finished the first 45 minutes with eight shots total, including a near goal from sophomore forward Jamal Mohamud (Worcester, MA), which was eventually called off as Mohamed was ruled offside. Bridgewater finished the first half with three shots.

Bridgewater’s senior keeper William Russell had an impressive first half, saving five shots on goal, while the Lancers’ Andy Ramirez (Waltham, MA) recorded one save of one shot.

The second half started off with a number of shots coming from both sides of the field. The stands lit up in the fifty-fourth minute as Mal Hawkins (Los Angeles, CA) connected with a pass from Taylor Gavaletz (Dudley, MA) to give Worcester the first goal of the game. The intensity rose in the stadium as Bridgewater and Worcester lobbed balls up and down the field looking for another opportunity to put the ball into the back of the cage. With just 16 seconds remaining in regulation Bridgewater’s LaFontant snagged a loose ball as the Worcester defense attempted to clear it out of the box and knocked it over Ramirez to tie the game up and force overtime action.

The first overtime saw each team take a single shot as they worked to dictate the pace of action, but each attempt went wide of the cage. The second 10 minute overtime brought more of the same with the Lancers finding the lone shot in the second overtime which forced a quick leaping touch by Brigewater’s Russell. The following corner was quickly handled by the Bears defense, neutralizing the only real threat of the overtime action.

With the overtime periods remaining scoreless the action shifted downfield to focus on the goal as each team set up for the penalty kick attempts to win the game. Bridgewater most recently had success on Friday when they defeated Framingham State at Framingham in penalty kicks to advance to the championship game. That momentum looked early in the PKs to be carrying the Bears as Worcester State senior Patrick Mbarushimana’s (Worcester, MA) kick was saved by Russell. Bridgewater sent their first three past Ramirez before a diving save on an Ethan DeMelo’s attempt tied each team at three out of four made.

Each team would make their fifth kick, setting up a sudden goal round that saw junior Ethan Escobar’s (Paxton, MA) goal sail into the back of the net, while Filippo Mucci’s attempt banged off the cross bear bringing Worcester State the victory and a trip the the NCAA tournament, their first, since 2016 and first under second year head coach Aidan Abolfazli.

Bridgewater finishes their season at 7-8-4, 4-2-1 in conference, after a remarkable post season that saw them upset the tournament #1 seed to advance to the championship game. Worcester State now sits at 10-3-7, 4-0-3 in conference. 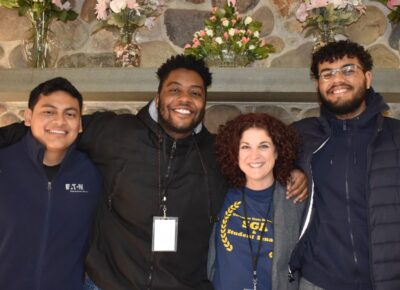 Kristie McNamara, director of the Office of Student Involvement and Leadership Development, has received the National Association for Campus Activities (NACA) Northeast’s highest honor, the Donald . . .