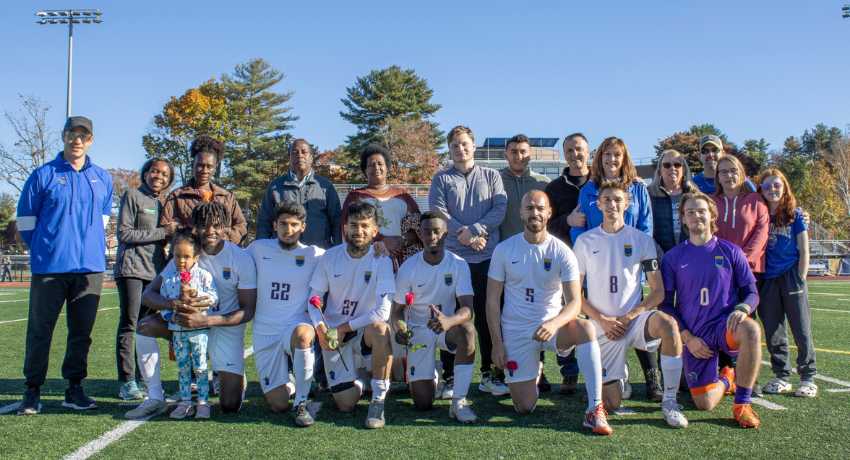 The Worcester State Men’s Soccer season wrapped up their 2022 season Saturday with a loss in the Division III NCAA first round to #4 ranked Stevens Institute of Technology, after capturing the MACAC Championship title the week before.

The Lancers, who finished last season with a record of 3-11-1, and 2-5 in the conference, had a completely different journey this season with a perfect balance of returners, first years and new additions to the program. Each game saw the squad meld and become more and more unified as they strove to their goal of a MASCAC Championship. With the championship, they headed to New Jersey on Nov. 12 to take on the Ducks.

The first half of the game statistically would appear to have been Stevens’ game, but with the Worcester State defensive wall that has served them well all season – the Lancers recorded 10 shutouts all year – knocked away each opportunity the Ducks were able to put together. Worcester State, who ended the season with a .89 goals-against average on the season lived up to their reputation stopping all seven attempts by Stevens.

The Ducks were the first team to strike, with two quick attempts in the 6′ and 7′ minute of action, but the strong defensive pressure saw the shots sailing wide of the cage. The first real opportunity for Stevens came 20′ minute in when a shot off the foot of Sean Mascur was directed toward the cage, but the Worcester State defense worked as one to block the shot and turn the action away from their cage. Mascur had another golden opportunity in the 31 minute that was again turned away by a stellar Worcester State defense.

In the 40 minute of action a defensive clearance from Worcester worked its way up the middle of the field, where a pass outside to the left found the foot of sophomore Jemal Mohamud (Worcester, MA) who carried it down the sideline whisking past the Stevens defense. A beautifully placed cross found a streaking first year Brady Iovanni (Lunenburg, MA) in the center of the box, where he wasted no time sending the pass past Stevens goalkeeper Justin Cross for the first scoring action of the day.
The crowd erupted with excitement and anticipation after the goal, as both teams worked to maintain control for the remaining minutes in the half. The Lancers would ultimately neutralize the Stevens attack to take the 1-0 lead into halftime.

Coming out of the half the Ducks amped up their already high attacking pressure on the Lancers looking for the equalizer early in the half. Their first attempt came just 5 minutes in with a shot that was blocked away by the defense. Stevens continued the high-pressure limiting Worcester’s movement up the field for their own attacking opportunities and forcing the Lancers to battle down on defense to repel the pressure. In the 68′ minute, the Ducks finally found the gap they were looking for with a pass across the box from the right finding the foot of Luca Campbell who sent the ball into the top right just past a leaping junior Andy Ramirez (Waltham, MA). The score now tied at 1-1, the Ducks did not release their pressure, knowing the quick multi-dimensional approach of the Lancer offense required continued pressure. The Lancers maintained their solid form led by graduate student Alexander Papageorgiou (Tewksbury, MA), junior Matt Alzamora (Holden, MA) and Ramirez on defense, but five minutes later the Ducks were able to squeeze another past the line off the head of Terry Thompson who sent a Ramirez save right back past the goaltender.

Stevens, knowing the offensive threat of the Lancers attacking line was not comfortable with a simple goal advantage and spent the remainder of the match working to put in another goal for added cushion. The Lancers junior Manny Ramirez (Waltham, MA), sophomore Mal Hawkins (Los Angeles, CA) and sophomore Waseem Mahmoud (Northborough, MA) were relentless in moving the ball up and into scoring positions but were unable to connect with a real threat on the Ducks. In the final 5 minutes of the game Stevens was finally able to secure their added insurance goal with another Luca Campbell goal, who managed to spin around the defense and knock the ball around the pressure. That ended up being the final goal of the match for either team as the Lancers hard fought stand ended with the 3-1 final against the top seeded team in the Hoboken NCAA Regional.

The Lancers were led by Hawkins, Iovanni and junior Ethan Escobar (Paxton, MA) , whose magic foot helped carry the Lancers to the NCAA Tournament in the penalty kick round versus Bridgewater St. almost a week ago. Ramirez made two saves in the afternoon in his 90 minutes of action. 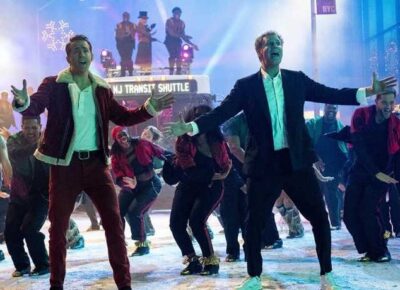 As Visual and Performing Arts Professor Steve Gagliastro gears up for his 13th season in Hanover Theatre’s presentation of “The Christmas Carol,” the community can also catch him soon on the . . .