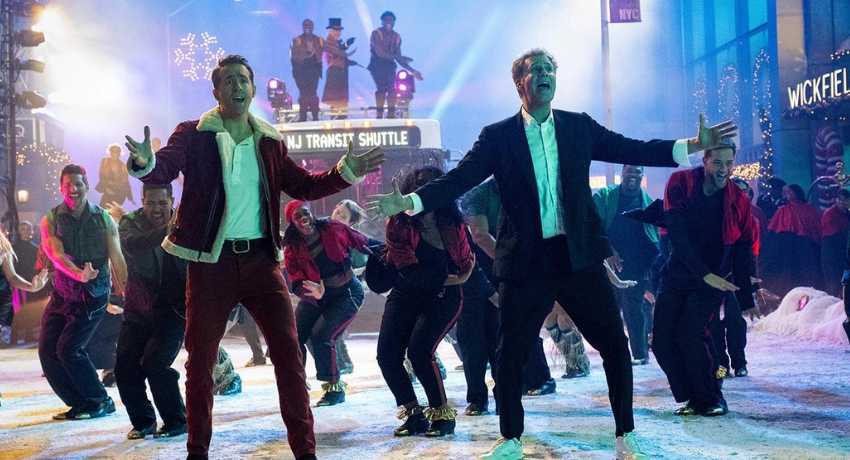 As Visual and Performing Arts Professor Steve Gagliastro gears up for his 13th season in Hanover Theatre’s presentation of “The Christmas Carol,” the community can also catch him soon on the big screen in the upcoming film “Spirited,” a comedic spin on the Charles Dickens novella with movie stars Ryan Reynolds, Will Ferrell, and Octavia Spencer, and music by the famous songwriting team of Benj Pasek and Justin Paul. 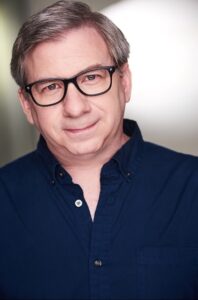 Gagliastro, who presently provides music lessons to 12 voice students and one trombone student at Worcester State University, plays the principal role of Walter the Janitor in the movie set to be released in select cinemas on November 11 before its streaming release on November 18 by Apple TV+.

On stage soon in Hanover Theatre’s “The Christmas Carol,” Gagliastro plays the role of Mr. Fezziwig, the character who the young Ebenezeer Scrooge apprentices under.

In the movie “Spirited,” Gagliastro said his character constantly gets on the nerves of his boss, Mr. Alteli, a character played by P.J. Byrne of the Martin Scorsese film “The Wolf of Wall Street.” Main ghosts played by Will Ferrell, Patrick Page, Sunita Mani and others observe Gagliastro in the movie through filming that took place in July 2021 at the Copley Plaza in Boston.

“The experience was a bit surreal,” said the professor who also frequently plays trombone on campus with Worcester State Jazz. “One interesting thing is that it was the very first day of principal photography for the project. Dancing and singing rehearsals had been taking place for many weeks, but this was day one of shooting. I was the very first person in the makeup trailer for the entire movie. Most of the time, you step onto set and the production has been chugging along for a while already. However, the crew and directors were feeling each other out and finding the rhythm of working as a team.”

“It was also a pleasure to work with the director Sean Anders, his assistants and the entire cast and crew present that day,” he added. “And, yes, I did briefly meet Will Ferrell and Ryan Reynolds – both were super nice.”

In 2006, the Commonwealth of Massachusetts put into effect a film tax credit incentivizing filmmaking in the state by providing production companies a credit for 25 percent of state payroll and production expenses, an initiative that prompted nearby Devens, Mass. to become known as the “Hollywood of the East.” In addition to his upcoming work in “Spirited,” the professor has also earned speaking roles recently in “The Tender Bar,” “Don’t Look Up,” and “Julia,” to name a few major films.

“As always, it’s a blessing just to be asked to read for any speaking role,” he said. “It is always extremely satisfying to book a role, however small, as there are so many talented people in Massachusetts also reading for the part. Most of the work we do as actors is never seen outside of the audition room, so it’s nice to show your efforts to the world.”

The affable professor who is humble through outstanding achievements and quick to offer a smile, kind greeting, and fascinating acting story on campus added his thankfulness for his wife and frequent audition partner Annie Kerins, who he describes as a fine actress in her own right, and his parents Kathleen and Jack Gagliastro, who once took courses himself at Worcester State.

“VPA Music is proud to have Steve among the faculty members bringing their exceptional performance experiences to our classrooms and studios for students interested in a wide range of musical styles and disciplines,” said VPA Applied Music Coordinator and Professor Kyle Martin. “As a friend for many years, it’s been wonderful to follow Steve’s interdisciplinary successes, including this latest film. We look forward to seeing what he does next!” 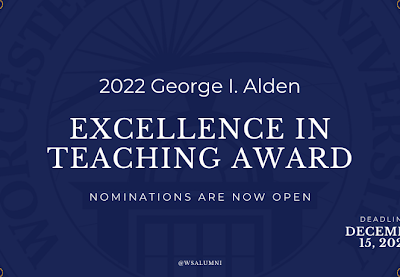 Nominate a professor for the Alden Excellence in Teaching Award

Worcester State alumni, students and faculty are invited to nominate faculty members who have inspired, encouraged and supported them for the 2022 George I. Alden Excellence in Teaching Award. The . . .