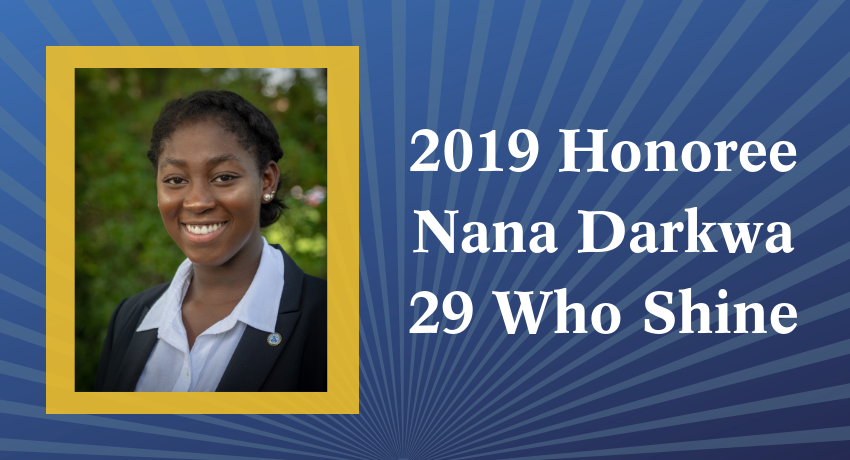 Nana Darkwa to be Honored Among “29 Who Shine”

Graduating senior Nana Darkwa will represent Worcester State University as one of Massachusetts’ “29 Who Shine” during a ceremony May 3 at the State House, honoring one outstanding graduate from each of the commonwealth’s public higher education institutions.

A sociology major and political science minor with a 3.75 GPA, Darkwa serves as a Presidential Student Ambassador regularly representing the university to dignitaries and members of the community.  She has been an Orientation Leader, a three-time Volleyball Varsity member, and has been employed in the WSU Division of Continuing and Graduate Education for four years.

Darkwa, of West Springfield, is a high-achieving student with recognized leadership skills who is also committed to helping others. She has an abiding interest in public policy and education and plans to attend law school at Suffolk University, with a focus on public defense.

Darkwa is the Founding Student Ambassador to the Edward M. Kennedy Institute for the U.S. Senate. In that capacity, she works with the educational staff of EMK Institute on its school and college-aged programs. Darkwa has led groups of high school AP and Honors students as they engage in negotiation practices and debates on key constitutional issues such as the Electoral College and Ranked Choice Voting.

While Darkwa’s work with the EMK Institute has been exemplary, her other accomplishments and attributes and strong record of academic achievement and civic engagement speak to an on-going contribution to the well-being of her university community and the Commonwealth.

Darkwa was nominated for the “29 Who Shine” honor by Mark Wagner, director of the John J. Binienda Center for Civic Engagement at Worcester State, which serves as the university’s connector to the EMK Institute, and Marilyn Cleary, assistant dean of graduate and continuing education. Darkwa has identified Wagner and Cleary as her mentors.

“Dr. Wagner has been an inspirational and crucial part to my education at Worcester State University,” she says. “Without the Binienda Center, I would not have the opportunity to do what I love the most – reaching out to the community or serving as Student Ambassador to the EMK Institute and all of the doors that internship has opened for me.”

Darkwa said Cleary has been both a mentor and a confidant during her time at Worcester State.  “She has asked me to take on challenging work and has taught me how to develop myself professionally,” she said. “She is a terrific mentor and I know that I can always reach out to her for advice no matter where I go.”

“Nana is very hard working and gives back so much to the world around her,” Cleary said. “She is always willing to help a fellow student or community member. Her outgoing personality and love of learning is energizing to all of us who are fortunate enough to interact with her on a daily basis.” 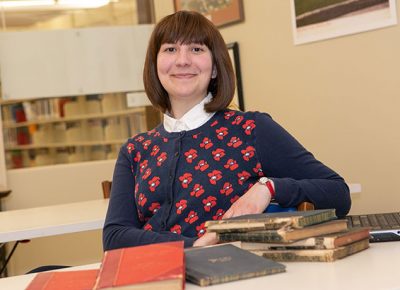 According to a student diarist in the early days of the Worcester Normal School, an “explosion” occurred in the afternoon of April 15, 1879, which resulted in the loss of someone’s top. Another . . .