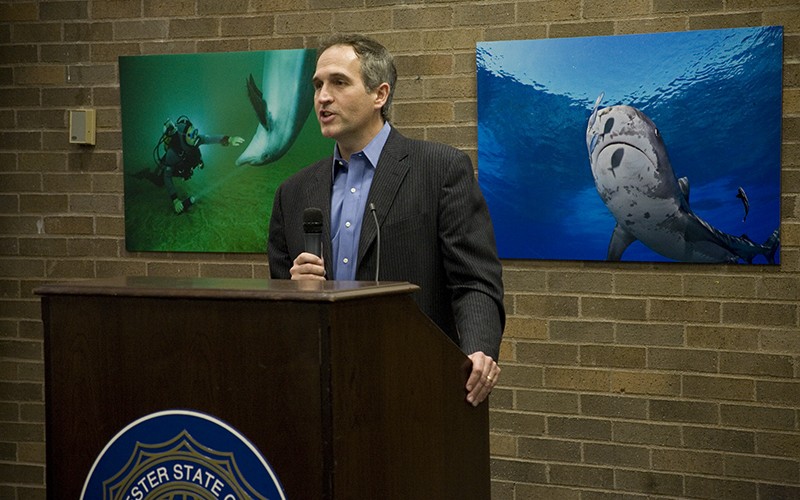 Skerry is a photojournalist specializing in underwater subjects and stories. Since 1998 he has been a contributing photographer for National Geographic Magazine covering a wide range of assignments. His images have also been featured in magazines such as People, Sports Illustrated, US News and World Report, National Wildlife, Playboy, Smithsonian, Esquire, Audubon, BBC Wildlife, Outdoor Life, Wildlife Conservation, GEO, Maxim, Men’s Journal, and in countless publications worldwide.

Skerry is also the photographic correspondent for Sport Diver Magazine, which features his monthly column IMAGES. He is the author/photographer of Complete Wreck Diving, A Whale On Her Own – The True Story Of Wilma The Beluga Whale and Successful Underwater Photography (with Howard Hall) and was the principal photographer for Lost Subs.

Skerry, who studied communication at Worcester State, painted a vivid picture of the loss of marine life around the globe for students. “We are fishing down the food chain,” said Skerry. He pointed to the decline of fish like cod, which are being replaced with fish that were considered unsuitable for eating only a few years ago, such as monk fish and orange roughy.

In addition, he said that the methods to harvest this wild life are not being managed properly. He pointed to one photo of a fisherman holding one pound of shrimp alongside the image of pounds of unwanted fish that were trapped in the net which died and were tossed back into the ocean as trash.

He also told the students and their families of the marvels in the ocean. “The blue fin tuna never stops growing. In fact, it has been revered since the time of Aristotle. If we were to leave them alone, they would grow to over 2,000 pounds. Many of these animals are more magnificent than lions and tigers and we don’t eat lions and tigers.”

In an interview, Skerry urged students to find their passion and pursue it. After a high-paying career in sales, he gave it all up to “follow his bliss.” By slowly building a portfolio of images in New England, he was able to expand his work and opportunities to the entire world. “Figure out who it is you want to be and talk to people who are successful doing what you want to do and don’t give up.  Get used to rejection and embrace risk-taking.”