Noted Author Angela Davis to Speak at WSC in April

Through her activism and her scholarship over the last decades, Angela Davis has been deeply involved in our nation’s quest for social justice. Her work as an educator – both at the university level and in the larger public sphere – has always emphasized the importance of building communities of struggle for economic, racial, and gender equality.

Worcester State College’s Third World Alliance, Diversity Office and Multicultural Affairs Office are proud to host noted author and lecturer Angela Davis to address the topic, “Capitalism: The Movement Against Access,” Wednesday, April 1, 2009, at 7:00 p.m., in the Sullivan Auditorium. Her lecture is part of the college’s “Courageous Conversations,” series which featured noted author and lecturer Cornel West last year.  Her talk will be followed by a book signing at 8:30 p.m.

Davis is the author of eight books and has lectured throughout the United States as well as in Europe, Africa, Asia, Australia, and South America. Her teaching career has taken her to San Francisco State University, Mills College, and UC Berkeley. She has also taught at UCLA, Vassar, the Claremont Colleges, and Stanford University. She has spent the last fifteen years at the University of California Santa Cruz where she is Professor of History of Consciousness, an interdisciplinary PhD program, and Professor of Feminist Studies. 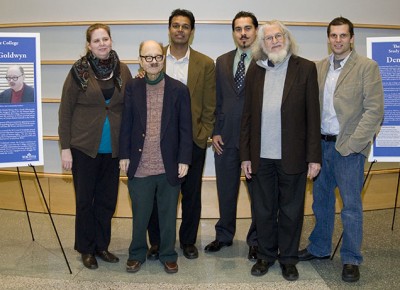 Worcester State College Vice President of Institutional Advancement Thomas McNamara announced the creation of the Merrill Goldwyn Fund to honor the man who co-founded the college’s Center for the . . .